You are at: Home » Slider » In your yard: fireflies (lightning bugs)

As a child, did you catch fireflies (lightning bugs) and watch them in a jar? Millions of kids around the world have done just that. In May, June, and July, when fireflies show up, even adults still find them enchanting. And, not only do they have this phenomenal “flashlight” in their body, they hold other surprises, too.

Here’s the first surprise: Fireflies aren’t flies, at all. They’re beetles! They number about 2,000 species around the world that inhabit temperate and tropical climates. Another thing is that some of them even have larvae or wingless females that glow. (Called glowworms, they were the impetus for a popular 1953 tune, Glow Worm,1 sung by the Mills Brothers.) More than 150 species inhabit North America, predominately east of Kansas, and they’re the state insects of Tennessee and Pennsylvania.

Fireflies belong to the order Coleoptera, and the family Lampyridae. Fossil evidence shows they date back at least 26 million years, to the Paleocene Epoch, but sad to say, they’re now facing extinction. Why? Humans: Our developments cause loss or degradation of habitats, especially wetlands and forests; light pollution interrupts their flash patterns, which makes it hard for them to find mates; and our use of insecticides that kill not only them but also the prey any survivors might have fed on. 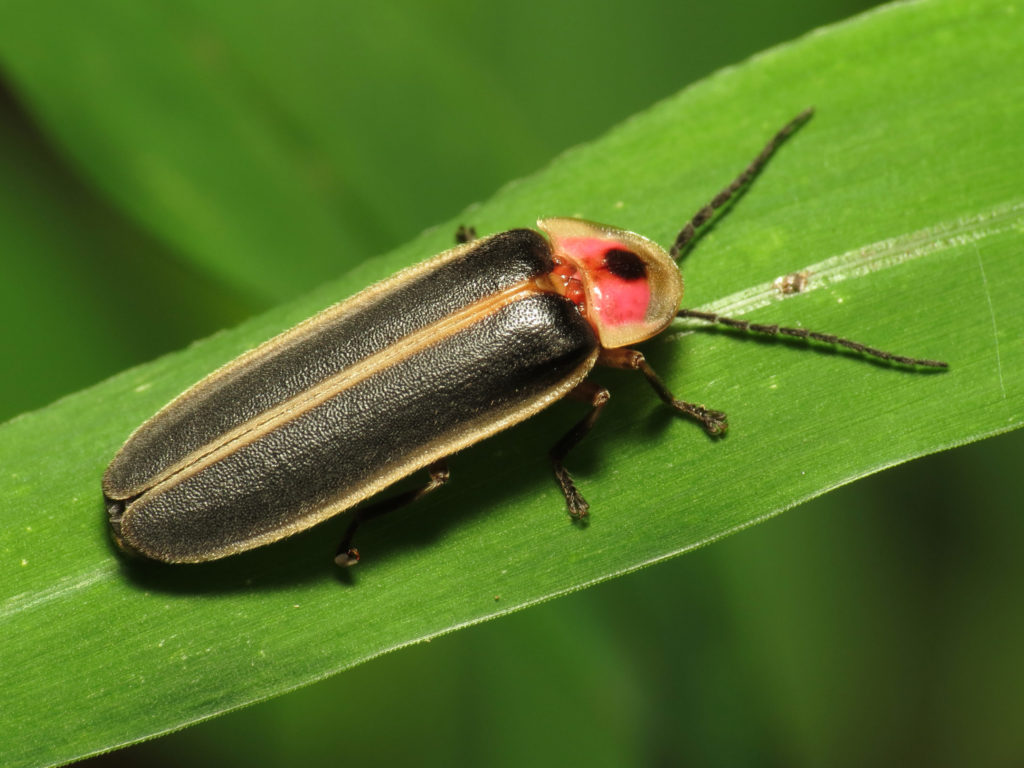 Fireflies vary in color, shape, size, and antennae. They range from 0.375 up to, more commonly, 1.0 inch (9.5 mm to 25 mm) in length. Their overall coloration is generally brown. Like all other insects, they have three body parts—head, thorax, and abdomen—which are protected by a hard exoskeleton (their larvae have a soft, flexible exoskeleton). 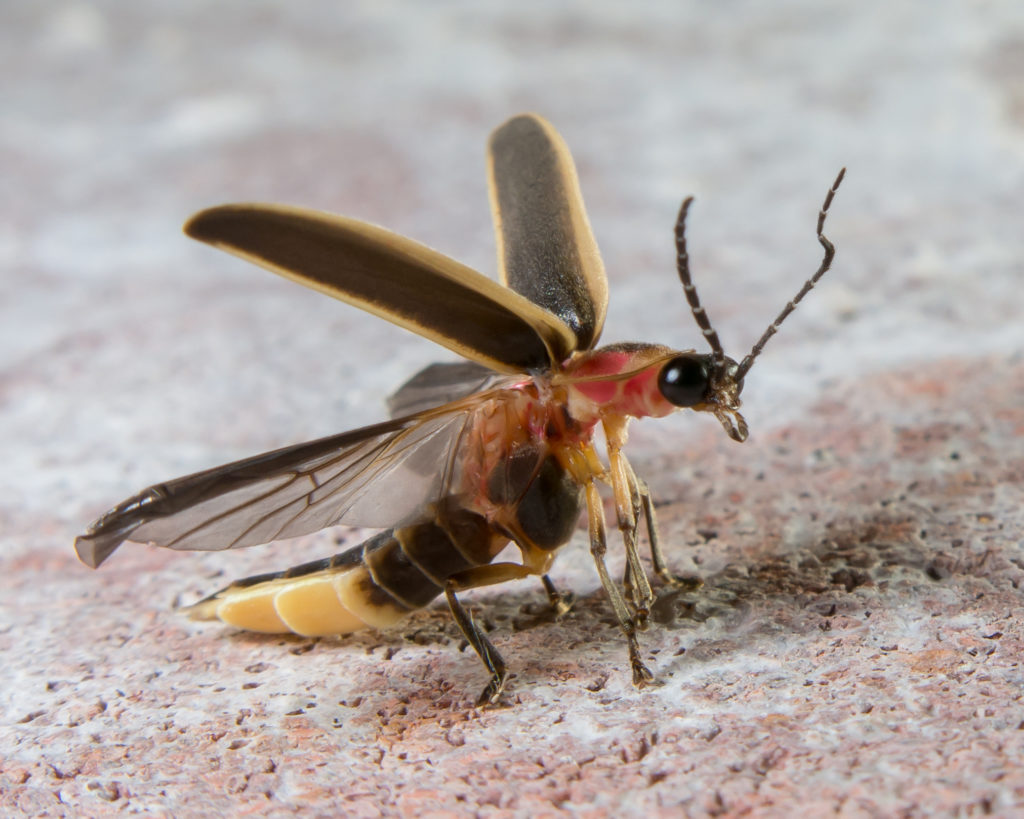 The head has two large compound eyes and two antennae. Attached to the thorax are three pairs of legs that have joints, and two pairs of wings. The forewings are hardened and look a bit leathery. They’re called elytra (ELLA-truh) and cover the hind wings when the insect’s at rest. They’re raised out of the way for flight.  More about an insect’s anatomy

A firefly’s light is the result of a chemical reaction called bioluminescence. The process is complex, but basically, what happens is this: First, the firefly injects oxygen into light-emitting organs, called photocytes, that are on the underside of its abdomen (the location varies among species). That incites luciferase (an enzyme) to oxidize a compound called luciferin.2  The luciferin, which glows under certain conditions, then responds by lighting up. Calcium and adenosine triphosphate (a molecule that produces chemical energy) also play a role.

Fireflies make their light with higher efficiency than any other bioluminescent creature. It’s 40 percent efficient, which may not seem like a lot, but, by comparison, a standard incandescent light bulb shines with only 10 percent efficiency.

A firefly’s light may be yellow, green, or orange, depending on its species. The bioluminescent light is referred to as “cold light,” because it has no infrared or ultraviolet component, which would generate heat. The insects can start and stop reactions by controlling oxygen into their photocytes. (Some fireflies are active in the daytime and do not flash.)  How beetles breathe 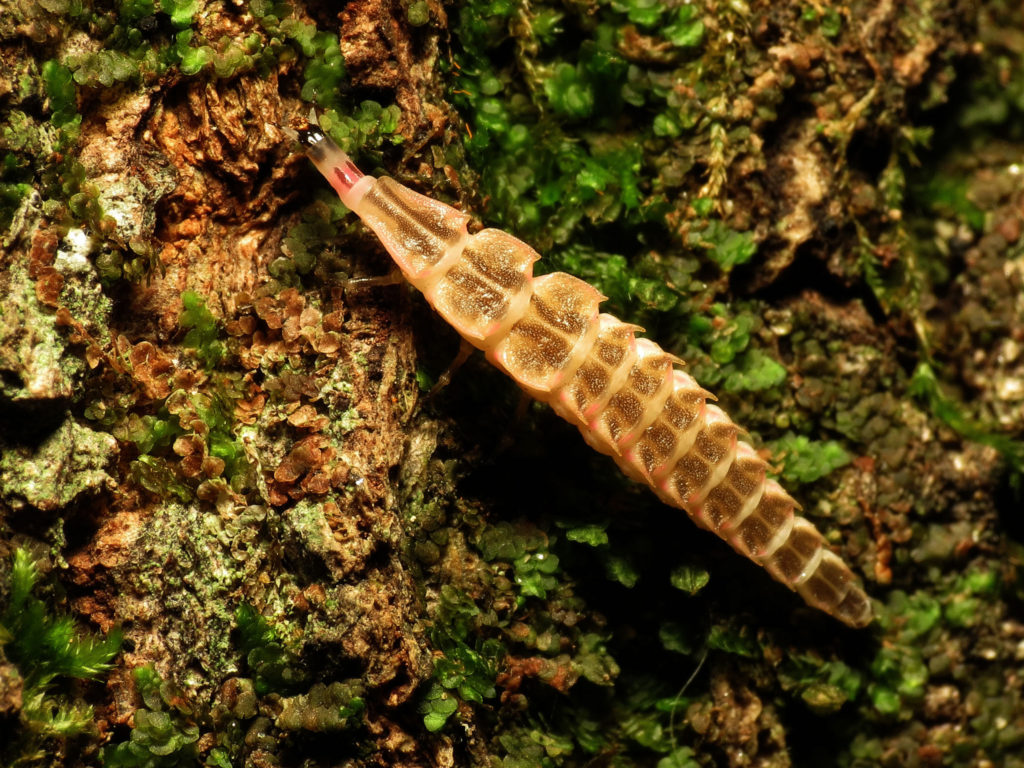 Their bioluminescence is vital in the adult stage, as it helps them locate others of their kind, and, more importantly, suitable mates. Their flashes follow a pattern and are species-specific. They may be as simple as a single flash up to a series of pulsing flashes, or even a continuous glow.
In some cases, both sexes flash; in others, only the male. Some don’t do it at all, or only their larvae light up, and the adults do not. Others use both flashing and pheromones to attract mates.

There are also species with wingless females that “glow,” but they’re usually unseen because they stay hidden under leaf litter or other organic matter. Male Synchronous Fireflies, Photinus carolinus, are multi-talented—they may flash randomly, synchronize their flashes, or even flash in waves across the hillsides of the Great Smoky Mountains where they’re commonly found.  See them on video

To attract females, males fly around flashing until chosen by one of the females who are observing them from the ground or while perching on vegetation. A female chooses a mate based on his flash pattern (and pheromones, with some species). When one interests her, she answers with a flash of her own. A few days after mating, she lays about 500 eggs singly or in groups, in or on damp soil. In some species, the eggs glow and will flash when gently tapped. Eggs hatch in about a month.

The larvae, sometimes called glowworms, live in rotting wood, forest litter, and under bark, and feed until the end of summer. Ahead of winter, they burrow underground or move under tree bark to hibernate, in some cases, up to several years. They emerge in the spring and feed for several weeks. Then, it’s time to pupate, and they spend one to three weeks inside a hard exterior “pupal case” made up of their old exoskeleton. Inside it, their soft body transforms into a winged, sexually mature adult form. They’ll live three to four weeks, just long enough to find a mate and reproduce.

Adults feed on pollen and nectar, but their lives are so short that some don’t eat at all. Larvae feed on worms, snails, and slugs, after injecting a paralyzing neurotoxin to subdue them. A few species have aquatic larvae that feed on aquatic snails until it’s time to move onto land.

Fireflies use their flashes to defend their territories. But, they’re also a warning to predators: Bite me and you’ll be sorry! That’s because their blood contains chemicals that are bitter-tasting to most animals, and even poisonous to some. (Note: Fireflies should never be fed to pet reptiles.) Predators soon learn not to attack.

Fireflies like warmth and moisture. Most live in fields, forests, and marshes near rivers, lakes, ponds, streams, ponds, and other wet areas.

You may be fooled into thinking any bug sporting a light is a firefly, but some are not. The larvae and adults of “click beetles” belonging to the genus Pyrophorus have two glowing lights on the back of their head and one under the abdomen. Railroad worms, the larvae of beetles in the genus Phrixothrix, have green lights lined along their body and red lights on their head. These groups don’t flash, however.  Glowing click beetle

Here’s the best way to do it, kids: Use a net to gently entrap fireflies. If using only your hand, don’t squeeze; they’re fragile. If you want to watch them for a while, carefully put them in a jar that holds a moist paper towel or some leafy twigs. Puncture the lid to let in air. Watch them for no more than a day or so and then let them go at night, so they can carry on with their lives.