You are at: Home » Slider » If you see this, it must be fall: Black and yellow Garden Spiders

Black-and-yellow Garden Spiders are scary-big and they don’t seem to mind building their large webs in full view, where they can’t be ignored. As though they’re daring us to bother them! Giant web, huge spider, we stay away!

Odd thing is, we usually don’t see them until the fall. Where were they all summer? Why does such a large, shy spider stay hidden all that time and then decide to pop up like magic, in full view? Seemingly overnight, there’s one in our garden, perched in the center of a web the size of a serving platter. Or worse! Suspended between potted plants on the patio or plant hooks on the deck!

Entomologists have a theory about their fall debut: Throughout the summer Black-and-yellow Garden Spiders are smaller and weaker, less able to defend themselves from predators. Wisely, they hide. By fall, though, they’re full size, ready to fight back and to take on all comers!

Their Latin name is Argiope aurantia (AR-gee [or jee]-OH-pee; ahr-RAN-cha). They belong to the order Araneae (ar-RAIN-ee-eye or ee) and the family Araneidae (AIR-uh-NEE-uh-die or ee). A fossil found in China of an extinct species, Argiope furva, shows that their genus dates back to at least 15.97 to 11.608 million years ago (Miocene Epoch). Because their web is so distinctive — large, spiral and wheel-shaped — Argiopes are in a group called orb-weavers. Many of them are brightly colored.

Black-and-yellow Garden Spiders are uncommon in parts of the Rocky Mountains and the Great Basin, where there’s little vegetation. But, otherwise, they’re found throughout most of the continental U.S., Hawaii, southern Canada, Mexico and Central America.

In addition to the Black-and-yellow Garden Spider, three other Argiope species inhabit North America. (You’ll find their photos at the bottom of this page.) Around the world there are 3,500 species — all are rather large, have colorful abdomens and construct webs made of white silk.

No threat!
Black-and-yellow Garden Spiders aren’t dangerous to humans. They aren’t aggressive. They don’t bite, unless severely provoked, such as repeatedly poking at them. They’re predators of insects, including those we consider pests, so they’re beneficial to have around. Leave them alone and they’ll return the favor while helping to control insect populations. If forced to bite, their venom is harmless to humans, and the pain is comparable to a bee’s sting.

Physical description
The Black-and-yellow Garden Spiders that catch our attention are all females. As with many other spider species, the males are tiny by comparison. Not including their legs, males are only 0.20 to 0.35 of an inch long (5 to 9 mm), while females are 0.75 to 1.10 inches long (19 to 28 mm). Males are also pale in comparison to the colorful females, as you can see here. 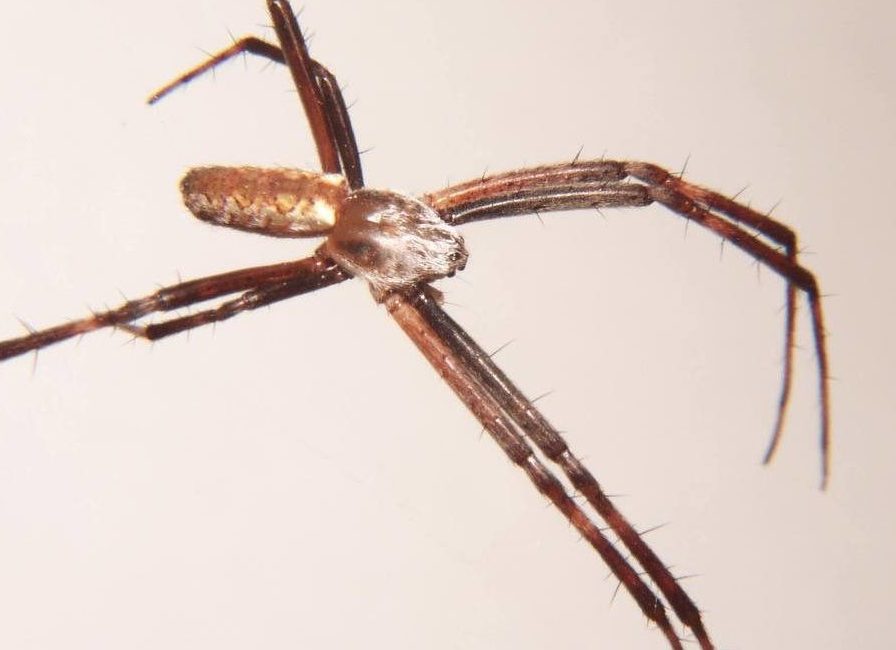 The Black-and-yellow Garden Spider’s Latin name, Argiope aurantia, means “gilded silver-face.” That’s fitting, as most (not all) do have silvery hairs covering the front part of their body and a yellow (gilded) and black abdominal pattern. Their eight legs are black with red or yellow markings. Each foot has three claws, whereas, most spiders have two. Their extra claw is used to help handle threads as they spin their webs. Their bite is venomous and immobilizes their prey (not humans, though).

They have eight eyes, but their vision is poor. Instead of using eyesight they sense vibration and air currents to tell them about their environment. Spiders don’t have ears, but recent research involving a family of spiders called “jumping spiders” has shown that the hairs on their legs are so sensitive they can detect sound from several feet away — it’s likely that other spiders, perhaps Argiopes, too, can “hear” in this way. They also can smell and taste through sensory hairs on their legs and other parts of their body.

More about spiders and their anatomy

Life cycle
Males roam around until they find a female. When they do, they usually construct a web nearby and begin courting. To communicate, the male plucks and vibrates the female’s web. (Males usually have a drop line ready when they approach females — occasionally, a hungry female will eat her mate!)

After mating, the female lays her eggs on a sheet of silk and covers them with a layer of silk topped by another layer of paper-like silk. Then, she bundles them into a roundish ball, which she places in her web, off to the side or sometimes near the center. She’ll produce up to three, rarely four, egg sacs during the summer. Up to one inch (25 mm) in diameter, each sac may hold from 300 to more than a thousand eggs. She keeps careful watch over them.

Black-and-yellow Garden Spider eggs hatch in late-summer or fall. The hatchlings are like tiny adults, except they lack mature reproductive organs. They stay within their egg sac, in a state of dormancy, through the winter. They grow ever larger through the summer, shedding their exoskeleton (molting) several times to make way for their growing bodies. Now, full circle and a year older. By late summer and fall, they’re now a year old, fully grown and sexually mature. That’s when we begin to notice the females. They’ll mate, lay eggs and the cycle begins again. It goes like this: 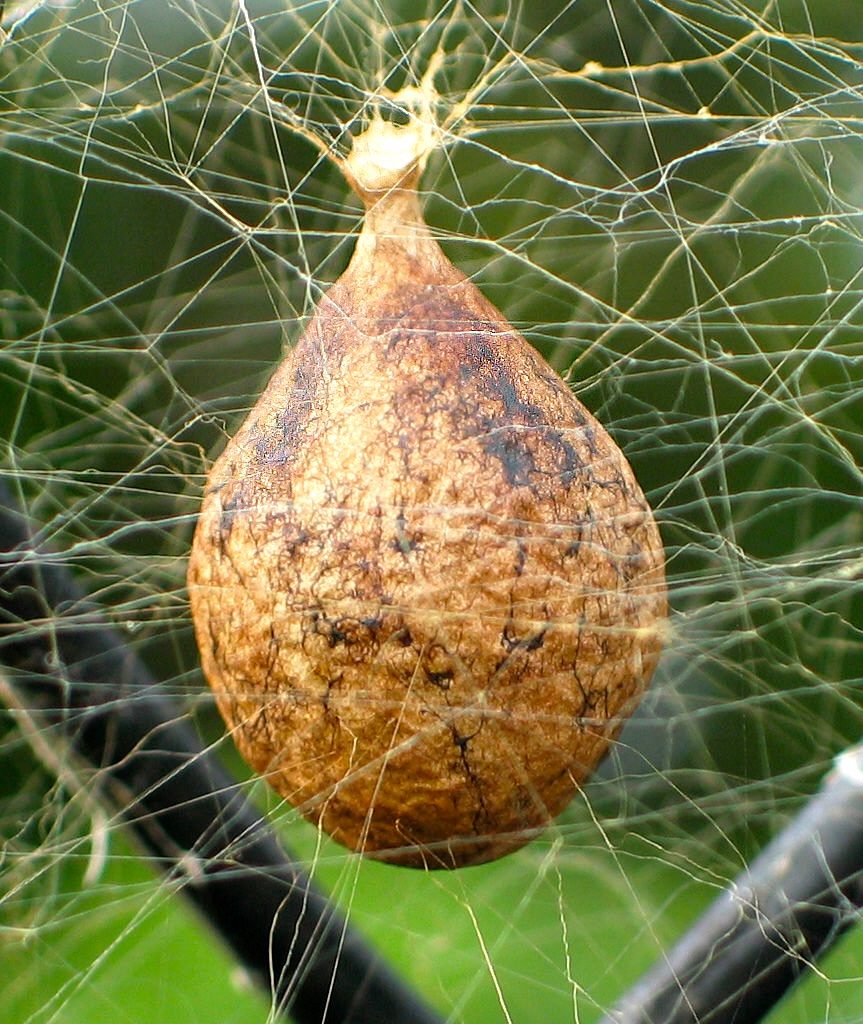 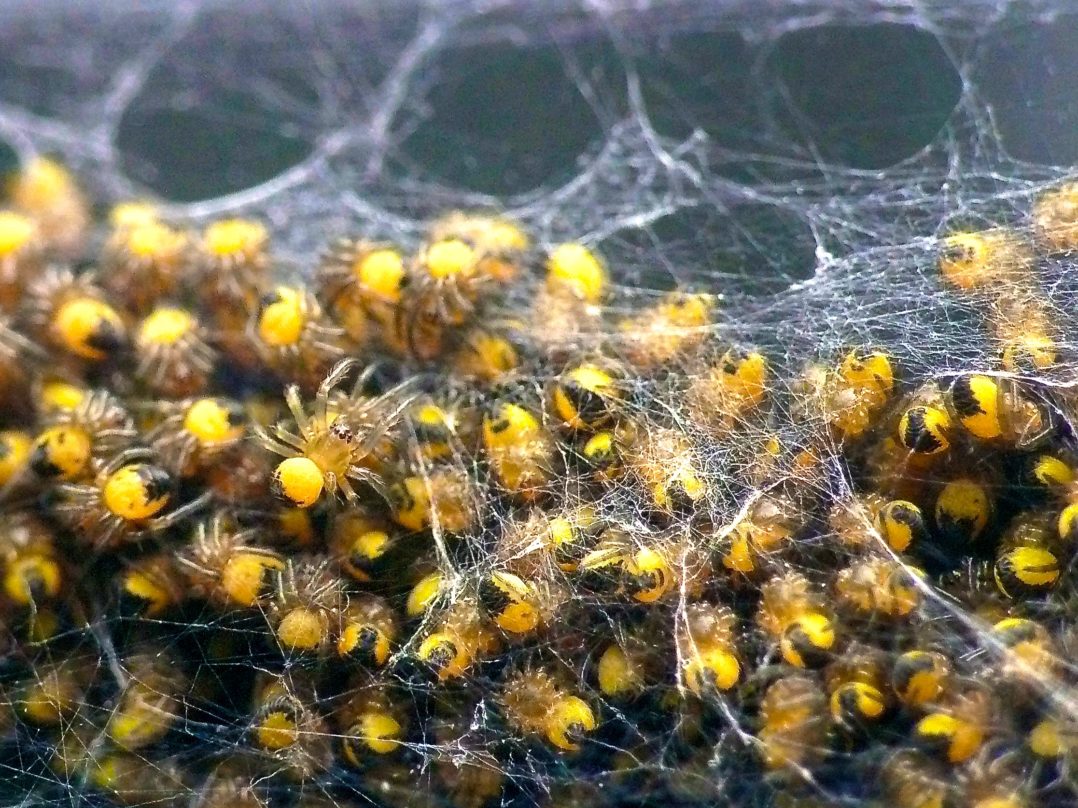 Webs
A female’s large, distinctive web may be up to 2 feet (60 cm) in diameter. In the center of it, she lays a dense, silk zigzag pattern, known as a stabilimentum. There are other species of spiders that do this, too, but it isn’t understood why.

There are several theories: The “decoration” helps to camouflage the spiders as they sit in the center. It makes the web appear larger. It’s used to regulate excess silk. It attracts males to females. It attracts prey. Or, its highly visible strands prevent birds from flying through and destroying the web.

She hangs head down in the center to await prey, holding her legs together in pairs, so it often looks like she has only four legs, instead of eight. She might also await prey from the edge of her web.

Below is a link to an animation showing how a web is generally built. In the case of Black-and-yellow Garden Spiders, a final touch is added, the stabilimentum. Scientists don’t know why they do it, but surmise it attracts prey, provides stability or possibly warns birds away. Another interesting thing about the web: The entire circular part of the web (seldom the radial framework) is eaten at night and rebuilt. Lifespan
In temperate climates, female Black-and-yellow Garden Spiders live from their hatching in the fall to the first hard frost the following year. Males die after mating within their first year. In warmer climates, females may live for several years.

Prey and predators
For food, Black-and-yellow Garden Spiders feed on virtually any insect (although, it’s usually a flying one) that gets caught in their web. They’re preyed on by birds, lizards, wasps, shrews, and others. They defend themselves from predators by first vigorously vibrating their web — this may make it harder for predators to home in on them. If that fails, they drop to the ground and hide. Their egg sacs are also preyed on. 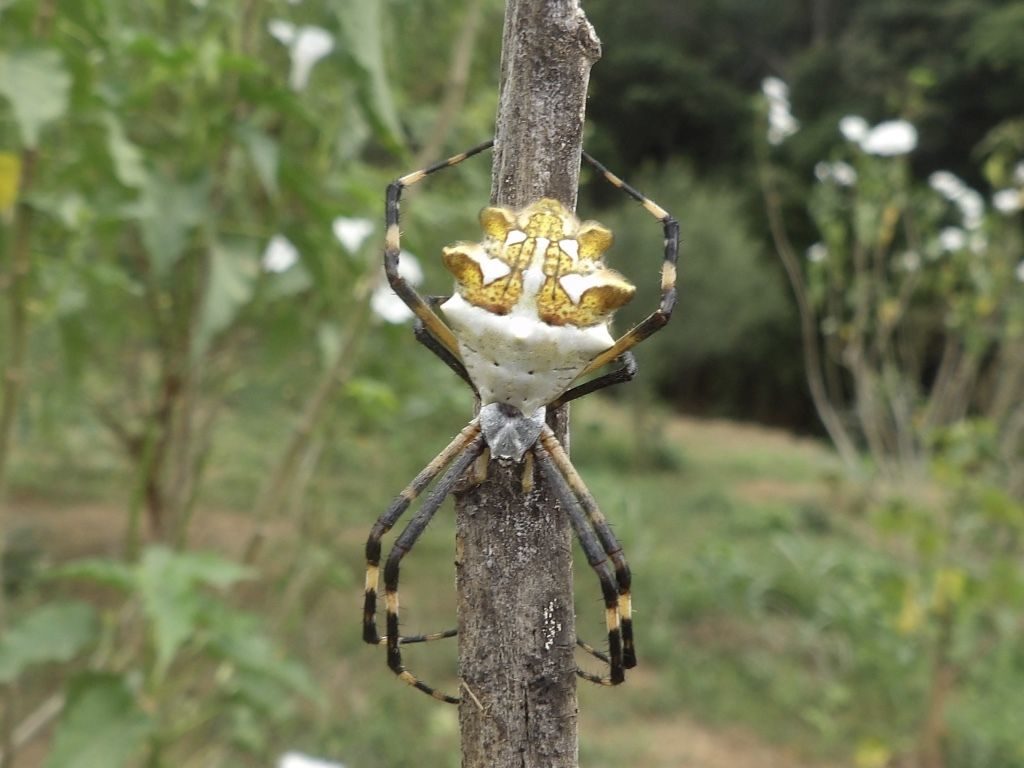 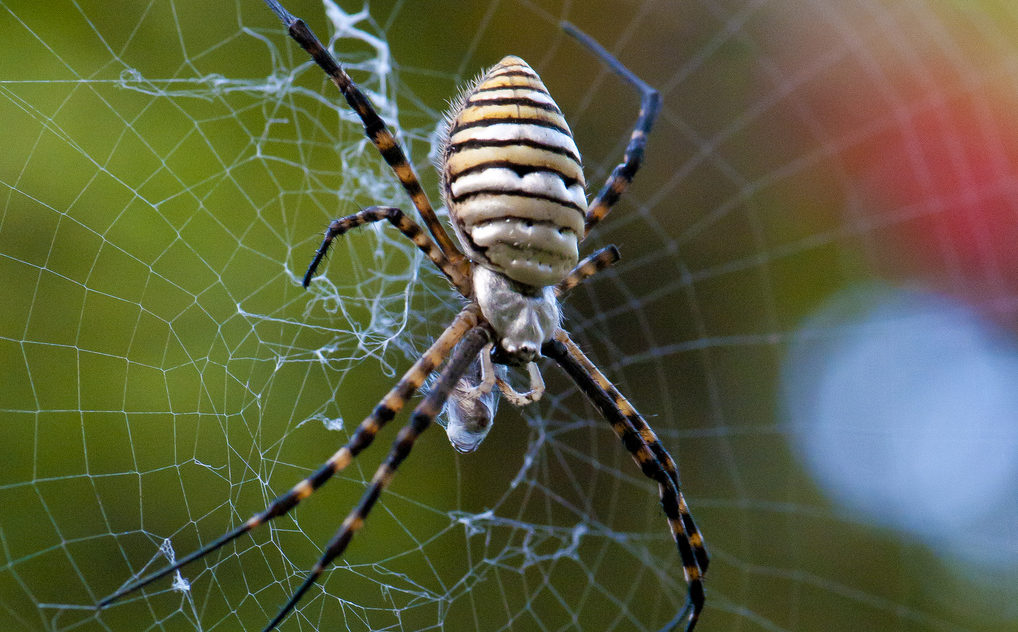 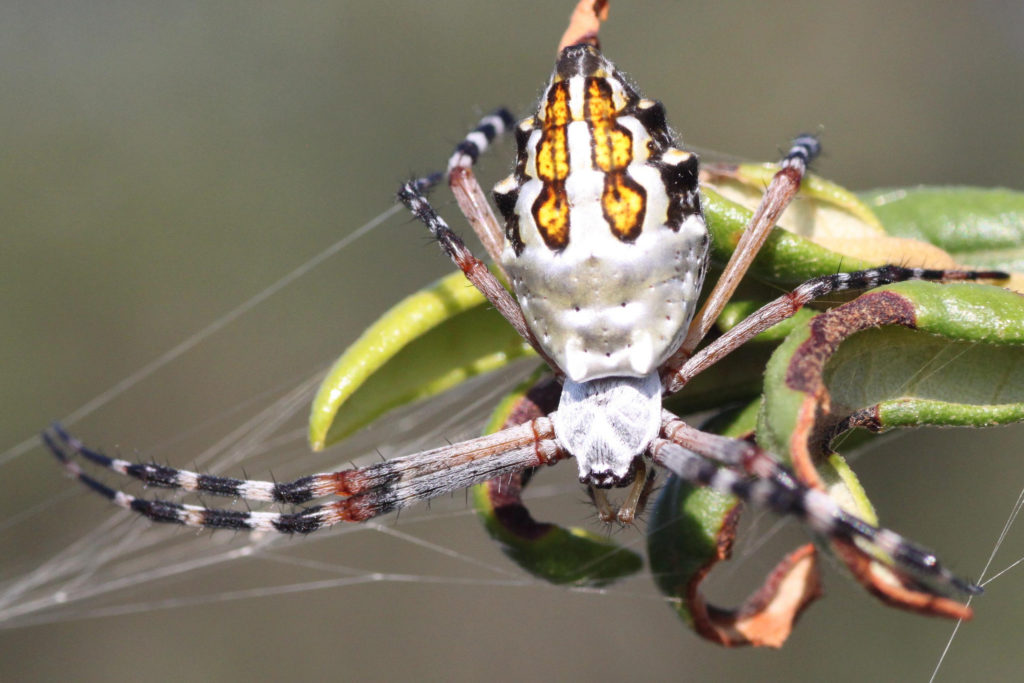