You are at: Home » Insects » Insects in your yard: mayflies

Mayflies are among the oldest winged insects in existence, dating from the Carboniferous Period, 354 to 298 million years ago. That seems sadly ironic since adult mayflies live only a day or two. In fact, the name of their scientific order, Ephemeroptera, is from the Greek ephemera for “lasting a day.” Mayflies spend almost all of their lives in water, in an immature stage. When they finally leave the water as adults, it’s to mate, deposit their eggs and die.

Mayflies are among the most important bottom-dwelling animals. First and foremost, as nymphs (an immature stage) in their water habitat, they’re food for fish and other aquatic animals. As adults on land, they’re a food source for birds and other animals. They’re important to humans, too, because they are freshwater species that are sensitive to pollution and their presence and diversity are indicators of water health.

If you live near water, especially a stream, they may visit your yard. Mayflies are found around the world, except the Arctic and Antarctic. There are about 630 species in North America and more than 2,000 species in the world.

Adult mayflies are easy to recognize. There are the vertical wings, of course, but there are other easy-to-spot characteristics, too. Like other insects, they have six legs, but their forelegs are distinctively long (extremely so with males) and slender. The abdomen is long and slender, too, and usually held noticeably curved upward, while the wings are held together vertically. The wings are large, triangle-shaped and transparent, with many veins and sometimes markings or mottling. The hind wings are tiny and rounded, or sometimes absent, depending on the species. The body is soft and quite delicate. Some are nearly transparent, with others being yellowish, orange, green or dark. Some mayflies have markings or dark bands on their body.

Adults range in size from 0.1-inch to 1.25 inches (2.5 to 32 mm) long, excluding the tails. The head is triangular and the antennae usually are short and thin. The eyes are large and compound. In females, they’re separated. The eyes of males meet in the middle and are particularly interesting because they’re split into a large upper lobe and a smaller lower lobe. Mayflies also have three very tiny simple eyes, called ocelli (oh-CELL-ee), which are used for detecting light. 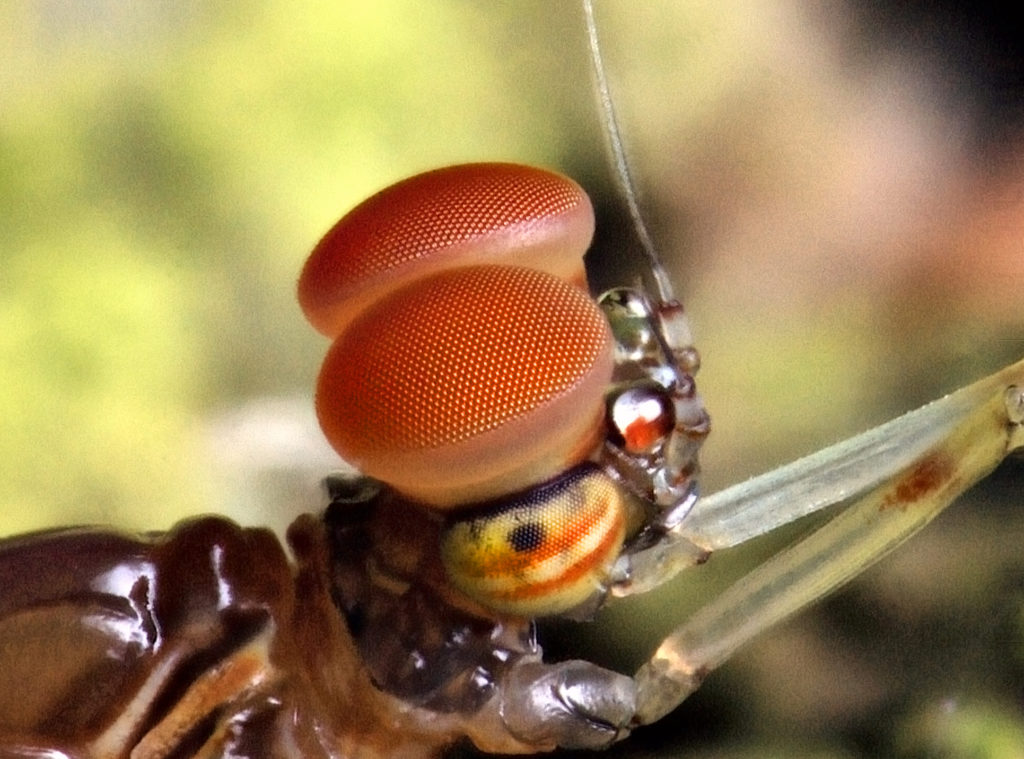 Mayfly male’s eyes as seen from the right side of his body. (Chris Fifield-Smith; Flickr; cc by-nc 2.0)

Mayflies are often seen with their forelegs extended forward and sometimes also angled upward. At the tip of the abdomen are, depending on the species, two or three threadlike tails, called caudal filaments. The tails are fragile and easily broken off, so sometimes a two-tail mayfly is really a three-tail that has met with an accident.

Mayflies spend most of their lives in a series of immature stages in water. Called nymphs or naiads, their body is elongated and either flattened or cylindrical. Coloration is usually a drab green or brown. They have a distinct head with compound eyes, chewing mouthparts and antennae. They molt several times as their body grows larger. Their wing pads can be seen on top of their thorax. Three pairs of legs extend from the thorax and the abdomen is usually tipped with tails. 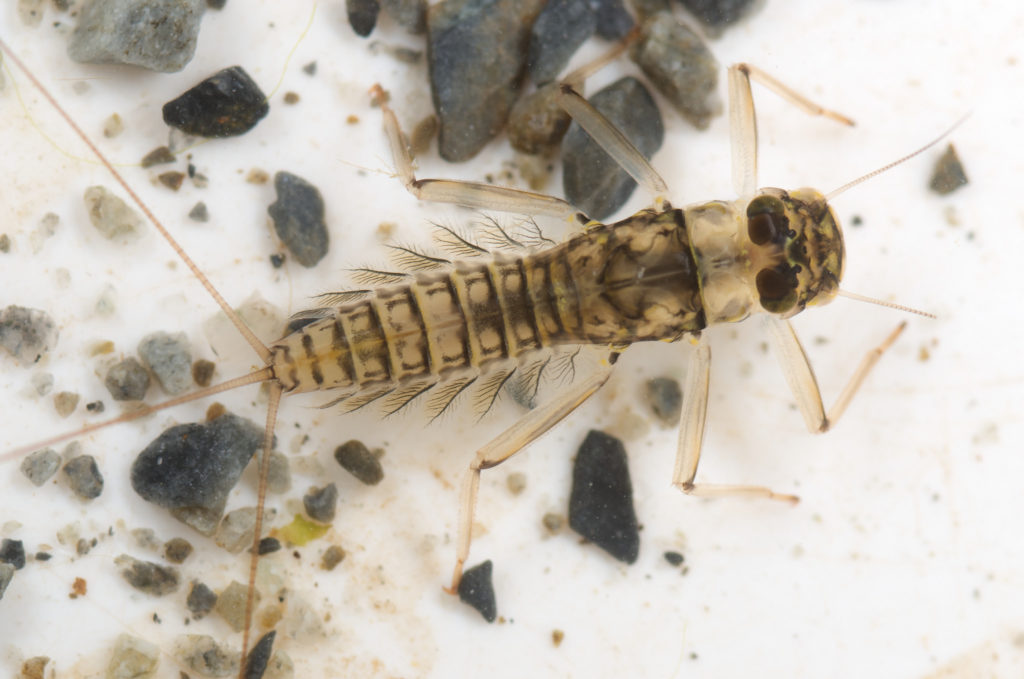 Nymphs breathe through a set of several gills located along each side of their abdomen. The gills are highly variable, being leaf-shaped, feathery, plate-like, sometimes even forked. They swim by wiggling their bodies and, with some species, feathery tails help move them along. Some species live in silt and mud on the bottom and others cling to rocks, plants or logs. Most feed on microscopic plant matter, but a few species are predators. Mayflies do all their eating as nymphs. As adults, they lack functioning mouthparts.

Mayflies are the only insects that have fully developed wings prior to reaching the adult, or imago (em-AH-go), stage. After many, many molts the nymph becomes nearly ready for flight. Now a pre-adult called a subimago, it swims to the surface and crawls out of the water. Breathing now through tiny openings in its exoskeleton, it finds a suitable spot and waits for its wings to dry. The wings are opaque and dull because there’s still one last layer to shed. The subimago can fly, if it must, but weakly. Within a day it will molt for the final time, revealing transparent wings that glisten in the sun. Soon the adult will lift itself into the air and begin its search for a mate.

Although called “May” flies, one species or another can be seen throughout the summer and fall. Most prefer a habitat with flowing water, such as a stream or spillway, but some species live in rivers and ponds, or even in still waters. Look for adults and subimagoes on vegetation along water’s edge. In the water, look for nymphs in the places they feed.

If one comes into your house, handle it carefully. You can slowly coax one onto your finger or a piece of paper and set it down outdoors. Mayflies are harmless, they don’t bite and they don’t have stingers.

Mayflies go through incomplete metamorphosis: They progress from an egg to a nymph to an adult.

Mayfly courtship usually begins with huge swarms of adult males dancing in the air above water. Females fly into the swarm, where males grab them at the base of their forewings (the reason for the males’ extra-long forelegs). Each twosome leaves the party. They may mate in flight or alight (some do both — they start out in mid-air, but end up falling to the ground or water still coupled.) In some areas, parts of Lake Erie, for example, swarming includes so many individuals some years that they become a nuisance and a hazard by flying into people, making roads and sidewalks slippery and splattering on windshields. 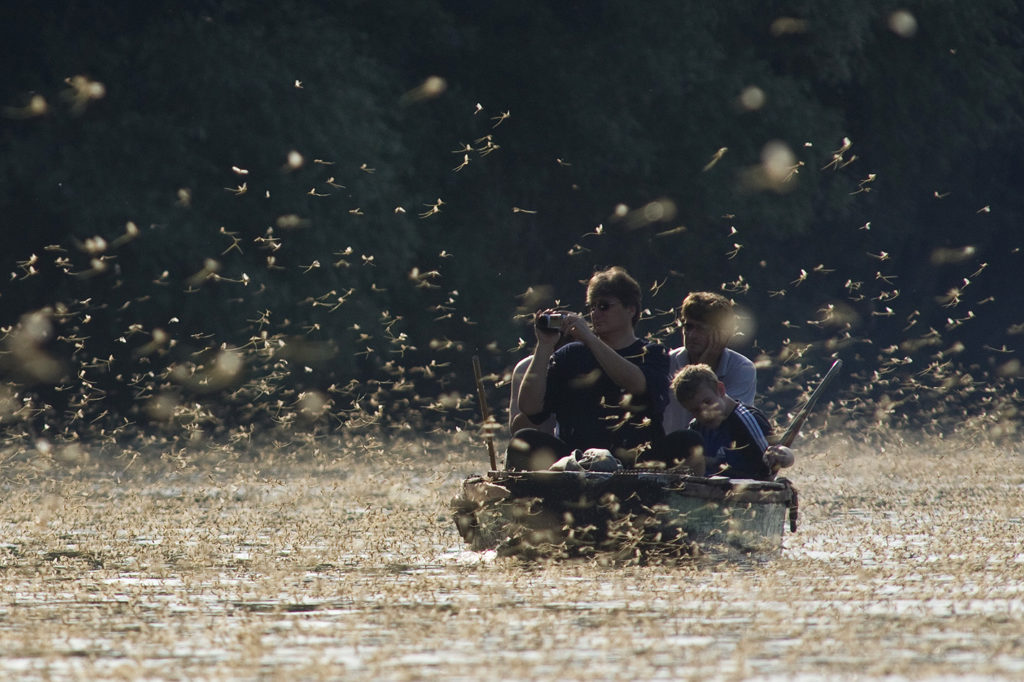 Females usually lay their eggs in low-light conditions, like at dusk or on an overcast day, on the surface of water either one-by-one, in small batches, or all at once. Some species go into the water to lay their eggs. A few species lay unfertilized eggs that hatch into more females, a process known as parthenogenesis. Eggs sink to the bottom and hatch there. Some nymphs will feed at that level and others will cling to the underside of rocks or on plants.

As with all other insects, a nymph’s “skin” is actually its skeleton (called an exoskeleton), worn on the outside of its body instead of within. As it eats and grows increasingly larger, the nymph must shed (molt) the inflexible exoskeleton each time it begins to outgrow it. Molting occurs 20 to 30 or more times over a period of three weeks up to three years, depending on the species, with one year being typical.

Most mayfly species have one or two generations a year. Mayflies might just as easily be called “dayflies,” because adults live only one day, maybe two.

Fish are the main predators of mayfly nymphs. Other aquatic life, such as dragonfly nymphs, leeches and crayfish feed on them, too. Adult mayflies are prey to carnivorous insects, spiders, birds and some mammals. Anglers use them for bait.

More reading:
In your yard: fireflies
Native plants for wildlife
About dragonflies and damselflies
Insects: an introduction