You are at: Home » Insects » In your yard: crickets

The sounds of fall wouldn’t be complete without the chirping of crickets. They go mostly unheard until late summer and fall, but, from then on their familiar chirps are everywhere. It’s mating season then and the chirps are from males calling out to females. They produce their sounds by rubbing their upper wings against their lower ones.

Female crickets can be easily identified by their long ovipositor (egg-laying organ), which projects from the rear of their abdomen. You’ll notice two shorter projections coming from there, too. They’re sensory organs called cerci, and both sexes have them. After mating, females deposit their eggs in the soil, where they’ll hatch in the spring. Young crickets look much like their parents, except they’re smaller and without wings. They molt several times over the summer as they grow to adult size. Their wings are fully developed by the time they’re adults.

Crickets are nocturnal and omnivorous. They feed on seeds, grains, flowers, leaves, small fruits, and some species eat meat, such as ladybugs and insect larvae. Their foraging causes no damage to speak of and they’re harmless to humans. They may bite in self-defense, but when they do, it rarely even breaks the skin.

All crickets are in the order Orthoptera, along with grasshoppers and locusts. You might be most familiar with those in the Gryllus family — field crickets: there are about 900 species around the world, except Antarctica. So-called “true crickets,” about 100 of them inhabit the US. You’ll read about some of them here. Also, about some “crickets” that aren’t really crickets.

House Crickets inhabit the eastern half of the US. Despite their name, they’re found predominantly outdoors. Like Field Crickets they’re attracted to light. They’re thought to be native to southeastern Asia.

Chirps of a House Cricket

This is another species of cricket you probably know very well by sound, even if you can’t give a name to it. And you might not ever see one because they blend into their environment very well. Their songs evoke summer through and through. Males begin singing at dusk from July into October. They can produce an amazingly loud sound and often synchronize into an even-louder chorus. There are 80 tree cricket species in the world — found everywhere, except Antarctica. 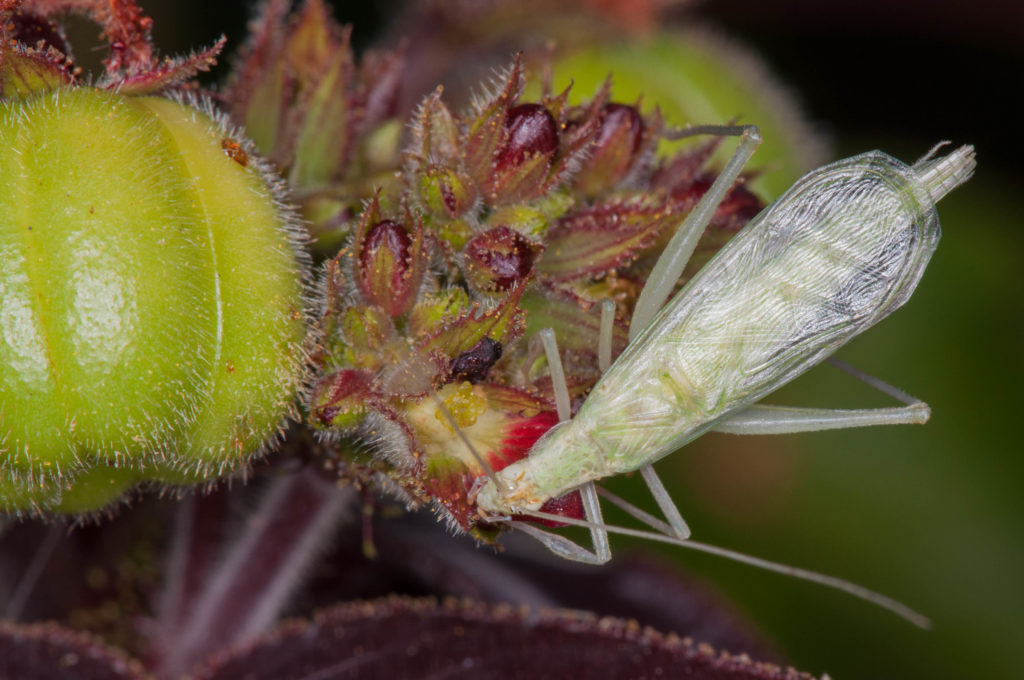 Despite their name, Camel Crickets aren’t crickets. They belong to the family Rhaphidophoridae and number about 1,100 species in the world. It’s a mystery how they do it, but they manage to somehow find their way into houses quite a lot. They seek out cool, damp, and dark areas, which is why they’re often found in basements. They get their name from their camel-like humped back. Unlike true crickets, they don’t produce sounds. 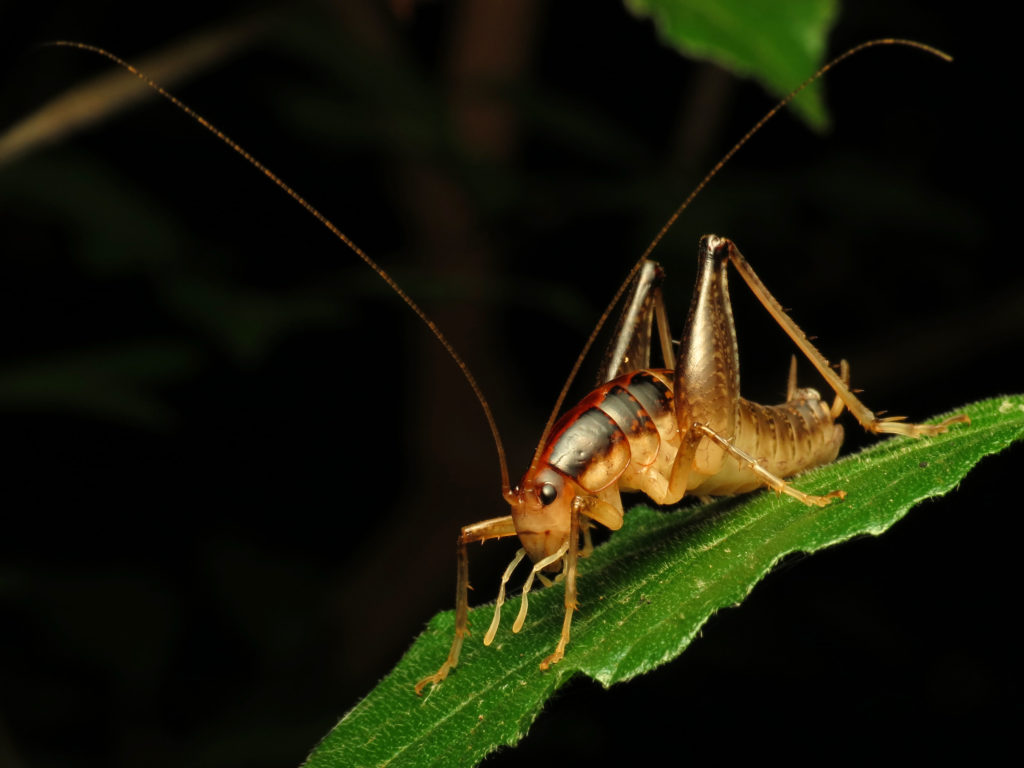 The Mormon Cricket (Anabrus simplex) is actually a shield-backed katydid. They’re in the order, Orthoptera, as crickets but belong to the family Tettigoniidae. Their name comes from their invasion of the first Mormon settlement in Utah in 1848.

There are 6,400 katydid species around the world, except Antarctica. Many are quite small in size, but some species grow up to 5.1 inches long (130 mm). Males produce their songs in the same fashion as field crickets and Snowy Tree Crickets, by rubbing their legs together (called stridulation). 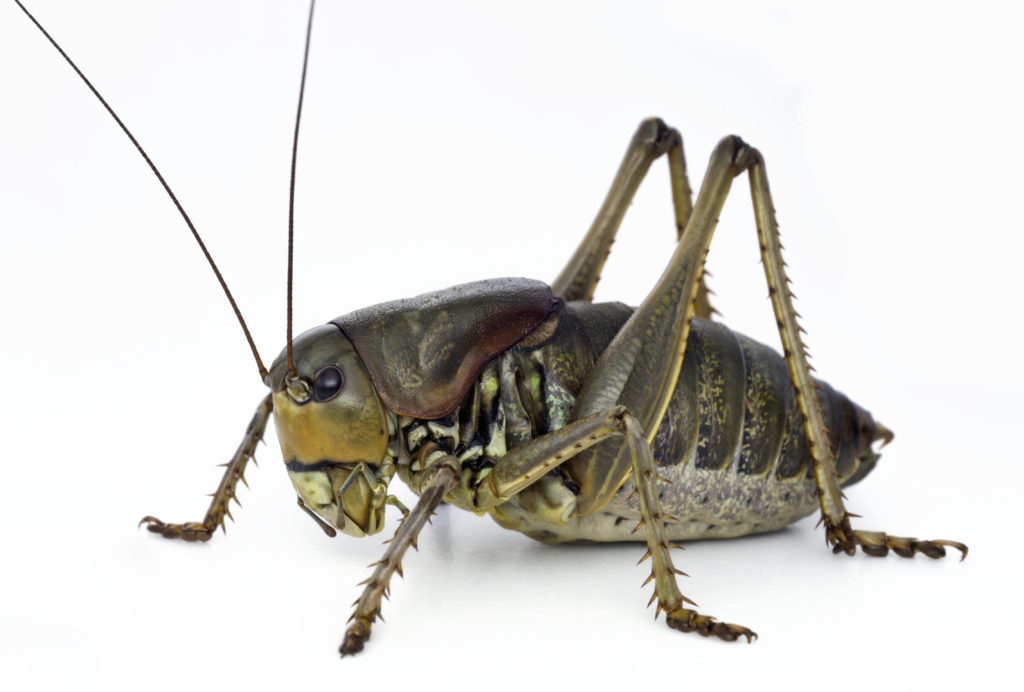 Listen to the buzzing sound of a Mormon Cricket

Another “cricket” with a misleading name, they’re neither crickets nor from Jerusalem. You may have also heard them called potato bugs. These flightless insects may emit a foul smell and can deliver a painful bite if threatened but are otherwise harmless. They’re in the family Stenopelmatidae. The origin of their name isn’t certain, but it may have originated from a mix of Navajo and Christian terms. There are 19 species and some grow quite large, up to 2.72 inches long (69 mm). Both males and females make a drumming sound by hitting the ground with their abdomens.