You are at: Home » Insects » All about earwigs, curious victims of a baseless myth

You may have heard that earwigs creep into the ears of sleeping people and burrow into their brains to lay eggs. Well, that’s just horrifying, and fortunately not true, or we’d be recommending earplugs here! That myth has been around since the Middle Ages when earwigs were first labored with that unfortunate name. Entomologist May Berenbaum,1 recipient of the 2014 National Medal of Science, examined about ten centuries of literature and found only one report of an earwig actually crawling into a human’s ear. To be sure, they can be startling to encounter because of their prominent pincers, but the truth is that earwigs are harmless to humans and you’ll be surprised at how interesting they are. They have intricately folding wings, pincers that a carpenter would admire, and, get this—they’re doting mothers! And, there’s more.

Earwigs belong to Dermaptera (der-MAP-ter-uh), a small order of about 2,000 species. “Dermaptera” comes from the Greek dermatos for skin and pteron for wing, a reference to their leathery forewings. “Earwig” is from the Old English ēare, which means “ear,” and wicga, which means “insect.”

The oldest earwig fossil is about 208 million years old, which takes it back to the Triassic Period, the age of dinosaurs. The earwigs of today can be found around the world, except Antarctica, but are most common in the tropics. About 23 species inhabit the United States.

The smallest species in the world is Eugerax peocilium, which is about 0.12 inches (3 mm) long, but most are around 0.4 to 0.8 inches (10–20 mm). The largest is the Australian Giant Earwig, Titanolabis colossea, which grows to an unnerving 2.0 inches (50 mm).[mfn]2 In 2014 an even larger species, the St. Helena Giant Earwig (Labidura herculeana), was declared extinct due to loss of habitat on its island home.[/mfn]

Earwigs cause minimal damage to plants and may even be beneficial as recyclers of decaying material and as predators.

Earwigs, like all other insects, have three body sections: head, thorax, and abdomen, and are covered by an exoskeleton that provides support and protection. Their body is long and somewhat flattened, which allows them to fit into tight spaces, which they prefer. Their colors run from light brown to black.

The brain mostly contains clusters of neurons that interpret sensory information coming to it, such as signals from eyes, taste, and smell receptors. It doesn’t play a large role in bodily functions; ganglia throughout the rest of the body primarily handle those.

Recent research indicates that insects have the capacity to be conscious, and they show egocentric behavior. Presumably, Julia Deiters, a researcher at Germany’s University of Duisburg-Essen, who has studied earwigs for years, would agree with that—she says they have some human-like traits and unique personalities.

The eyes are compound, meaning they’re made up of hundreds of individual lenses that transmit signals through neurons to the brain, which then interprets them. The mouthparts include a labrum and labium (upper and lower lips), maxillae (upper jaw), and mandibles (lower jaws).

The thorax is the middle section of the body. Attached to it are six legs (three to a side) and four wings (two per side). The legs are short to moderately long, depending on the species, and adapted for running. Earwigs aren’t good fliers, but they compensate by being fast on their feet.

Some earwigs lack wings, but most have them, and it’s their most interesting feature. Not the forewings, in particular, which are short, leathery, and modified into covers for the hind wings. That’s not to say they aren’t special in their way: Like the elytra of beetles, they aren’t used for flight; instead, they’re raised out of the path of the delicate, airworthy hind wings.

The hind wings are amazing. They’re shimmery, semi-circular, and kept so intricately folded under the forewings that when they unfold for flight, they expand to 10 times their size. The way they fold is unique: First, they fold lengthwise, like a fan, and then crosswise. Lastly, the earwig curls its abdomen and uses it pincers to tuck in a remaining little bit of exposed wing. The wings have stretchy joints that lock in place without any activation of muscles, whether they’re folded or unfolded.

The abdomen is the back section of the body and the largest. It’s cylindrical and long and consists of ten segments. Within it are the rearmost parts of the nervous, digestive, and circulatory systems, in addition to the excretory and reproductive systems. Also, the pincers that we find so alarming. Some species also have glands that can shoot a foul fluid up to 4 inches (10 cm) away as a method of defense.

The abdomen is filled with “blood” (in insects, called hemolymph), which is clear instead of red because it doesn’t contain iron. Another contrast is that the circulatory system doesn’t carry oxygen. Instead, earwigs breathe through a series of fourteen holes (spiracles) spaced along their abdomen, seven on each side (another six are in the thorax). A trachea connects to each spiracle and networks throughout the body to deliver oxygen to cells and collect carbon dioxide to be expelled.

Earwigs have two projections from the tip of their abdomen that are commonly known as pincers, and technically called cerci (SIR-sigh). They may be what you notice first about this insect because they’re pretty intimidating. Caliper-shaped and made of chitin (same as the exoskeleton), they’re used to help fold the hind wings, capture prey, and defend against predators. When showing aggression or alarm, earwigs bend their abdomen and hold the pincers over their head in a scorpion-like manner.

The female’s pair is straighter than a male’s, but for both sexes, they look dangerous, and you should take that as a warning! If an earwig is handled carelessly, it might pinch you (it’s painful, but not severe). Otherwise, these insects are harmless to humans. (There are other species with cerci, but only earwigs have heavy, caliper-shaped ones.) 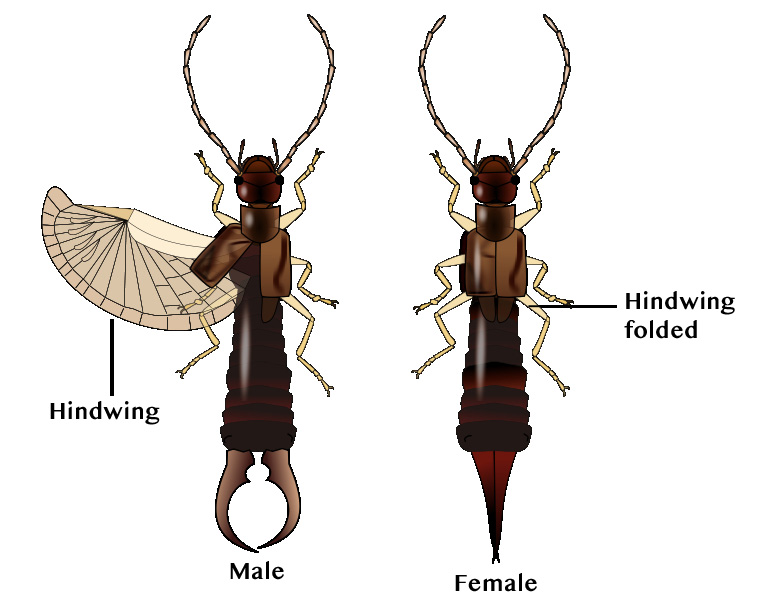 Males and females mate in the fall, then remain together in a nest located under debris, or in crevices or soil. Sometime in mid-winter to early spring the male takes his leave. The female then lays 50 to 80 eggs. Depending on the species, she has one or two broods each season. The young, called nymphs, hatch in about seven days and make their nutritious egg case their first meal. 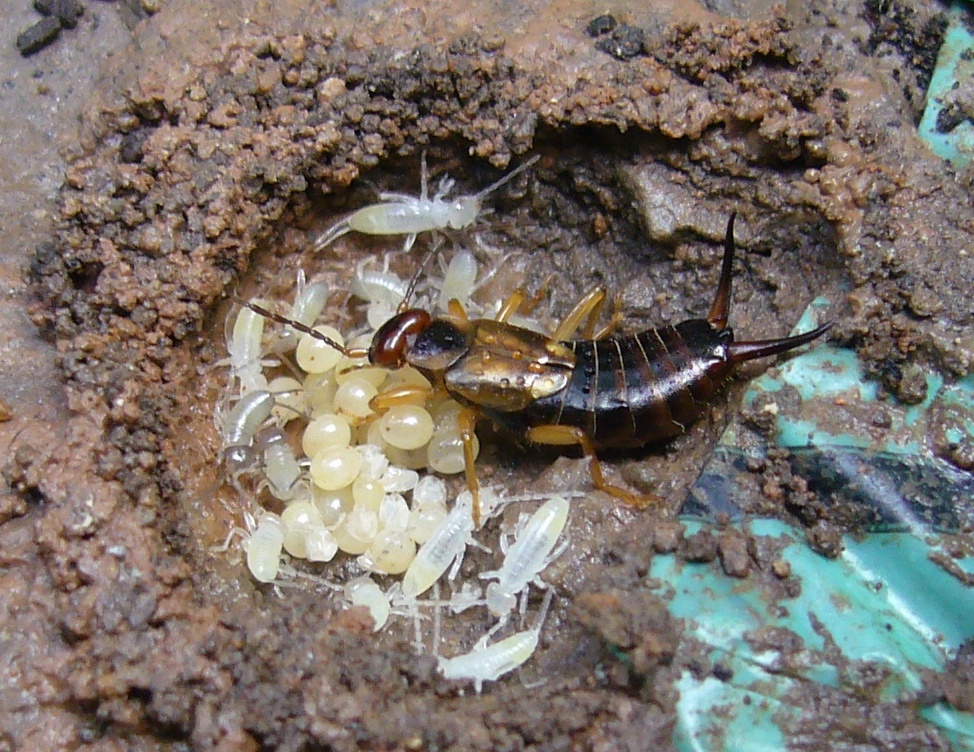 Now, here’s another impressive thing about earwigs: The mother takes care of her babies, highly unusual behavior in the world of nonsocial insects. If her eggs get dispersed, she rushes to save them and puts them back in the burrow. She keeps them free of parasites and fungi by licking them clean. After they hatch, she delivers food until they can take care of themselves.

The nymphs look something like adults, but they’re smaller, wingless,  and pale. They shed their outer skin (molt) four or five times as they eat and grow larger. With each molt, the wings get bigger and the antennae longer.

The amount of time the nymphs stay in the nest varies with the species, but they begin foraging on their own by the end of their second molt. They mature to winged, sexually mature adults in around 50 days. By that time, they also have their adult coloration. In an ironic, tragic twist to this story, after taking such tender care of her young, the mother is apt to eat those that overstay their welcome! Earwigs live for about a year from the time they hatch.

Earwigs are omnivorous. Most species feed on plant material—fungi, algae, mosses, pollen, flowers—or are scavengers on dead and dying vegetation. Some occasionally prey on small insects like aphids and mites.

Where to find earwigs

Unless you go looking for them, you may never see an earwig. Although they might come out in the daytime, they’re nocturnal insects and mostly hide out. They like dark, moist places, so to find them, look under stones, boards, mulch, dead leaves, logs, and flowerpots. You might also find them in rotting wood where some like to feed on the decomposing plant matter. At night look for them around lights or lighted windows.

An earwig might find its way into your house. That usually happens by accident, when they ride in as hitchhikers on cut flowers or other items. They can become indoor pests if they invade in large numbers during prolonged heat and drought when they seek moisture and a cooler environment. Earwigs need to eat, so your houseplants and food items will be on their menu. To eliminate them, just carefully sweep or pick them up and put them outside. Take care not to crush them as it releases an obnoxious odor—and don’t get pinched!

All about honeybees
True bugs: the good, the bad, the ugly
²SmithsonianMag.com