You are at: Home » Insects » About termites: mostly beneficial (yes, really!)

Would it surprise you to learn that termites play a vital role in the ecology of our planet? They’re best-known to us for their destructiveness when they take up residence in, well, a residence. No one wants that, of course, and worldwide they cause billions of dollars in damage annually, including a billion in the U.S. alone. They’re found nearly everywhere on earth, including the soil in our yards. Yet, that’s not a bad thing. You’ll learn why as you read on.

Termites are sometimes called “white ants” because they’re small, light in color, and live in colonies like ants do. They aren’t related, however. What they are related to is cockroaches, and they’re in the same order with them, called Blattodea. It’s believed that termites evolved from a cockroach-like ancestor. Fossil evidence dates termites back to the Cretaceous Period, from 145 to 66 million years ago when the last of the dinosaurs still lived.

Termites are in an infraorder called Isoptera (eye-SOP-ter-uh). Isoptera is from the Greek words iso and ptera for “equal wing,” a reference to their forewings and hind wings being roughly the same size. The word “termite” derives from the Latin and Late Latin word termes for “woodworm.”

So far, 2,900 species of termites have been discovered, and only 27 are guilty of chomping down on buildings. Termites are found nearly everywhere, except Antarctica, with most living in tropical and subtropical regions. In the U.S., they’re concentrated more in warm areas but are represented in all states, except Alaska. Forty-four species inhabit the U.S.

What’s the good of termites?

Termites love to chow down on plants, or rather cellulose, the main constituent of plants. Many prefer the cellulose in trees (the reason wood structures are appealing), while others like grasses or other plants. Cellulose is hard to break down (think of trying to chew up every last fiber of a celery stick!), but termites can do it. That’s important and part of what makes them not just sort of beneficial, but very much so. It all has to do with a complex process called nitrogen fixation.

Now, nitrogen is crucial to the formation of the amino acids, proteins, and DNA needed by plants and animals, including humans, to survive. The curious thing is that, while it makes up 78 percent of the air we breathe, it’s useless until it’s changed, or “fixed,” into usable organic compounds. Termites are responsible for much of the fixing that’s done because their guts contain specialized bacteria and protozoa. Plant material moves through their system, nitrogen gets fixed, some of it is used by their own bodies, and the rest is expelled in their feces. Their nitrogen-containing poo is churned into the soil for use by plants or is eaten by animals. Humans benefit because our diet includes plants and animals that eat plants.

Termites are beneficial in other ways, too. Some species dig nests in the soil, which aerates it, allowing oxygen, water, and nutrients to filter down to plant roots. Termites are food for other wildlife and, in some countries, humans eat them, too. And, finally, when termites die, their bodies provide nutrients to scavengers and the soil.

Termites have three body segments, like other insects, but their thorax and abdomen aren’t distinguishable from each other and appear to look like a single segment. Most range in size from 0.16 to 0.59 inches (4 to 15 mm) in length. But the world’s largest is mammoth-sized in comparison: imagine coming across the queen Macrotermes bellicosus, which measures around 4.2 inches (110 mm) long.

Soldier and worker termites of most species don’t have eyes and are wingless. Wings, when present, are longer than the body and at rest lay flat above the abdomen. Reproductive termites have two pairs of wings attached to the last two thoracic segments. Termites lack ears, but they can sense vibrations. Their sense of smell is excellent, and they communicate with each other by excreting pheromone-scented trails, and by touching and grooming each other. They also can sense other odors. They have no taste buds but can distinguish between types of wood. Termites have three pairs of legs, which are attached to the thorax.

Their abdomen contains the respiratory, circulatory, digestive, and reproductive systems. The digestive system contains symbiotic bacteria and protozoans mentioned above that can break down cellulose into digestible components.

Termites are called eusocial (social) insects. Like honeybees and eusocial ants, they live in structured colonies, and each member has a role to play. A colony may have many thousands, even millions, of related members. 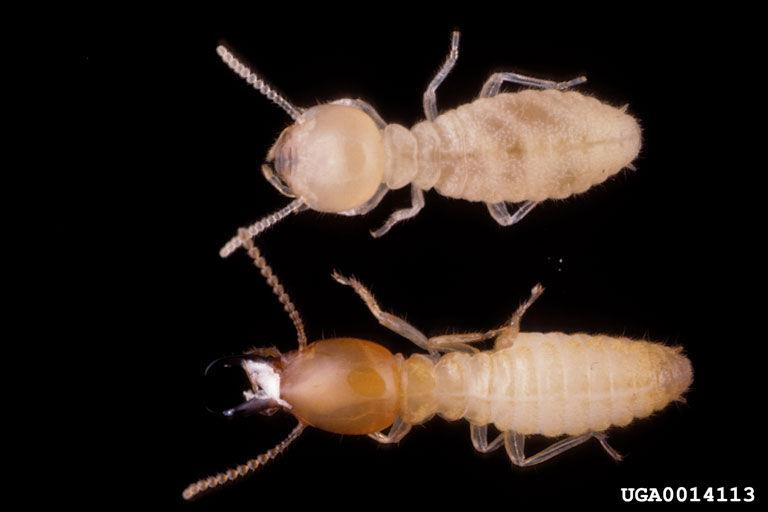 Colony members are differentiated physically and by role into one of several castes—queen, king, swarmers, soldiers, and workers. Some species don’t have workers; in their case, the work is performed by nymphs (immature termites).

Most termites are male and female “workers.” They’re whitish, maggot-like, wingless, and sterile. They live hidden within the nest. In most species, they have no eyes, but that doesn’t prevent them from performing as the “workhorses” of the colony. They must feed and groom all other castes and the termite young, repair nests, build shelter tubes, and even help defend the colony. Their eating creates tunnels and eventually riddles wood so thoroughly that a log may look solid on the outside but collapse under slight pressure.

“Soldiers” are the first line of defense against ants and other insects. Usually, they have a big head and large, powerful mandibles (jaws) that distinguish them from workers. They’re wingless, blind, and sexually immature. They fight predators with their heads and jaws; if the wall to their nest is broken through, some will rush to fill the hole with their heads—bravely facing death literally head-on. Researchers think they detect danger through touch and chemical means. 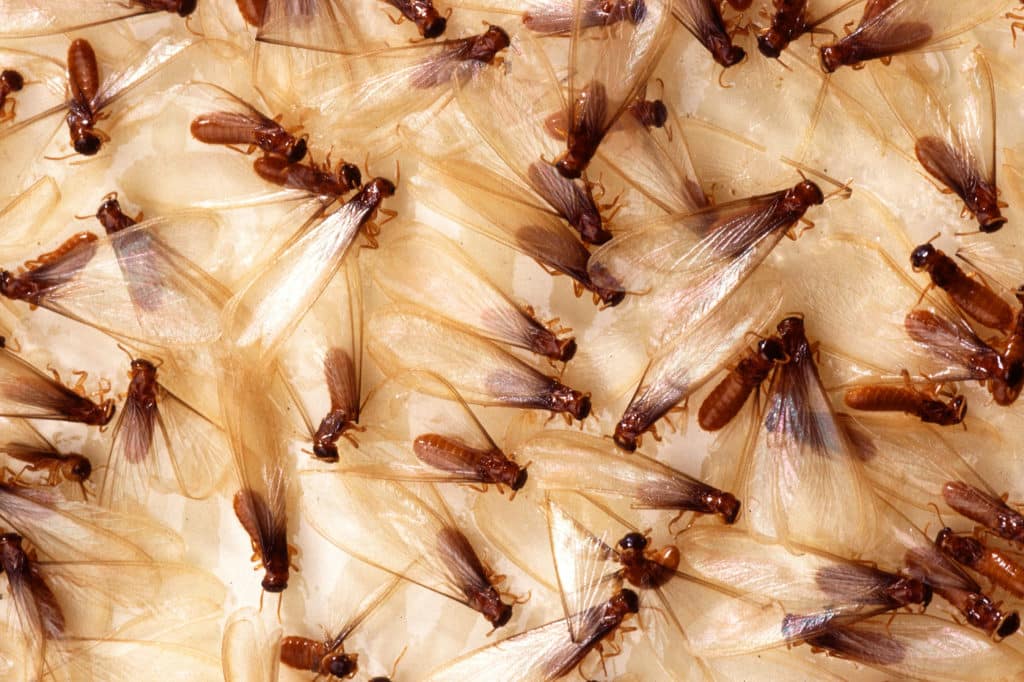 Swarmers are males and females with compound eyes, dark bodies, and two pairs of conspicuously veined wings of equal size. They become the queens and kings of new colonies. They can be confused with winged ants, but ants are much larger and have a skinny “waistline” and antennae with “elbows.” Also, the forewings of ants are much larger than the hind wings. Swarmers shed their wings after mating.

The queen is the colony’s most important member: she lays the eggs. The king has an essential role, too, as her mate, but she takes precedence. Both queen and king are darker in coloration than others in the colony and look much alike, except he is slightly smaller than she. The other castes tend to all their needs.

Termites undergo incomplete metamorphosis. That means they proceed from an egg to an immature stage (nymph) to an adult.

Nymphs look much like adults. The queen exists for the sole purpose of laying eggs—that’s all she does day after day! Most of her abdomen is filled with them. The king’s role is to keep the queen supplied with sperm. In a large colony, there may be more than one queen and king, with each pair living in their own area. 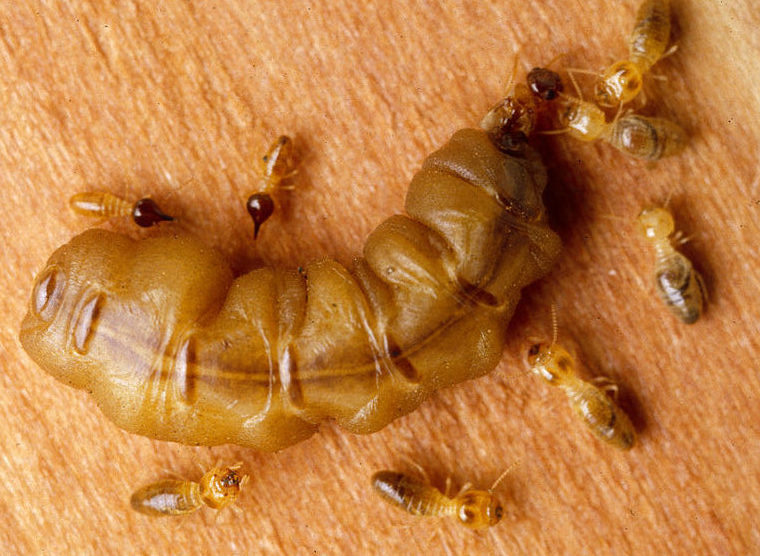 She once had wings! Queen termite, Nasutitermes exitiosus, filled with eggs and surrounded by workers and soldiers. (photo: CSIRO; cc by 3.0)

Those destined to become swarmers progress through several molts (shed their skin) during their nymphal stage and ultimately become sexually mature adults with functional wings.

Swarmers leave the nest to start new colonies. On a warm day, they’ll leave their colony and join thousands of swarmers of the same species from other colonies. As soon as a female accepts a mate, both insects shed their wings and together look for soft wood, where they begin excavating a tunnel. They’re now the queen and king of what will become a new colony. In a chamber they fashion at the end of the tunnel, they mate, and the queen lays a few eggs. She and the king care for them and their hatched young until there are enough workers to take over.

Studies have shown that some queens can reproduce both sexually and asexually. The asexually produced females have no genes in common with the king. They become “secondary queens,” mate with the king, and produce broods unrelated to the primary queen, which prevents inbreeding.

Workers and soldiers generally live one to two years, and the king and queen much longer—up to thirty years for her.

Termites feed on grasses, dead plants and trees, lichen, and even animal dung, depending on the species.

In the U.S. there are four kinds: Subterranean termites (family Rhinotermitidae) are the most destructive. Originally from China, they’re found in every state but Alaska. They live in huge underground colonies, sometimes several feet deep, and surface to feed mostly on dead stumps and fallen trees. But, unfortunately, they’ll move right into a house, including any tasty furniture there.

Dampwood termites (family Archotermopsidae) like moist dead or dying trees and logs on a forest floor. They’re most widespread in California and the Pacific Northwest and usually don’t invade structures.

Last are the Conehead termites (family Termitidae), named for their cone-shaped heads. An invasive species from the Caribbean, so far in the U.S. they’re found only in Florida. Authorities are trying to quickly eradicate them because they forage on the ground like ants and can quickly spread out and do extensive property damage. They feed on wood, plant litter, and dung.

Learn about another colony-forming insect:  All about honeybees

Insects in your yard: Hymenoptera
Butterfly species and their host plants
Explore an insect-friendly yard – 1   – 2   – 3