You are at: Home » Insects » All about cockroaches (most are beneficial and stay outdoors)

An old quote of unknown origin that dates back to the mid-1990s goes: “After a nuclear war, the only living things left will be cockroaches and Cher.” Well, we can’t say what the famous singer’s ultimate fate might be, but that may not be much of a stretch regarding cockroaches.

Cockroaches can withstand doses of radiation that would be lethal to humans. They can hold their breath for up to 45 minutes, deliberately slow their heart rate, go without food for a month, and live without their head for a week. They run at close to three miles-per-hour (5 km/h) and have such fast reflexes they can turn completely around in 1/25th (0.04) of a second.

And, get this: Scientists discovered that some species have surprisingly human traits: They’re very social. They recognize members of their own family, and many generations live together. They have egalitarian social structures based on rules and can make group decisions. Also, like some humans, their health fails if they have to live alone.

Okay, so it’s established that cockroaches are survivors, and probably smarter than a grub, but what does that matter, what good are they? Well, just like all other creatures on earth, they’re important in their own way: They’re a food source for birds, frogs, lizards, snakes, and mammals (even humans in some locales). And, they’re essential recyclers of decomposing plants and animals—what goes in their mouths comes out as enrichment for the soil. Out of 4,600 species in the world, only four are pests—the ones that come indoors.

Their appearance in a kitchen often has nothing to do with its state of cleanliness, despite that common belief; they’ve just inadvertently hitched a ride in boxes, firewood, furniture, and sometimes grocery bags. Or, they’ve wandered in through loose-fitting doors and windows during weather extremes.

Once in, loathe to leave

Once in, though, with so many comforts at hand, they’re loathe to leave. They can hide under furniture or appliances, or even sliver-sized spaces in baseboards, cabinets, and floors. Humidity, which most of them like, is to be found in or under sinks. Food is readily available, too—just a dropped speck of ham and a tiny breadcrumb can make an entire tasty sandwich for a little insect. In a kitchen, they’re living the good life!

Cockroaches belong to the order Blattodea (blah-TOAD-ee-uh), along with termites. Their name is the Spanish word for cockroach, Cucaracha (koo-kuh-RAH-chuh). Fossil evidence shows they’ve been around for 320 million years, since the Carboniferous Period. They live everywhere in the world, except the Polar Regions, although they’re mainly tropical. Whether they’re living indoors or out, they spend the daylight hours hiding in cracks and crevices or under yard debris. When they appear at night, we usually get just a glimpse as they scurry away when we flip on a porch light. They don’t really need a light to alert them to us, though—research in Finland has shown they can see in near-total darkness.

The largest cockroaches in the world are found in Mexico and countries farther south. Called Megaloblatta longipennis, they’re 3.8 inches long (9.7 cm) and have a wingspan of 7.9 inches (20 cm). (Imagine coming across one of those!) The smallest are in the genus Supella, and measure about 0.4–0.6 inches long (10–14 mm). About 50 species, ranging in size from 0.5 to 2.0 inches (1.2–5.1 cm), inhabit the US. The most common and most likely to live indoors is the German Cockroach, Blattella germanica. Runner-up is the Brown-banded, Supella longipalpa. Two other, somewhat less-common, invaders are the American, Periplaneta americana, and Oriental, Blatta orientalis.

Cockroaches have three body sections: head, thorax, and abdomen. They have a flattened, long-oval body that looks pretty much like the oldest discovered cockroach fossils. The body is covered by a hard skeleton (exoskeleton), and they’re reddish-brown, sometimes black. They have three pairs of legs with claws, and usually two pairs of wings.

The head, small, oval, flattened, and downward bent, is often hidden from view when the insect is observed from above. A flexible neck allows the head to move in all directions. The cockroach has a brain with 1,000,000 brain cells—that’s more than a honeybee’s. And there are two large, apostrophe-shaped, compound eyes, chewing mouthparts, and two antennae. A plate behind the head, called the pronotum, has markings that help to distinguish species from one another.

German Cockroach, Blattella germanica, the most common in the United States. (© Protasov AN / Shutterstock)

The compound eyes are composed of 2,000 individual lenses, called ommatidium, each of which sees its own tiny portion of an entire picture, which the brain assembles and interprets. The antennae are long, thready-looking, used for detection of food, and as feelers—when a cockroach walks alongside a wall, for instance, it will keep an antenna in contact with it.

The thorax is the middle section. Attached to it are the legs and wings.

Most male cockroaches have wings, but rarely use them. Those that do fly only go for short distances, and even then mostly use them for gliding from a higher to a lower level. The forewings are leathery and meant to shield the delicate, membraneous hind wings. Females often lack wings altogether or have vestigial ones, which are small and undeveloped.

Cockroaches’ legs are strong, the back ones especially—they can propel the insect fifty body lengths per second. Their legs have spines and their feet have sharp claws that can cling to the tiniest imperfections in a surface, making it easy for cockroaches to scale walls and cross ceilings.

The abdomen is the largest part of the cockroach’s body, and it holds the internal organs associated with circulation, digestion, respiration, reproduction, and elimination of body waste.

The heart is long and tube-shaped. Unlike that of a human, the blood is clear because it doesn’t contain iron to give it a red color. Called hemolymph, it doesn’t carry oxygen; its job is to transport nutrients throughout the body.

Cockroaches breathe in and out through ten pairs of slit-like openings, controlled by valves, located along both sides of their body—eight pairs along the abdomen and two pairs in the thorax. They’re called spiracles, and each attaches to a trachea that networks through the body.

They have a simple digestive system that’s modified with a crop and proventriculus to hold and pulverize the tough cellulose and other materials cockroaches include in their diet. Two conspicuous appendages at the end of the abdomen, called cerci, function as sensory organs for detecting air movement; they alert the cockroach to approaching danger.

The breeding season runs from March to September. A female mates only once and will hold enough sperm to produce fifteen to forty ootheca (oath-EE-kuh) in her lifetime. What’s an ootheca? It’s an egg case that forms around the fertilized eggs in her body. It holds twelve to twenty-five eggs and is made up of proteins that become hardened to protect the contents. In about a day, it’s ready to go, but the female doesn’t release it—she carries it for several more days, with it sticking out the end of her body! After that, she drops it in a dark crevice or buries it in debris or soil. Some species, like the American Cockroach, carry an ootheca until the eggs are just about ready to hatch.

There are some interesting exceptions: A few give birth to live young; the Madagascar Hissing Cockroach, Gromphadorhina portentosa, is an example, and some small colonies of American Cockroaches are parthenogenetic—they’re females who give birth only to females; no males exist. 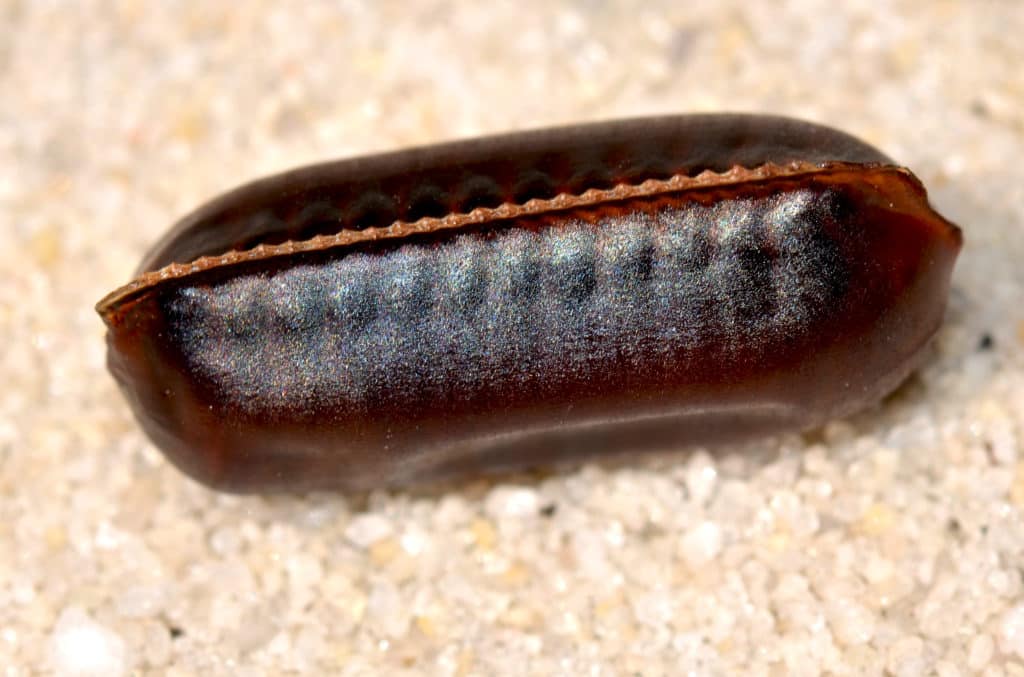 Eggs hatch in six to eight weeks. The nymphs look like tiny, wingless versions of their parents. They’re paler at first, but darken as they develop. They’ll molt from ten to thirteen times as they grow. At the time of their final molt, they’re fully developed adults. Depending on the species, this growth period can take up to a year or more. A full lifespan is up to three years.

Differences between male and female

Here are some of the more obvious differences between a male and a female.

Most cockroaches like it dark, damp, and warm. They’re nocturnal animals and hide in groups during the day under mulch, bark, rotting logs, stones, or in storm drains, basements, and buildings.

Cockroaches are omnivorous scavengers. They eat nearly anything, including all kinds of human food, pet food, garbage, grease, paper, wood, leather, and even wallpaper paste.

All about termites
Cockroach species information and identification guide