Cicadas, leafhoppers, aphids, planthoppers, shield bugs, assassin bugs, water bugs—these are some of the “true bugs” that inhabit your yard.1 You may not be able to give them a name on sight, or even spot them without looking closely, but they’re all around.

Some of them are doing excellent work for you by eating pest insects and helping to pollinate as they move about your plants. Others can enchant, as cicadas do with their rhythmic summer songs. Water striders are simply fun to watch while begging the question, “How do they manage to skate on a pond’s liquid surface?”

But, then, there are the others—critters that can smell up the house, or leave your once-beautiful plants desiccated and just plain dead. And, watch out, because some will deliver a painful stab! Many are so ugly and frightening in appearance, you’d scream and flee if they somehow grew a foot taller.

So, it’s a mixed group, this lot, but interesting to read about, as you’ll see. 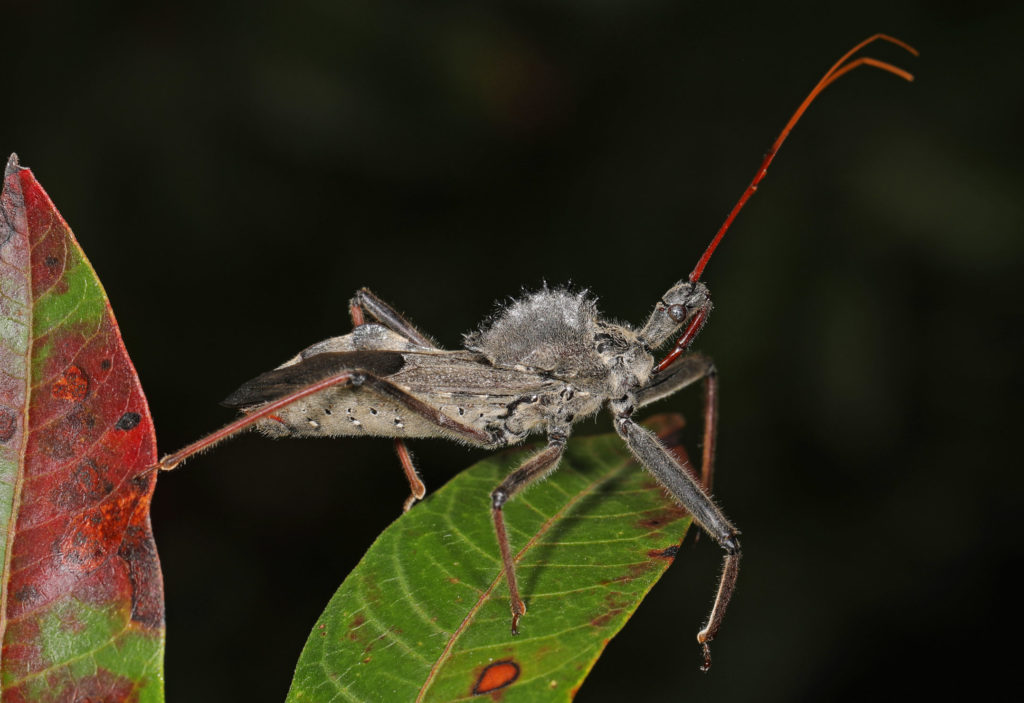 Wheel Bug, Arilus cristatus, a predator of other insects. You don’t want to get stabbed by the red “beak” you see folded under its head. Very painful! (John Flannery / Flickr; CC BY-SA 2.0)

Only true bugs are truly ‘bugs’

To entomologists, true bugs are the only insects that warrant the term “bug.” All others are insects, but not bugs. That can be especially confusing because lots of insects have the word bug in their common name. Ladybugs and lightning bugs, for example, are beetles and not true bugs. It gets worse: Many true bugs, such as aphids, are bugs without the word “bug” in their name.

So, all bugs are insects, but not all insects are bugs, and we can’t always rely on their names to give us a clue. Entomologists do love to have their fun!

So, what lies behind this distinction? It’s because true bugs are classified separately based on their mouthparts, which are adapted for piercing and sucking, unlike most other insects. Of course, in common parlance, many of us will go on calling most insects “bugs.” 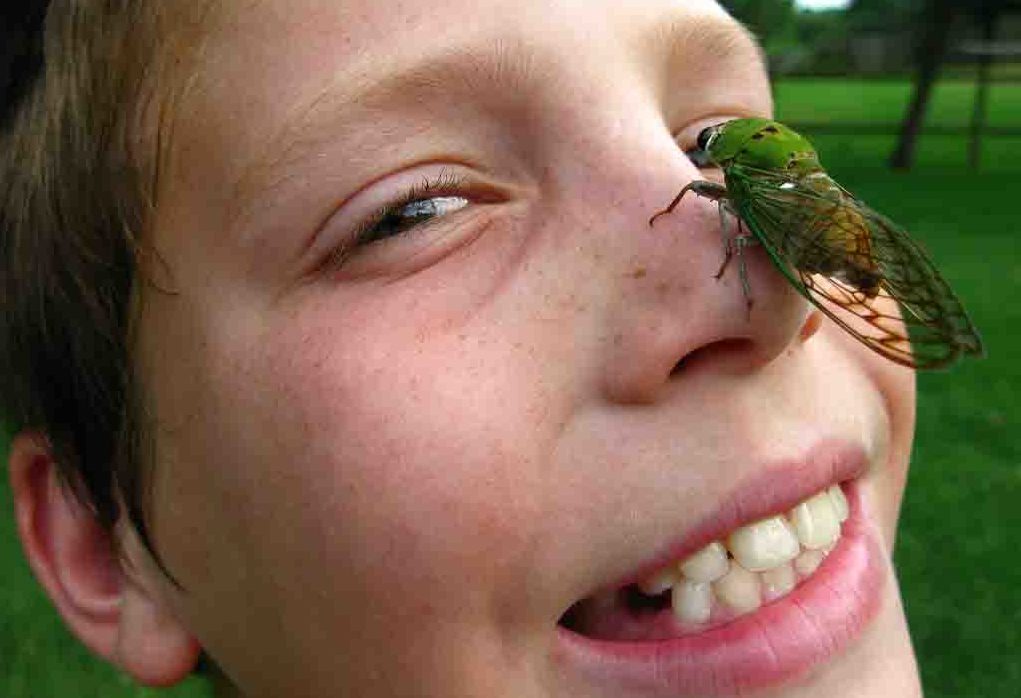 Cicadas are true bugs, and they don’t bite or sting. (OakleyOriginals / Flickr; cc by 2.0)

Fossil evidence dates true bugs back to the Carboniferous Period, from 358.9 million to 298.9 million years ago when land animals were becoming more diverse. Their order, Hemiptera, is large, with around 82,000 species scattered among four suborders. About 10,200 inhabit North America. The name Hemiptera (hem-IP-ter-uh) is from the Greek words hemi, for half, and ptera, meaning wing. “Half-wing” refers to the forewings of many of these insects, which are thick on the half that attaches to the body, while the outer half is membranous.

Hemiptera consists of plant feeders, predators, and parasitic species. Most are terrestrial, but some, like giant water bugs, are aquatic or semi-aquatic. Herbivorous true bugs, such as aphids, can be destructive, but most others are not, and the predator species are particularly beneficial. 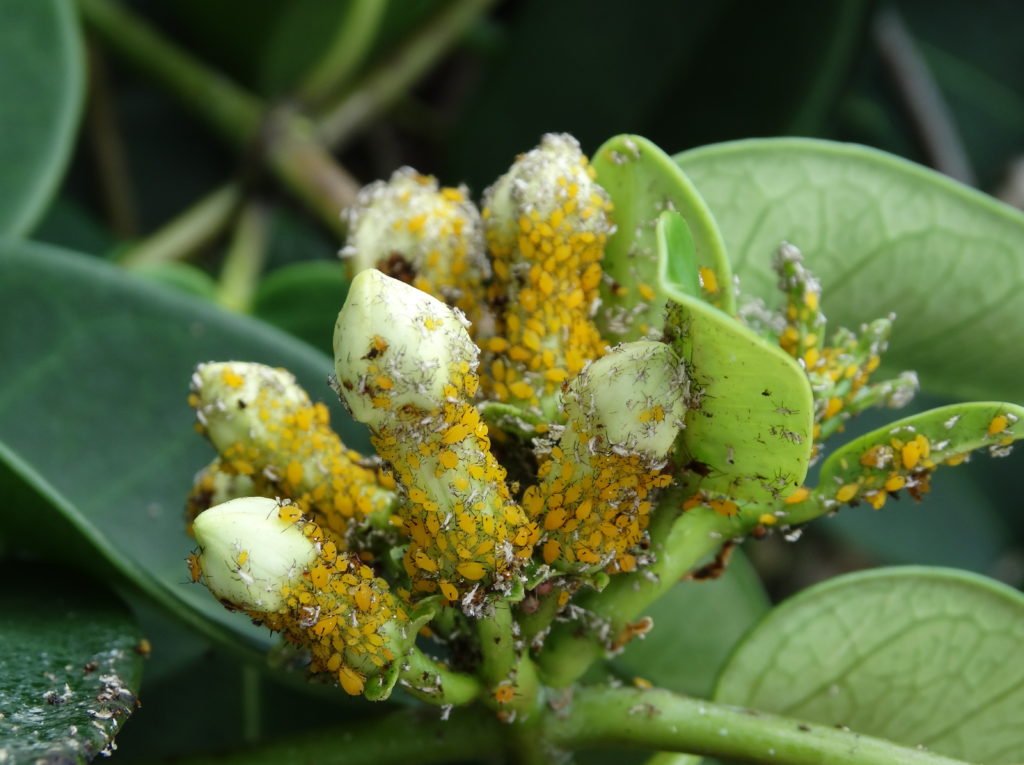 True bugs have three body sections, like all other insects: head, thorax, and abdomen.

Body sizes range from 0.06 inches (1.5 mm)—those in the Family Anthocoridae—up to 4.7 inches (12 cm)water bugs in the genus Lethocerus. Appearance is highly variable, too, but true bugs are often either oval and flattened on top or elongate and round, like a cylinder. Their colors may range from dark-brown to beautiful patterns of bright red, green, blue, and yellow. Many have camouflage colors, with patterns. 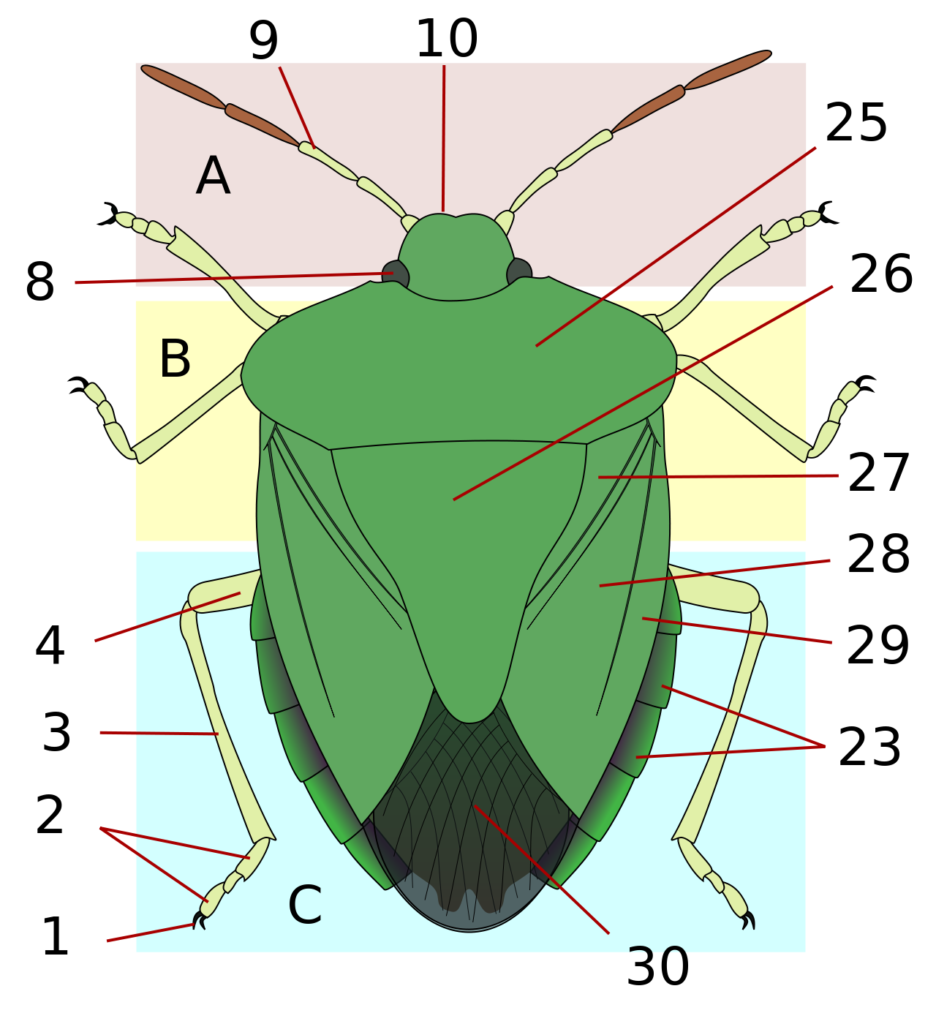 All true bugs have a small, mobile head with two well-developed compound eyes spread far apart. Some species also have up to three light-sensing organs called ocelli (oh-CELL-ee). The brain is essentially a command center. Filled with neurons and a long nerve cord, it receives sensory input, interprets it, and issues orders. 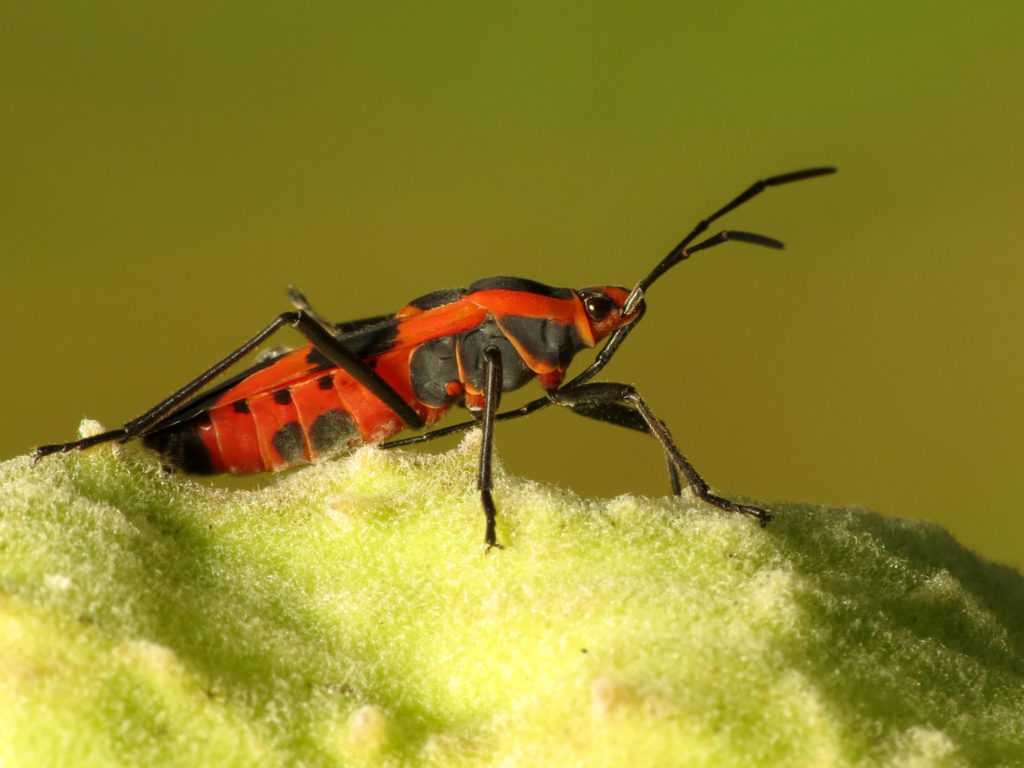 The mouthparts include mandibles and maxillae (jaws) that are modified into a “stylet.” The stylet is a long, pointed tube that’s hidden within what’s essentially a proboscis (although in this case called a rostrum or beak). With herbivorous species, it’s used to pierce plant tissues and suck up the juices. Predators use theirs to stab prey, inject digestive enzymes, and suck their body fluids. The rostrum is hinged so that it can be folded under the body when not in use.

True bugs also two antennae. They’re usually slender and may be long, or, as with many of the aquatic species, short. 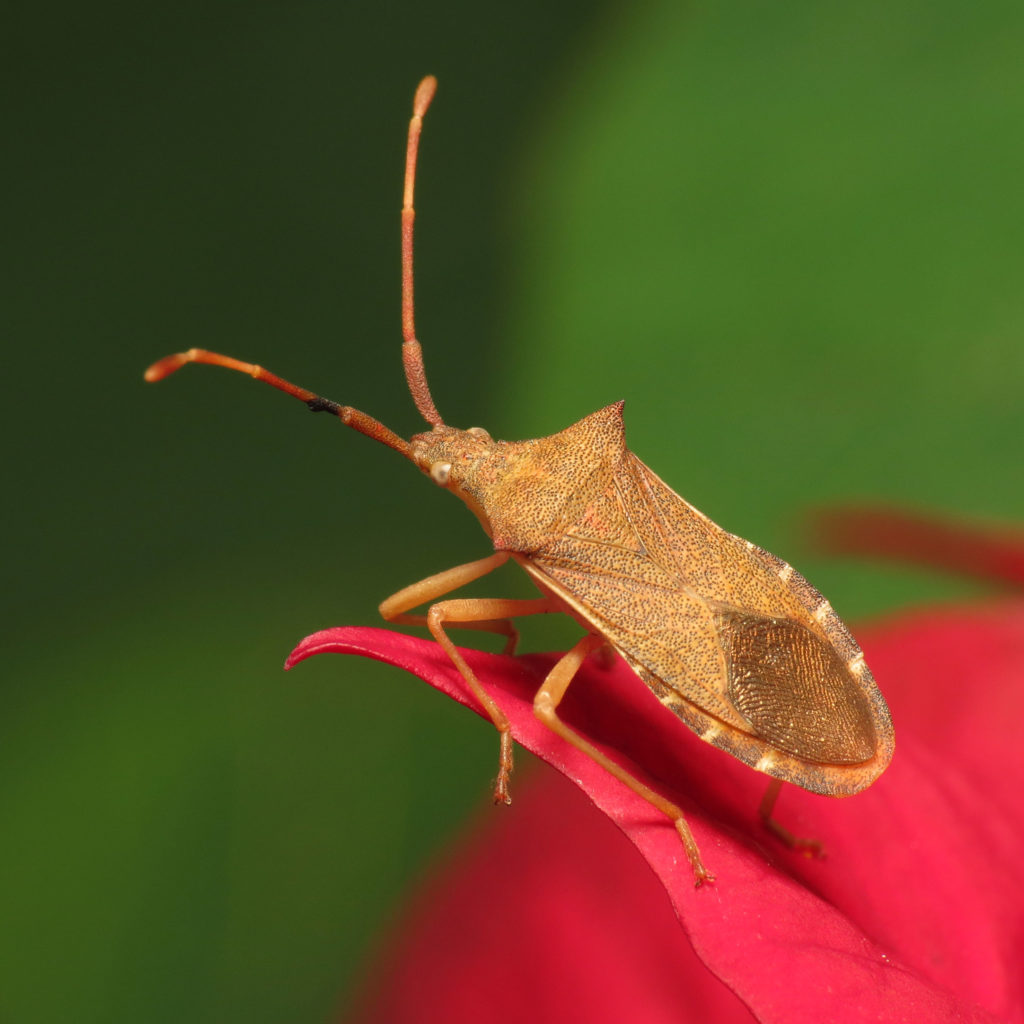 Squash Bug, Gonocerus acuteanagulatus, a plant pest that gives off a foul odor if squashed.  (Katja Schulz; Flickr; cc by 2.0)

The thorax is the middle section of the body. Two pairs of wings and three pairs of legs are attached, so this part of the body is all about motion (except for a few wingless species). The thorax has a conspicuous shield-shaped area called a scutellum (skew-TELL-um) on the top.

True bugs are able fliers but usually go only short distances. The wings of some are membranous and totally clear, or mostly so, with both pairs used for flight. For others, though, the front part of each forewing is tough and leathery, like that of a beetle’s elytra2, and the back part is membranous (hemielytra). With these species, only the hind wings are used for flight; the forewings just move out of the way. (A few, such as scale insects [Suborder Sternorrhyncha], may lack wings, altogether.)

Many species hold their wings together in a tent-like fashion over their back. But others lay them flat on top with the ends overlapping, which sometimes produces the visual effect of creating another rounded triangle at the end of the abdomen. When you spot these indicators, you’ll know you’re looking at a true bug.

The legs are long and segmented, with two claws at the end. Cicadas, leafhoppers, treehoppers, planthoppers, froghoppers, and others in the Suborder Auchenorrhyncha, have powerful legs that are adapted for jumping. The Guinness World Records3 reports a froghopper, Philaenus spumarius, that jumped 28 inches (70 cm) at an acceleration rate of 13,000 feet (4,000 m) per second and a G-force of more than 414 times its body weight. That’s approximately equivalent to a 6.0-foot man jumping 600 feet in one single bound!

The abdomen is the back section of the body and the largest. Within it are the rearmost parts of the nervous, digestive, and circulatory systems, in addition to the excretory and reproductive systems.

The entire cavity is filled with clear “blood” (called hemolymph) that doesn’t carry oxygen. Instead, true bugs breathe through a series of respiratory openings called spiracles. Most of the terrestrial species have ten pairs split between both sides of the body (eight pairs for the abdomen, two pairs in the thorax). Attached to each of these is a tube-like trachea that networks throughout the body to passively deliver oxygen to cells and collect carbon dioxide to be expelled.

Instead of a heart, these insects have a pumping organ called the dorsal vessel, and there are no blood vessels. In what’s known as an open circulatory system, blood pumps from the dorsal vessel to the insect’s head and then freely floods back through the body, bathing all the organs in nutrients and taking up waste along the way.

The digestive system is essentially a long tube that stretches from the mouth to the rectum. It consists of several sections (guts), including a stomach. Nutrients are extracted from food and passed through semi-permeable membranes into the blood-filled body cavity.    More about insect anatomy

Many true bugs use sound to communicate. Probably most people have heard the loud mating calls of male cicadas (the loudest sounds made by any insect), even if they don’t know the source. The calls are produced by two tymbal organs, which are alternating flexible and stiff membranes that lie side-by-side on the underside of the body. When they’re repeatedly clicked in and out, they make a sound. Wikimedia compares it to that of a popping metal lid of a jam jar as it’s pushed in and out.

Another form of sound-making is through stridulation—the rubbing together of body parts. Some aquatic species rub a comb-like structure located on their tibia against their abdomen. The male water boatman, Micronecta scholtzi, only 0.09 inches long (2.3 mm), uses a drumstick of sorts, because he uses his penis (aedeagus) on the organs. This minuscule insect’s call, which is produced underwater, can reach 100 decibels (that of a motorcycle), and be heard by humans on land! Assassin Bugs (Family Reduviidae), strictly terrestrial, rasp their beak against the underside of their body to produce hissing sounds.

Males and females use various means to find each other, including sex pheromones, mating calls, and vibratory signals through plants the insects are on.

Females lay their eggs on or in plants, in the ground near a host plant, or in or above water, depending on the species. Some shield bug females lay masses of eggs on the underside of leaves or plant stems, and then guard them until their offspring (nymphs) leave after hatching. Female giant water bugs lay their eggs on the father’s back. Some aphids are parthenogenetic—they can produce young from unfertilized eggs. 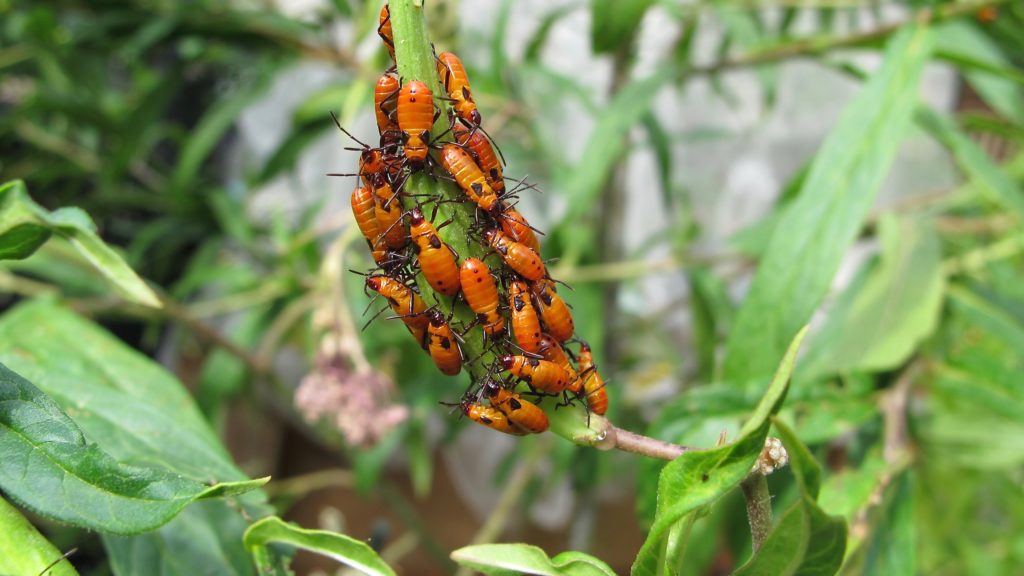 Eggs hatch in about four weeks. The young act like their parents and loosely resemble them, although their coloring may be different, and they’re smaller and wingless. Because their hard exoskeleton won’t stretch as the nymphs grow, they must break out of their skin (molt) several times to accomodate their growing bodies. With the final molt, they’re adult-size, with fully developed wings and mature sex organs. From egg to adult takes four to five weeks. Their life cycle is relatively long, as insects go, with many species living a year. Most true bugs overwinter as adults.   More about the life cycle of insects

True bugs can be found in almost any habitat, including water (particularly slow-moving or still). They’re most diverse where there’s moisture and lots of plants. Most are plant feeders, so look for them there. Predator species can be found on plants, too, as they look for other insects or their eggs and larvae to feed on. Look for water striders and giant water bugs on the surface of water. In winter, look under boards, logs, and the like, where they hibernate.

True bugs are prey for fish, amphibians, birds, other insects, spiders, small mammals, and other carnivorous animals. They defend themselves by running away, hiding, and releasing irritants and noxious odors.