You are at: Home » Plants » Native flowering plants for pollinators, birds

These plants and vines will provide food for bees, butterflies, hummingbirds, and other pollinators. 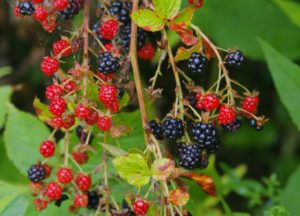 ALLEGHENY BLACKBERRY, Rubus allegheniensis, is a bush with high wildlife value: nectar for honeybees and berries for songbirds and animals large and small. You’ll enjoy the berries, too. Native to eastern NA, the West Coast, and some areas of the Midwest. Grows 3–6 ft. tall and 6–12 ft. wide. Its branches have thorns, so plant where that won’t be a problem. Can be grown from seed or cuttings, but seeds may be the only way to find it (available on Amazon) or take a cutting from a wild plant (with the property owner’s permission, of course). Tolerates all light levels and soil types; dry to moist. Zones 2–8. 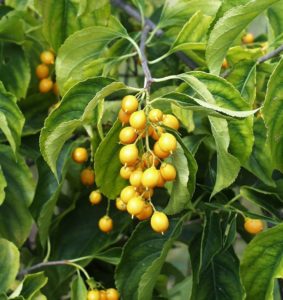 AMERICAN BITTERSWEET, Celastrus scandens, is a perennial vine that blooms in mid-summer. Native to central and eastern NA. Likes shade and rich, well-drained soil. Woody, thick stems grow about 30 ft. long and can strangle saplings, so keep it away from young trees. Its fruit is poisonous to humans. Why bother to plant it? Because its small, orangish fruit is loved by birds. It’s also pretty. Take care not to buy the VERY invasive and destructive Oriental Bittersweet, Celastrus orbiculatus, introduced from Asia. Zones 4–8. 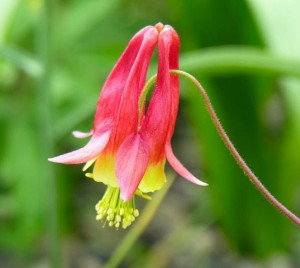 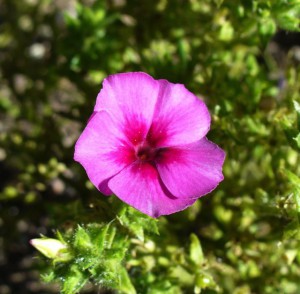 ANNUAL PHLOX, Phlox drummondii, native to Texas and the southeastern US, is a good plant for gardeners who like surprises and don’t mind a bit of disorder. Rake seeds into loose soil in the spring. They germinate early, grow to about 12 in. tall, bloom, and then die back in early summer. Seed capsules “explode” open when they ripen, flinging their seeds to the wind. Because of that, you can expect to find the following year’s seedlings coming up anywhere in your yard. This characteristic makes the plant a favorite for roadside beautification projects. Seeds can also be planted in the fall. Prefers rich, acidic, well-drained soil. Sun to part-shade. All zones. 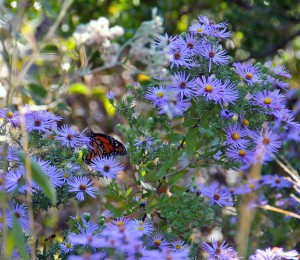 AROMATIC ASTER, Symphyotrichum oblongifolium (formerly Aster oblongifolius), a perennial, is native to the Midwest and most of the eastern US. Grows 1–2 ft. tall, with flowers that bloom prolifically from Sept.– Nov. Every wildlife-friendly yard should have this or another of the many native asters. They grow in all hardiness zones, so there’s no excuse! Good nectar plants, they’re also hosts for butterflies, including the Black Swallowtail, Orange Sulphur, Question Mark, Painted Lady, and Pearl Crescent. Zones 4–7. 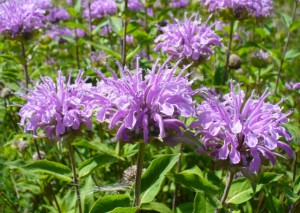 BEE BALM, Monarda didyma, is a perennial n the mint family and, like others in that family, is loved by bees, butterflies, and hummingbirds. You might find it labeled as Monarda or Wild Bergamot. Native to the eastern US, south to GA. 2–4 ft. tall. Blooms July–Aug. Tolerates most soil types, but keep it evenly moist and well-drained. Prefers full sun. Zones 4–9. 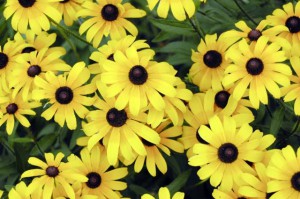 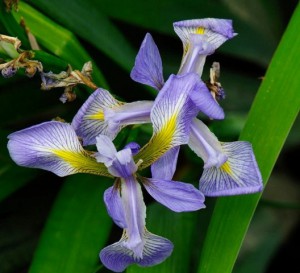 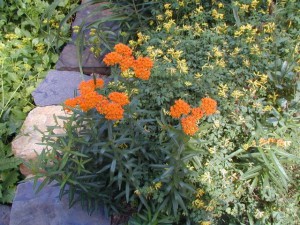 BUTTERFLY WEED, Asclepias tuberosa, a perennial, is native to the eastern and southern US. A milkweed, it’s known by other names, too, including Canada Root, Orange Milkweed, Indian Paintbrush, and Pleurisy Root. Butterflies, hummingbirds, bees, other insects are drawn by their brilliant color and abundant nectar. Ladybugs visit to feast on the aphids it attracts. An important host for Monarch and Queen butterflies. 1–2 ft. tall. Can be grown from seed in dry, sandy/gravelly soil; takes 2–3 years to begin flowering. Zones 4–10. 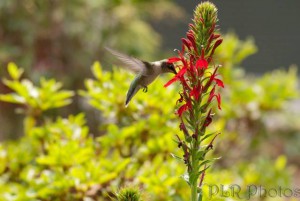 CARDINAL FLOWER, Lobelia cardinalis, a perennial, is native across the US. Relies on hummingbirds for pollination. Requires fertile, moist to wet soil, making it a good plant for water gardens. Will naturalize. Can take full sun in northern climates; elsewhere part-shade. 1–3 ft. tall. Blooms May-Oct. Its name comes from the red robes worn by Roman Catholic cardinals. Zones 2–10. 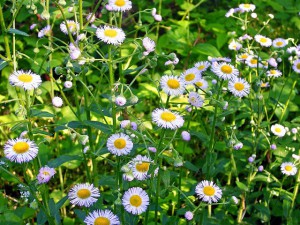 DAISY FLEABANE, Erigeron annuus, is an annual or biennial, depending on where you live. Native to the eastern US, except far north, and some western regions. It grows wild and might just pop up in your yard. If it does, don’t pull it — it’s visited by butterflies, bees, beetles. 1–3 ft. tall and leggy. Blooms June–Oct. The Lynx Flower Moth eats its buds and rabbits like its foliage and flowers. Tolerates clay soil, drought. Zones 2–8. 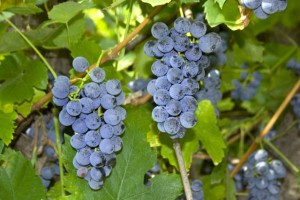 If a FOX GRAPE plant, Vitis labrusca, invites itself into your yard, you might want to let it stay. Native to the eastern half of the US and Canada, it’s highly beneficial for wildlife, not only for its nectarous spring flowers and fruit but birds nest in it and even use its shreddy bark for their nests. It will form tangles and grow 30 feet or more, and its tendrils will cling to fences, trees. If you don’t want that habit, you can trim it annually, or even train it for an arbor. If you can beat the birds to them, grab some grapes for your table. Full sun, water regularly, but don’t overwater.  Zones 1–8. 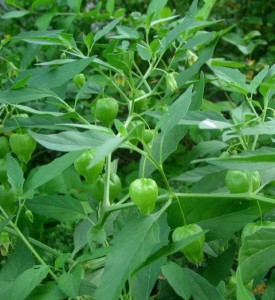 Do GROUNDCHERRIES, Physalis spp., find their way into your yard? If you’ve been calling them weeds and plucking them out, stop it! They’re edible by wildlife. And, humans, too, with some folks intentionally growing them in their veggie gardens for their sweet-tart taste. Not really cherries, they’re in the nightshade (tomato) family. Toxic until ripe, so never eat them green. They fall to the ground when ready to eat. They ripen from August to the first frost. Native to the US, they’re a host plant for the Five-spotted Sphinx Moth. Found along roadsides, old fields, and waste areas. Seeds can be ordered online. Grows 1–3 ft. tall. Also called Cape Gooseberries, not to be confused with true gooseberries. 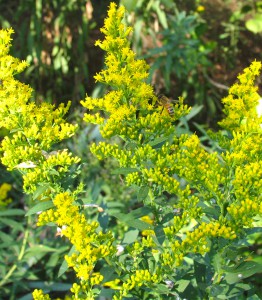 Whether you call them weeds or wildflowers, GOLDENRODS, Solidago spp. are important fall nectar sources for pollinators, especially bees. Butterflies and moths will visit them, too. They can take over, so control by cutting off flower heads before seeds ripen. Don’t worry about their reputation for causing hay fever; they don’t. The culprit is ragweed, which blooms at the same time. (Ragweed pollen is blown by the wind, while goldenrod pollen, large and sticky, is not.) Easily grown; plant seeds in summer or fall in average soil. Needs average moisture. Blooms July–Sept. Grows 1.5 –5 ft. tall. 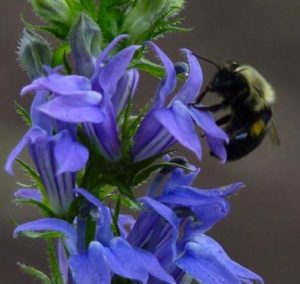 GREAT BLUE LOBELIA, Lobelia siphilitica, is a counterpart of the Cardinal Flower and is often called Blue Cardinal Flower. A native perennial. Perfect for woodland gardens. Especially desirable because it blooms from July clear into Oct. It’s visited by hummingbirds but depends on bees for pollination. 1–3 feet tall. Sun to part-shade. No drought tolerance, requires moist soil. Its species name, siphilitica, is based on an early belief that it cured syphilis. Zones 2–9. 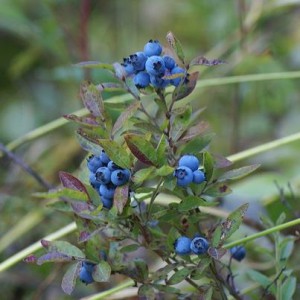 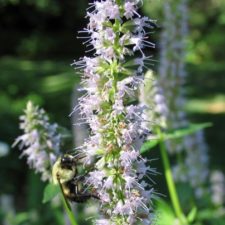 There are numerous species of HYSSOP, Agastache spp. All but one are native to NA. Their flowers come in white, pink, mauve, or purple and attract bees, butterflies, and hummingbirds. About 2 ft. tall, they prefer full sun and moist, well-drained soil, but will tolerate clay. One or more species are sure to fit your particular habitat. All are perennials, but hardiness varies with the species. Anise Hyssop is very hardy. All zones. Got INDIAN BLANKET, Gaillardia pulchella, also called Firewheel, in your butterfly garden? Native to the US, it’ll be visited by butterflies, including the American Painted Lady, and it’s especially important to bees. Depending on where you live it’s a short-lived perennial or an annual. Easy to grow, its showy flowers have a wonderfully long blooming period. Heat and drought tolerant. Deadheading increases bloom time, but if you want plants the next year, allow flowers to reseed. 1–2 ft. tall, full sun to part-shade, all soil types, but prefers it well-drained. Zones 3–10. INDIAN HEMP, Apocynum cannabium, also called Dogbane, is loved by butterflies, skippers, moths, and bees. The plant’s name suggests a link to cannabis, but that’s the only similarity. Like all dogbanes, it’s toxic. A native perennial, it grows throughout NA and southern Canada. Native Americans used to make herbal medicines from their roots and strong string and rope from their fiber. A good plant for naturalized butterfly gardens. It spreads, so plant it where it won’t crowd out other perennials. 2–4 ft. tall. Full sun. Dry to medium, sandy soil. Zones 4–8. There are two plants called PURPLE MILKWEED. One is Asclepias cordifolia, also known as Heart Leaf Milkweed, native to the western US, and the other is Asclepias purpurascens, native to the eastern US. These milkweeds are less common than Butterfly Weed but equally appealing as a nectar plant and host to the Monarch and many other insects. Non-invasive. Endangered in some areas — don’t remove from the wild. Seeds are available online. Water regularly, but don’t overwater. Grows to 3 ft. tall. Zones 5–9. 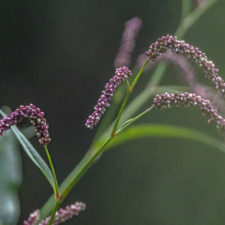 Do you let these plants grow in your yard or pull them as “weeds?” SMARTWEED is a group of herbs in the genus Polygonum that are loved by butterflies, birds, and bees. Smartweed is found across the US, except for Washing, Idaho, Utah. Look for lance-shaped leaves and flowers on spikes and, depending on the species, they may be pink, red, or white. Some species have upright spikes, while others have drooping ones. Safe for humans to eat when cooked, but don’t chew it raw. Some are rather mild, but others will really “smart” in your mouth — they’re sometimes called “nature’s pepper.” Full sun to light shade; moist, nutrient-rich soil. All zones. People who have SPOTTED JEWELWEED, Impatiens capensis, love it. Maybe you’ve heard of it as Touch-Me-Not because when a seed pod is touched, the seeds explode out of it. It’s an annual that’s visited by hummingbirds, butterflies, bees, and other nectar-loving critters. It self-seeds, so deadhead if you don’t want it proliferating. Forms dense stands up to 4+ ft. high. Part-sun to full shade. Most soil types, moist to wet. Plants may be available locally in the spring; also online. Seeds need four or more weeks of cold weather for germination, so sow them in the fall. Native to the continental US, except Mont., Utah, Alaska, and most of Canada. Zones 4–10. 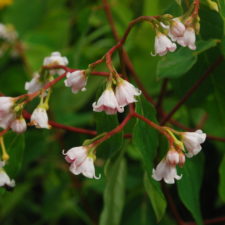 SPREADING DOGBANE, Apocynum androsaemifolium, is native across the US and Canada. It spreads rapidly from underground stems, so plant it in a large area or plan to spend time controlling it. Its nectar is an important food source for insects, but it’s toxic to pets, humans, other mammals. 2–4 ft. tall, bushy, blooms June–Aug. Full to part shade. Dry to medium soil. All zones. SWAMP ROSE MALLOW, Hibiscus Moscheutos, is loved by hummingbirds and insects for its nectarous flowers. Ducks eat the seeds. Others use it for cover. Adaptable to drought, but prefers lots of water. A native perennial of the Southeast, it thrives in moist or swampy soil in large colonies alongside freshwater rivers and streams. Stems grow about 8 ft. tall. Full to partial sun. Zones 5–10. VIRGINIA STRAWBERRY, Fragaria virginiana, plants deliver fine, sweet berries that birds love — and people, too. You might not want to share it with wildlife! All the cultivated strawberries of today are hybrids from this native species and a SA species. The seeds don’t germinate well, so space plantlets a few inches apart in sun to part-shade. Tolerates dry soil. All zones. 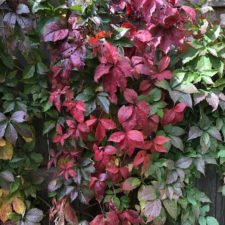 Virginia Creeper in the fall as it changes from green to red foliage (Ross Dunn/Flickr; CC BY-SA 2.0)

VIRGINIA CREEPER, Parthenocissus quinquefolia, is a native vine. Like ivy, its tendrils will find a hold on just about anything — and it grows and grows. In summer, it’s a host plant for Pandorus and Achemon sphinx moths and others, and it benefits other wildlife by providing cover within its thick foliage. It’s beautiful covering fences and walls. In the fall, it turns brilliant red and its purplish-black berries are a feast for birds. Any soil, drought tolerant, sun to part shade. Zones 3–9. YELLOW HONEYSUCKLE, Lonicera flava, is native to eastern parts of the US but will grow almost anywhere. Showy, bright yellow flowers in spring to mid-summer are visited by hummingbirds and butterflies. Clusters of red fruits in late summer aren’t edible by humans, but birds love them. It’s non-invasive and should not be confused with weedy, invasive Japanese Honeysuckle. Best in sun, but tolerates part shade. Most soil types, medium water. May be hard to find locally, but available online. Zones 4-9.