You are at: Home » Insects » Explore an insect-friendly yard – 2

Their ‘straw’ goes with them
The butterflies on your flowers are sipping nectar, too. They sip through a “proboscis,” a tube designed for sucking liquids. When not being used, these insects keep their proboscis rolled up (as shown in the photo above). Where bees feed themselves and also take nectar back to the hive, the butterflies are feeding only themselves.

Once a butterfly lays her eggs, they’re on their own, as are the tiny caterpillars who will emerge from them. So, the female scouts for just the right plant: one her caterpillars can use for food when they hatch. The parsley plants in your garden are precisely what a Black Swallowtail butterfly will seek for her eggs. Tomato or lilac plants won’t do, she insists on a member of the carrot family.

Many butterfly caterpillars have no defenses at all, save for green or brown coloration that helps them blend into their surroundings. However, the Black Swallowtail caterpillar has a defense in the form of a very offensive odor she can emit to help repel predators. It comes from a V-shaped organ located behind her head, ordinarily kept out of sight. To see the organ gently touch the caterpillar with your finger. It’s harmless and will feel dry to the touch. It’ll react by quickly contorting its body — you can feel its musculature. Like a Jack-in-the-box, you’ll see the bright-orange V pop right up and immediately smell the strong odor. In a few moments, if there’s no further provocation, it’ll relax, go back to its munching, and the smell will dissipate. It will need lots of it on its way to becoming a butterfly — this smelly defense won’t deter all predators and life for this caterpillar (and most others) is fraught with danger. 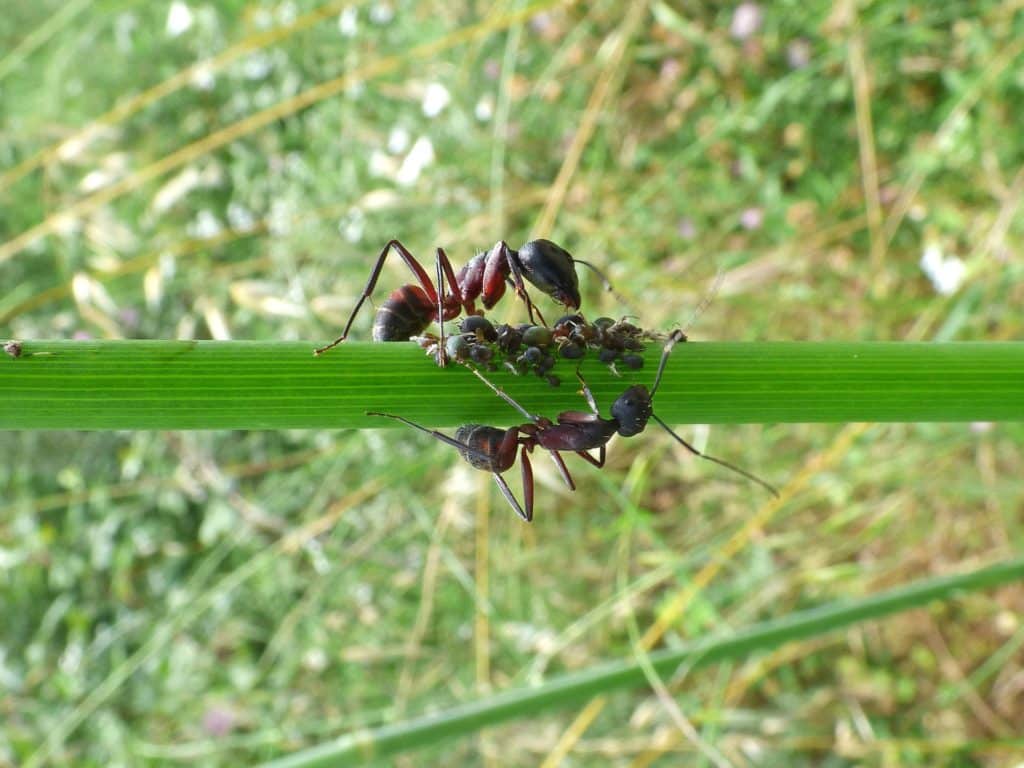 Farming the insect way
Looking more closely at your plants, do you see aphids? These tiny, pear-shaped, mostly all-female insects feed in colonies and suck nutritious plant juices needed by young shoots and twigs. Aphids can be very destructive to plants if there’s a substantial infestation. However, they’re a favorite prey of ladybugs, green lacewings, hoverflies and others, so that would seem to be the end of their story.

But, as it happens, aphids have friends in high places: Many ant species prize aphids as “pets.” Aphids excrete a sugary waste product (called honeydew) that some ant species like so well they herd and keep aphids “stabled.” At night the aphids are kept in long chambers dug along the stalk of a plant. The aphids are carried each day by the ants to their grazing “pasture” on the plant and carried again at night back to their place of safety. Not just that, but ant patrols guard them. Precious “livestock,” indeed!

The aphid pets don’t try to escape. They have fresh plant food and a SWAT team at hand. It’s a pretty easy life for these lucky ones. Study the colony of aphids on your plant, and you might see ants “milking” aphids — that is, lapping up honeydew even as it’s being excreted. In spite of ant protectors, a healthy wildlife habitat has more than enough predators to keep the aphid population under control.

Surveying the milkweed
We all know the story of everybody’s favorite butterfly, the valiant Monarch, who flies thousands of miles from and to resting spots in Mexico and southern California. Many folks don’t realize that along the way the Monarchs lay eggs. Have you planted milkweeds in your yard? Monarchs look for milkweeds on which to lay their eggs.

A Monarch female who begins the trip north in spring from down south is the same one who migrated there last fall. She is now seven or eight months old and has flown thousands of miles fighting wind currents and extreme weather. She’s had to search hard to find milkweed plants, and she’s laid hundreds of eggs. Many of the protective orange-and-black scales on her wings have probably been rubbed off, and there may even be an edge missing, or little tears may be making it harder for her to fly. She’s exhausted and weak. About halfway back to her northern range, her body gives out, and she dies. But her story doesn’t end with her death: Her children and even some of her children’s children will continue to press northward, some up into Canada.

In the fall, the last generation of this year’s Monarchs will make the long flight south to their winter home. By day they fly, frequently riding the wind. Like us, they need to stop for meals and so, incidentally, give us the pleasure of seeing them flit from flower to flower. We have an opportunity to watch them then in their prime, at their showiest best. A yard without food for them is a sad yard, indeed. At night they rest, look for them to be hanging in trees, in large roosts. When you begin to start seeing Monarchs regularly during the day, look up, up past the height of your tallest trees, maybe 100 feet into the sky. With luck, you’ll see groups of hundreds, even thousands, as they glide southward. It’s a sight you won’t soon forget.

What else is a mother to do?
Bringing your eyes back down to a lower level — at, say, bare-arm level, where mosquitoes love to alight — do you see one? Hopefully, you’ll see her before she sees you. In truth, mosquitoes don’t see us; they have very poor eyesight and can’t distinguish us from a tree. That would seem to be a good thing, but it doesn’t really matter. Mosquitoes have other ways of finding you: They can sense the carbon dioxide you’re exhaling from 100 feet away, and they’re attracted to it. If you could somehow hold your breath indefinitely, the mosquito would move on, IF it wasn’t also the case that she’s attracted to your body heat. Mosquitoes can sense body heat from 10 feet away. 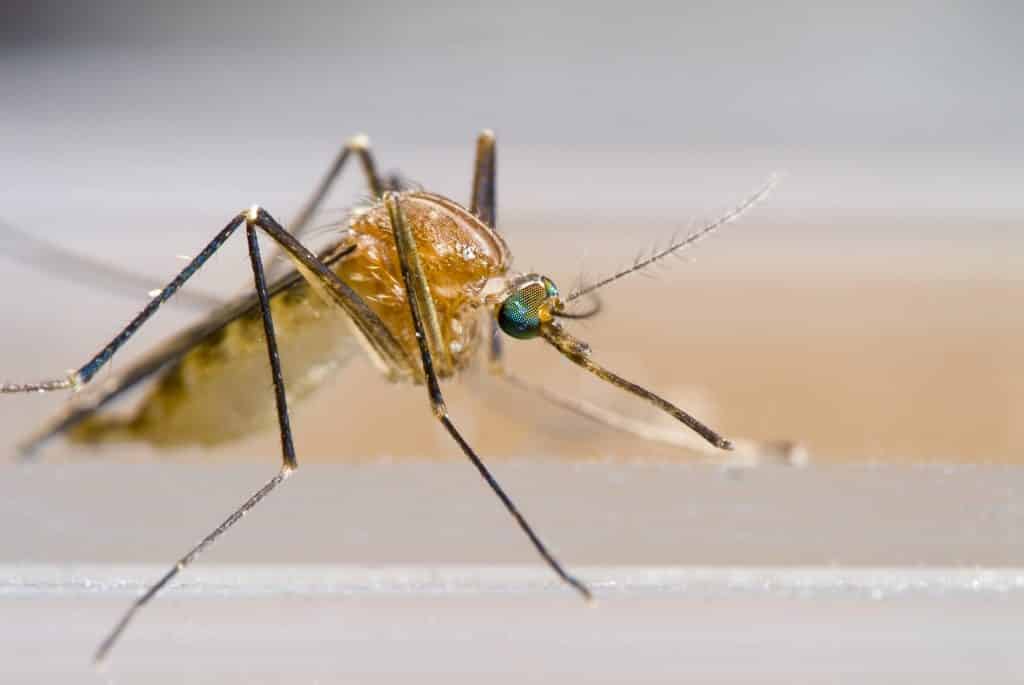 Hidden within this mosquito’s straw-like proboscis is a tube with a very sharp tip designed for piercing skin.

Does it seem they were designed to pick on us? It’s one of nature’s little jokes that the female mosquito needs blood and we have plenty of it. It isn’t personal — they’re just as happy with a dog’s blood or a deer’s blood. They’re happiest of all for a bird’s blood, but if a human happens to be the nearest blood bank, they’ll lower their standards and take us!

It’s the protein in blood they want. Male mosquitoes don’t bite; they can live on nectar, unlike females who need concentrated protein to produce eggs. That itchy, red, swollen, annoying bite you just got? It’s merely a mom doing her job!

It’s easy to make light of mosquitoes, but, of course, their harm isn’t always limited to a red bump on the arm. They can carry diseases. In the U.S., currently most notable is the sometimes deadly West Nile virus. Elsewhere in the world, mosquito-delivered malaria kills more than a million people every year, most of them children.

Can anything good be said about mosquitoes? It would seem not. At least not from a human point of view. But nature doesn’t waste anything, and mosquitoes do serve some beneficial purposes. Males include aphid honeydew in their diet, thereby cleaning plant surfaces of the leftover sticky goo not consumed by ants. They pollinate flowers. A Utah entomologist, Lewis Nielsen, collected mosquitoes and identified pollen grains from more than 30 different plant species on their bodies. He believes they are more important pollinators than credited. And, finally, mosquitoes are food for bats, fish, frogs, toads, turtles, birds and dragonflies, which feed heavily on them.