You are at: Home » Feature stories » Monarch Butterfly life cycle in pictures

Renowned for their beauty, grace, and migrations, Monarch Butterflies, Danaus plexippus, may be the most-loved butterflies in America. They have a fascinating story. From an egg not much larger than the period at the end of this sentence, they evolve magically into 0.02-ounce (0.75 g) adults capable of flying hundreds of miles! It begins with the mating of a male and female. The egg stage:
The female clings to the leaf of a milkweed (and only a milkweed) plant and curls her body to deposit an egg on the underside. She lays her eggs one at a time and on many different plants, so they’ll have a better chance of escaping the sharp eyes of predators. The eggs, which measure about 0.05 x 0.03 inch (1.2 x 0.9 mm), are sticky, so they stay attached. They hatch in five to 10 days. 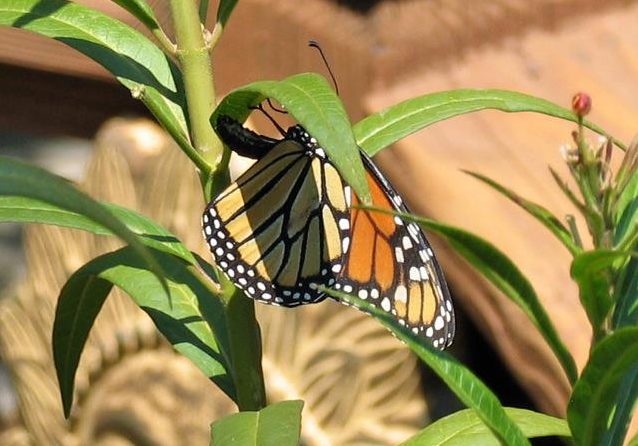 Female Monarch depositing an egg on the underside of a milkweed leaf. (WW)

Caterpillar (larva) stage:
After hatching, their first meal was probably their eggshell, rich in protein. Caterpillars periodically rest, but, otherwise, it’s all about eating, eating, eating to store up fat and proteins for their later metamorphosis into adult butterflies. Pupa stage:
When a caterpillar is ready to pupate, it moves a few feet off the plant and attaches itself to something stable from which to hang. This might be the stem of a neighboring plant, a twig, the lip of a flowerpot or even the underside of a deck chair! With secretions from its mouth, it deposits a sticky silk pad to hang from, attaches its hindmost pair of prolegs and takes on a characteristic J shape.

The prolegs are the caterpillar’s stubby, fleshy legs with black feet that you can easily see below. The caterpillar uses them to cling to plants and other surfaces. Prolegs are temporary and disappear altogether during pupation. Now shedding its skin for the last time, the Monarch isn’t recognizable as a caterpillar or a butterfly. The skin on its back has split open, revealing the underlying green skin which will become its chrysalis (often called, inaccurately, a cocoon.) The old skin (the black-striped part) is being crushed upward as the caterpillar wiggles its body free of it. Ultimately, the old skin will be just a small dark, dry wad with the chrysalis hanging below, and will fall off. 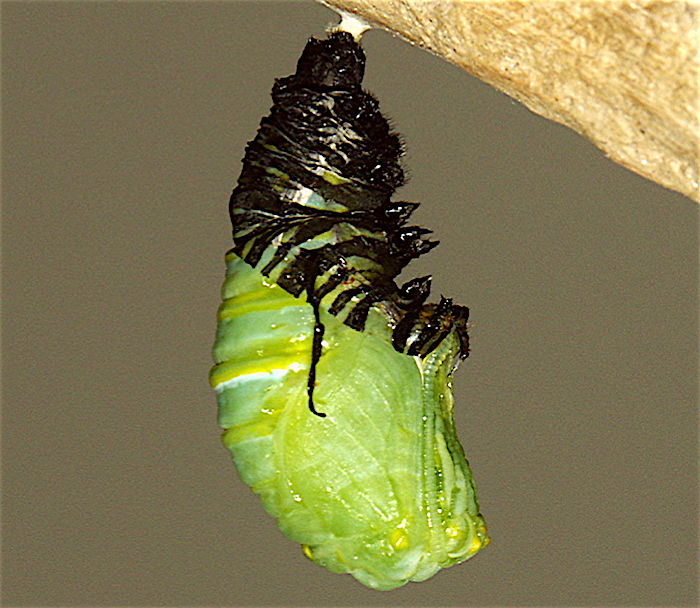 Chrysalis:
Here’s the chrysalis (KRIS-uh-lis). The caterpillar within is undergoing a process that converts its body into a head, eyes, internal organs, wings and all the other body parts that constitute an adult butterfly. The chrysalis is extremely delicate. If it falls, the butterfly will die. Even if no obvious harm comes to them, Monarch pupae have a high mortality rate, for unknown reasons. What goes on inside the chrysalis

The metamorphosis takes about 10 to 14 days. As the caterpillar develops into a butterfly, little by little the shape of its body and tightly folded wings can be seen inside the chrysalis. In the image below, note the golden band with a black line running below it. It exists on all Monarch chrysalises and scientists don’t know its purpose. Emerging (eclosing) as an adult:
Below is a Monarch emerging as an adult and clinging to its chrysalis. Notice that its wings are all wadded up, and they’re floppy and wet. They slowly take shape as the butterfly inflates them with liquid drawn from its abdomen. This gives them form and, once they’re dry, the rigidity that’s necessary for flight.

If anything interferes with this process or causes the wings to become misshapen before they dry, the butterfly will be partially or wholly crippled. If it can’t fly, it’ll starve to death.

Monarch emerging from its chrysalis and inflating its wings. (© Cathy Keifer / Dreamstime)

Visible difference between male and female:
Unlike many butterfly species, there’s an easy way to distinguish a male Monarch from a female: Females have heavier veins in their wings, and they lack two small, black spots that are on the wings of males. Adult stage:
Monarchs live two to six weeks, most of the time mating and laying eggs. The last generation of the season emerges in late summer and early fall. They migrate south to overwinter in Mexico. An exception is the population of Monarchs that inhabit western states and migrate to California. 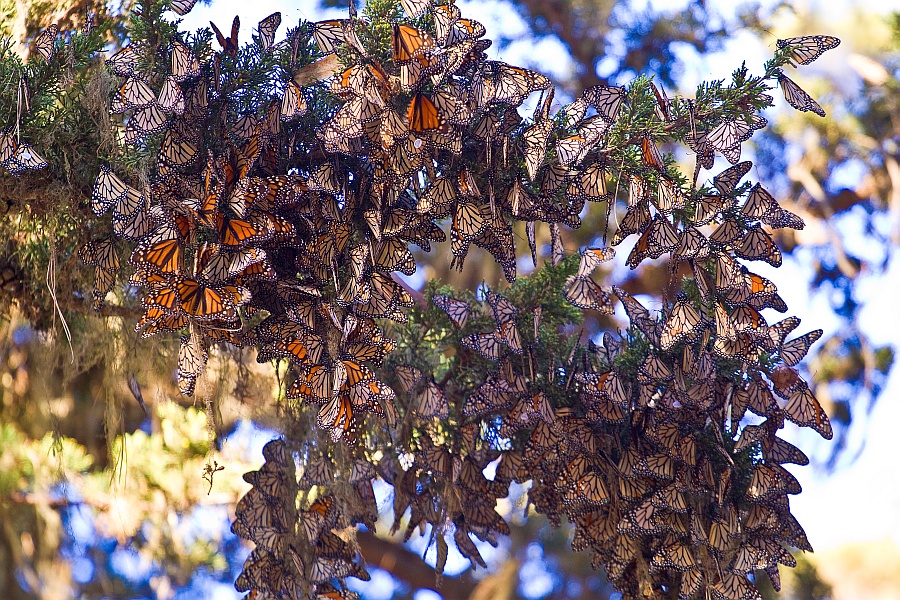 Pop quiz: Is this Monarch a male or female?** 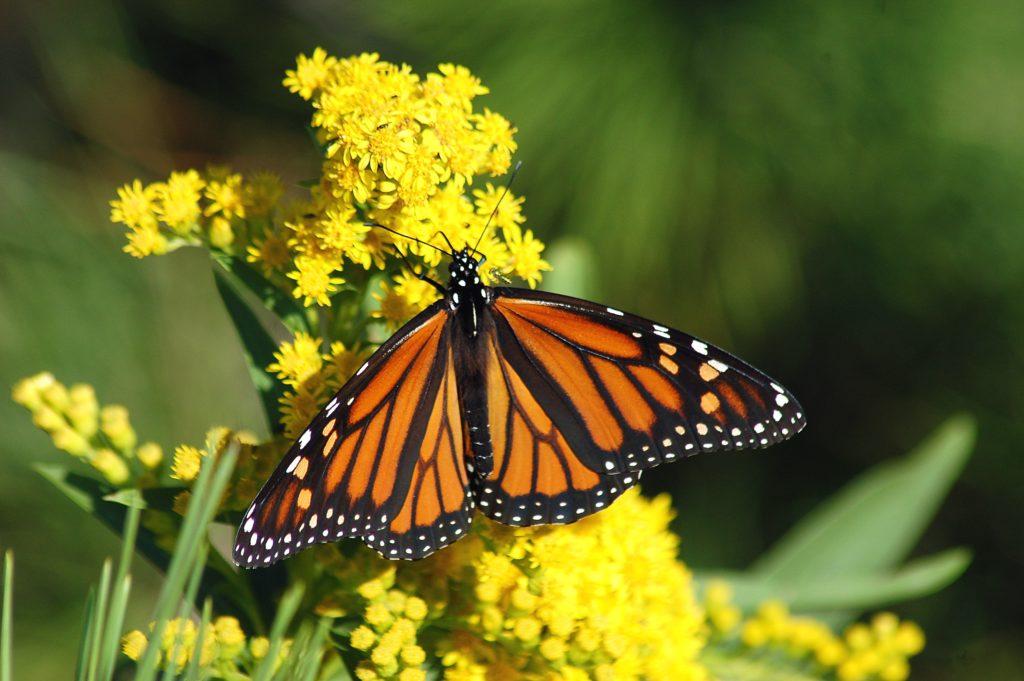 Environmental threats to Monarchs:
Monarch Butterflies are under threat of extinction. There are several reasons. Probably the most significant concerns milkweed plants. Monarchs lay their eggs only on milkweeds, and that’s what their caterpillars eat. The number of milkweeds, however, is steadily decreasing because of genetically engineered crops, principally corn and soybeans, that can withstand being sprayed by a potent herbicide called Round-Up.

Farmers used to kill weeds on their croplands by tilling between rows to chop them up, then turning them into the soil. Always, some milkweeds still survived the process and croplands used to be significant habitats for the plants. But, now, entire fields can be sprayed with Round-up to kill all weeds without harming the crops.

Monarchs face other threats, too, including general insecticide use in yards and gardens, illegal deforestation in their winter sanctuaries, bad weather and possibly climate change.

We may not be able to control these harmful factors individually, but we can play a role in helping these beautiful butterflies, simply by planting as many milkweed plants as possible and avoiding the use of insecticides.

**A female.
Beautiful National Geographic video of Monarchs
Visit Monarchwatch.org for in-depth information about the Monarch