You are at: Home » Insects » Explore an insect-friendly yard – 1

Like many dedicated backyard wildlife enthusiasts, you’ll want to know some basic facts about insects. Most of us initially say “no way,” but later come to think of insects as the most fascinating animals in the yard. (Animals? Yep, they’re members of the animal kingdom). Come with me a little way; you’ll find that insects are interesting — they live lives full of (insect-style) adventure, complete with daring chases, swashbuckling fights, travel, good food and sex!

Let’s pay an imaginary visit to a healthy wildlife habitat. Like, say, the one in your very own backyard — where insects are welcome and abundant.

As we step out of your house, let’s begin by just looking down. Is that an ant you see moving across the patio? Is there just one, or a line of them? A single ant could be a scout looking for food. When she finds some, she runs back to the nest and tells her large family. If there’s a line of ants, they’re rushing to or from a food source that’s been found. Are they carrying anything? An ant can lift 20 times her own weight. You’ll notice they don’t waste time. If humans could run as fast as an ant, relative to their size, we would do our daily jog at 40 miles per hour. 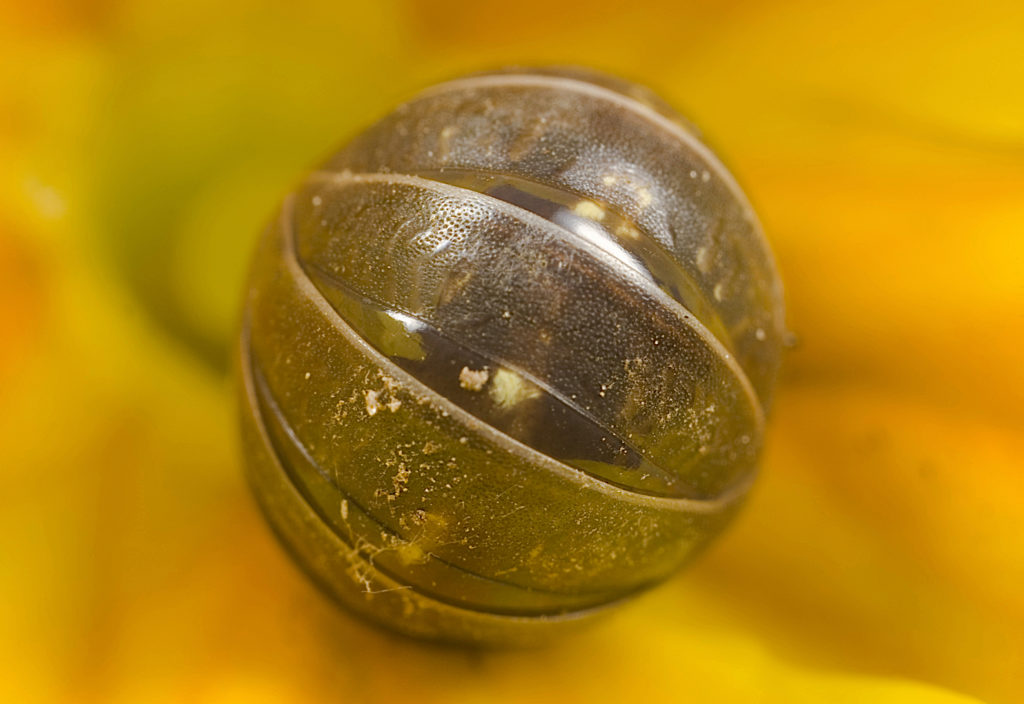 Not an insect, but always hanging out with them, a tightly rolled up pill bug. (© Joseph Calev / iStock)

Look along the margin of the patio, where the turfgrass butts up to it. Pull the grass back a little bit. Are there roly-polies there? Roly-poly bugs (officially called “pill bugs”) aren’t insects. They’re members of the Crustacean family, which also includes shrimp and lobster. Pill bugs like to stay anywhere it’s moist and shady, including under logs, rocks, leaves and boards, where you’ll also find black beetles and rove beetles. They eat decaying vegetation and are food for numerous other species. They roll into a ball of “armor” if threatened. Lightly touch one and watch.

Bzzzz
Look around. See any flying insects? A wasp? Follow it. If it’s a female, she can sting you. If you ignore her, she’ll ignore you, unless you swat or make a sudden movement toward her. She’s way too busy to bother with humans, unless she feels threatened. If she’s a Paper Nest Wasp, she may be seeking nectar to eat. Or she may be hunting for a caterpillar to carry back to her family — the young, developing wasps (larvae) lying in delicate nest cells waiting for food. 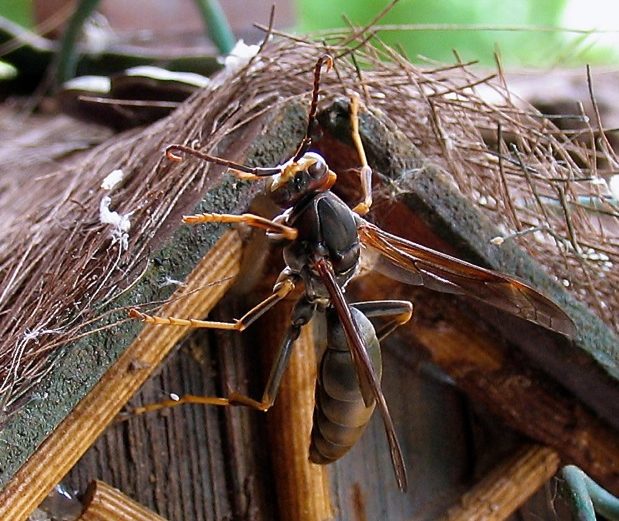 The wasp queen is in the nest, too, resting and keeping the peace if her children squabble. The queen emerged from hibernation in early spring, carrying already-fertilized eggs. All alone, it fell to her to gather the materials and construct an intricate, papery nest of compartments in which to lay her eggs, then feed her young and protect them. She raised them by herself. After that, she laid a second generation of eggs and her older offspring, now adults, are raising the new ones.

Out from under a rock
Look under a rock or log. The large, black beetle you just exposed to sunlight is running fast to hide again. It prefers moonlight and does its work after dark, mostly foraging for other insects. Sometimes though it’ll make a snack of pollen or berries. It’s a yard helper, an important one, because it preys on many undesirable insects, such as slugs, cutworms and root maggots.

Zig-zagging through the grass
Walk across the lawn. Do light-colored moths fly out of the grass as your footsteps disturb them? These are Sod Webworm moths, sometimes called “lawn moths,” who are hiding during the daytime. At dusk, they fly in a zig-zag pattern just above the turf and drop their eggs into the grass. The larvae that hatch feed on the grass leaves at night. A heavy infiltration can damage turf, but, in your yard, where nature is allowed to balance itself, ants, birds and ground beetles are keeping these pests under control.

Don’t step on that twig!
Inspect a tree. Look very closely and maybe you’ll spot a Walking Stick. It looks just like a twig. Long and skinny, with a green or brown body, it stands motionless with his long front legs stretched forward. Walking Sticks are fascinating masters of camouflage and fun to watch. But that’s a challenge—even when they move, they sway slightly, like they’re nothing more than a twig blown gently by the wind. If you find one and disturb it, he might just drop to the ground and play dead, like a fallen twig. At night, however, Walking Sticks come alive and chomp leaves down to nothing. Your greenery’s pretty safe, though, because birds just love to munch on Walking Sticks. 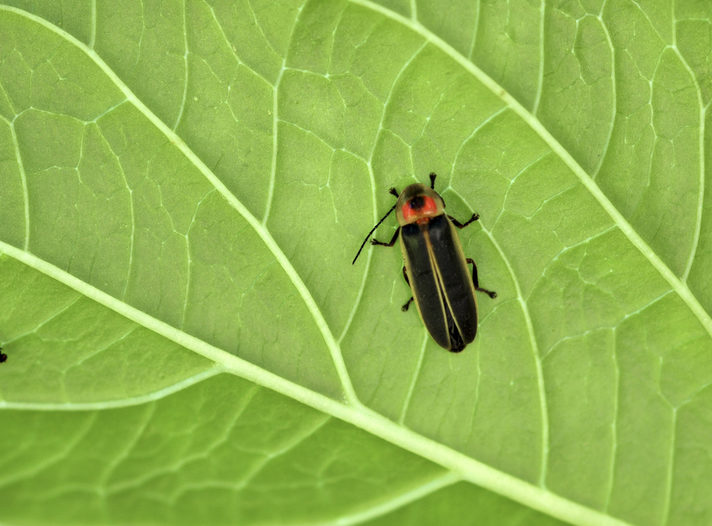 Lightning bug, also known as a firefly. (© Sharon May / Dreamstime)

Grand Insect Station
Look at your pretty flowers in bloom — it’s like Grand Central Station around them, what with all the comings and goings of insects. This is a busy place. We see butterflies, bee flies, bees and wasps, soldier beetles, and a ladybug that’s racing up and down a stem looking for aphids. The mix of species varies a bit throughout the season, depending on who’s in a stage of active development. But, there’s always activity as insects sip, munch, stalk or reproduce among the flowers. Oh, wait…there’s one insect, a lightning bug (or firefly), that’s doing nothing more than sitting quietly on a leaf. It’s resting up for another busy night ahead. Once daytime dims into twilight, it’ll become part of the active night scene of nocturnal insects.

Honeybees are cool, baby
We stay aware of the honeybees buzzing all around us, but we don’t hang back. These are all-female worker bees and, yes, they can sting, but, like wasps, they’re much too busy to be bothered by the presence of humans. They’re collecting nectar and pollen to take back to the hive for the making of honey and food for their hungry larvae. The pollen will be fed to their growing larvae, the nectar will become the colony’s food store for winter. One or two bees may buzz over to see if we’re humongous nectarous flowers. Don’t swat at them and they’ll consider you benign, something like a yard ornament.

The workers are aptly named, for it’s a lot of work to produce one pound of honey: All total the colony’s workers will log 55,000 miles and 5,000,000 flowers for every precious pint. And even a small colony will need 35 pounds of honey to survive the winter. While these worker bees are out collecting nectar (and pollinating flowers, too), others are back at the hive, feeding the queen and her larvae, and keeping the hive scrupulously clean. They have another duty, too: In such close, crowded quarters, it’s important to provide ventilation. Their solution? They take turns arranging themselves in rows and fanning their wings. They stroke them at more than 11,000 times per minute, hence the bee’s buzzing sound we find so threatening and the “hum” of beehives.