You are at:Home»Insects»The fascinating life cycle of insects

You know that familiar question, “Which came first, the chicken or the egg?” Well, we don’t have an answer, but what we do know is that all insects have parents, so let’s start the fascinating life cycle of insects with the “chicken,” so to speak.

If you think about it, does it seem odd that the ladybugs we see on flowers and the ants streaming across the picnic table have a mother and father? That butterflies, crickets, praying mantises and all the other insects, too, came about because a male and female courted and got together for an “intimate” moment? In some cases, mom or dad even nurtures and protects their young after they’re “born.”

Insects might mate during the day or at night, depending on the species. It may occur on land, in water, or in the air. Most insects do it either “dog-style” or end-to-end, but there are many, and a few bizarre, variations

Bedbugs, for example, take copulation to a violent extreme — the male pierces the female’s body with needle-like genitalia and ejaculates directly into her body cavity, a process called (not surprisingly) “traumatic insemination.” The table gets turned rather tragically on passionate Praying Mantis males, because sometimes directly after mating, a hungry female will chomp off her suitor’s head and gobble him right up.

Bedbugs aren’t the only insects with unusual penises: Some species have a brush on the tip or one that’s football-shaped. The earwig male has the bragging rights to two penises and can choose which one he wants to use! Springtail males inseminate secondhand: They string packets of sperm in a circle around a female, and she collects one into her genital opening, essentially fertilizing herself. There are many more weird-sex stories like this in the insect world, which is a strange one, indeed!

Entomologists refer to the reproductive organs of insects collectively as genitalia, just as with humans. But a female insect’s equivalent of a vagina is called the “bursa copulatrix.” She also has two ovaries. Males have two testes and a penis (to us), or an “aedeagus” (ee-DEE-uh-gus) to a by-the-book entomologist. Males and females also have glands and sex-appropriate structures for egg storage or sperm storage and the like. The male also has a “clasper,” which he uses to hold on to the female during copulation. 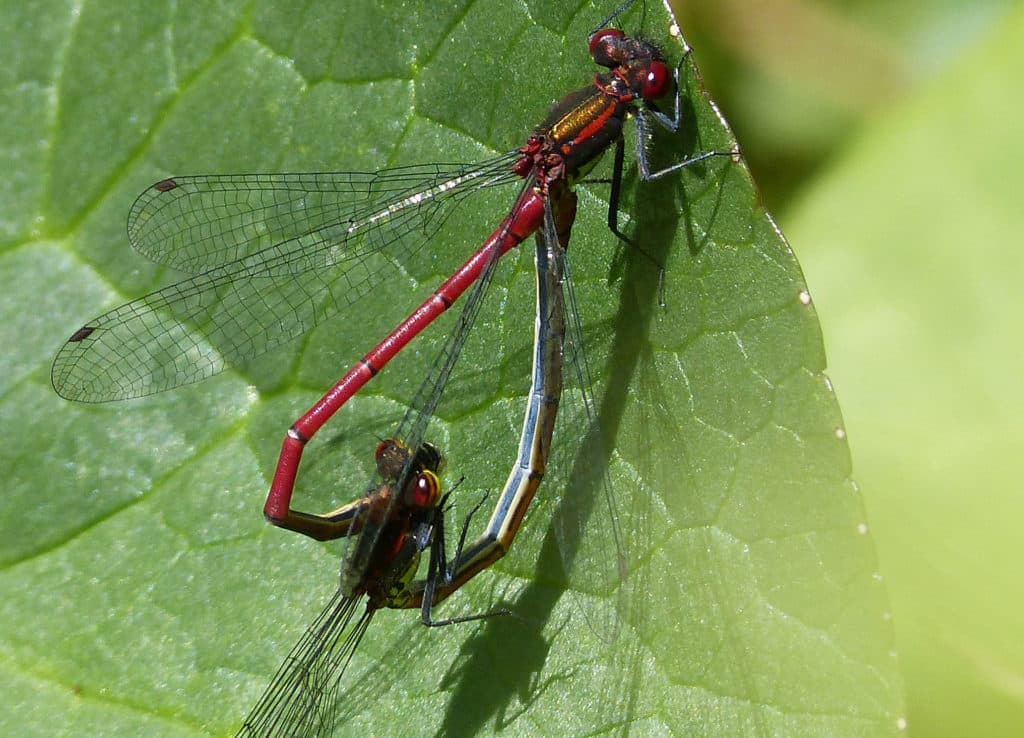 When damselflies mate they often form a conspicuous “heart-shape” with their bodies. The red male, at the top here, has grasped the female right behind her eyes with his clasper, which is located at the end of his abdomen. She has lifted her abdomen up to connect her genitals with his. (Gail Hampshire / Flickr; cc by 2.0)

Here are the ways insects locate and court each other, along with a few examples:

Most female insects deposit eggs in their chosen environment through their ovipositor, a tube-like organ that projects from the end of their abdomen. There are some species, such as aphids, that give birth to live young through a process called ovoviviparity. And, a few, such as some wasp species, reproduce asexually, leaving males entirely out of the equation!

Egg stage: An insect hatches out of an egg laid by its mother on a “host” plant or another favorable environment. The setting she chose for the eggs offers an immediate food source, such a plant’s leaf, for the young insects. When first laid, the egg may be no bigger than the period at the end of this sentence. 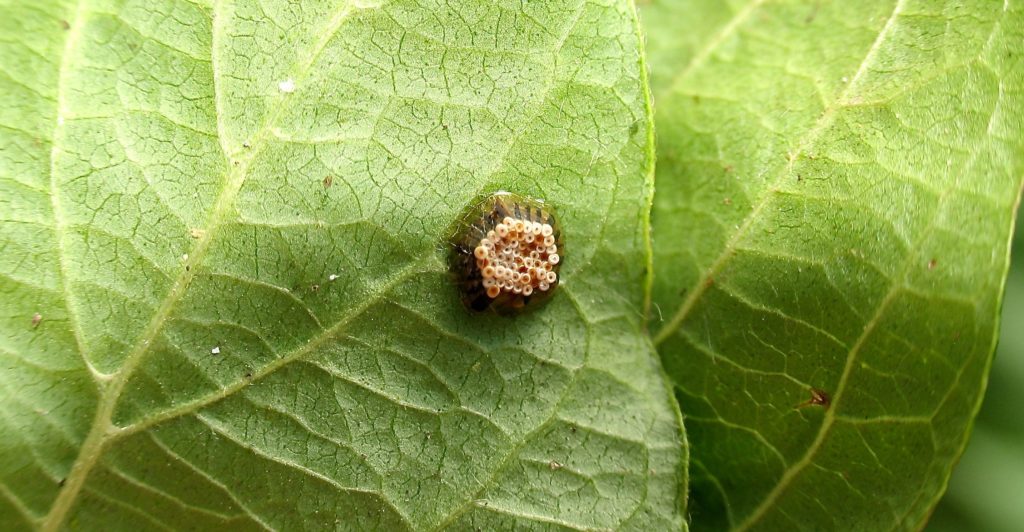 Females lay more than just one egg. Some lay hundreds — nature’s way of ensuring that at least a few offspring will survive. Depending on the species, eggs may be laid singly or in cases containing dozens. They may be laid in or on plants, in or on the soil, in yard debris, in water, and about anywhere else that offers food for the hatchlings, called larvae (LAR-vee; sing: LAR-vuh).

Larva stage: At this stage, an insect is still in its immature form and looks very different from its parents. Although technically called larva, some are familiar to us by other names — a butterfly or moth larva may be called a caterpillar, and a fly larva called a maggot.

A larva doesn’t mate or reproduce. Its sole job is to eat and grow, to take in nutrients for the dramatic stages to come. We might take notice of it as it grows, but more likely we see its path of destruction. Herbivorous insects leave holes in leaves and tree trunks, skeletonized leaves, leaves with chewed edges, flowers literally nipped in the bud, and fruits and veggies with bites taken out. Sometimes even teeny teeth marks can be discerned. 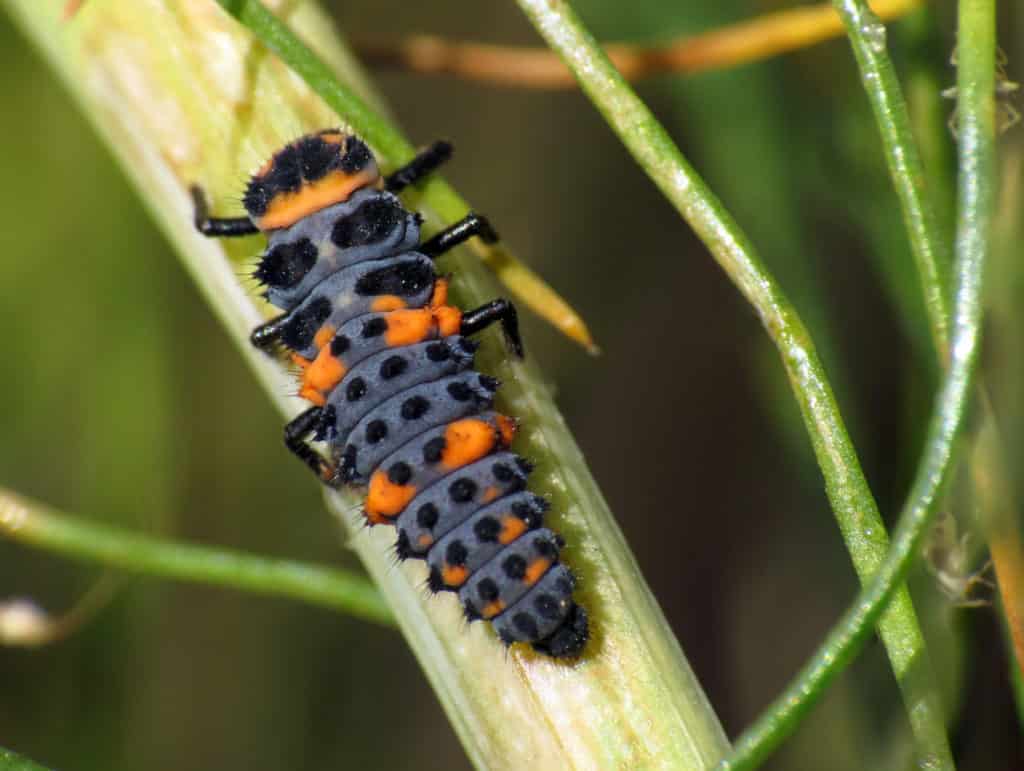 Not all larvae are herbivores; many are ferocious predators. Ladybird beetle (ladybugs) larvae are an example. They look like tiny dragons, and they’re merciless hunting machines, eating just about anything small enough for them to overpower.

Larvae come in all sizes, with some growing very large. One example is the Tobacco Hornworm, Manduca sexta (shown at the top of this page), which grows fat and up to 4 inches long. Minuscule at first, they eventually become easy to spot as they grow larger from munching on their favorite food, tomato plants.

Most insect larvae are worm-like in shape. Fly larvae are those white, wormy, squirmy things called maggots. Beetle larvae are usually whitish and commonly called grubs, or brownish and called wireworms. Some larvae are parasites, and there are others, like mosquito larvae, which live in water. Most larvae have legs, but some do not.

A larva’s skin can stretch only so far as it grows, so it sheds it several times in a process called molting. There’s a name for the stage between molts: instar. When a larva hatches it’s a “first instar.” After it molts for the first time it’s a second instar, and after the second molting it’s a third instar, and so on. There may be anywhere between six and 11 molts, depending on the species.

Pupa: After feeding for about two weeks, the larva enters the pupa (pYOU-puh) stage and is said to be pupating. It constructs a tightly sealed cocoon, or chrysalis (the terms have mostly the same meaning, but are used variously with different orders of insects), around itself.

The pupa appears to be motionless, but a magical transformation is quietly taking place: Embryonic cells within the pupa begin to develop into adult features — jointed legs, mouthparts, eyes, wings, sex organs, antennae and all the rest. Depending on the species, a pupa may remain at this stage for a few days up to months or years. 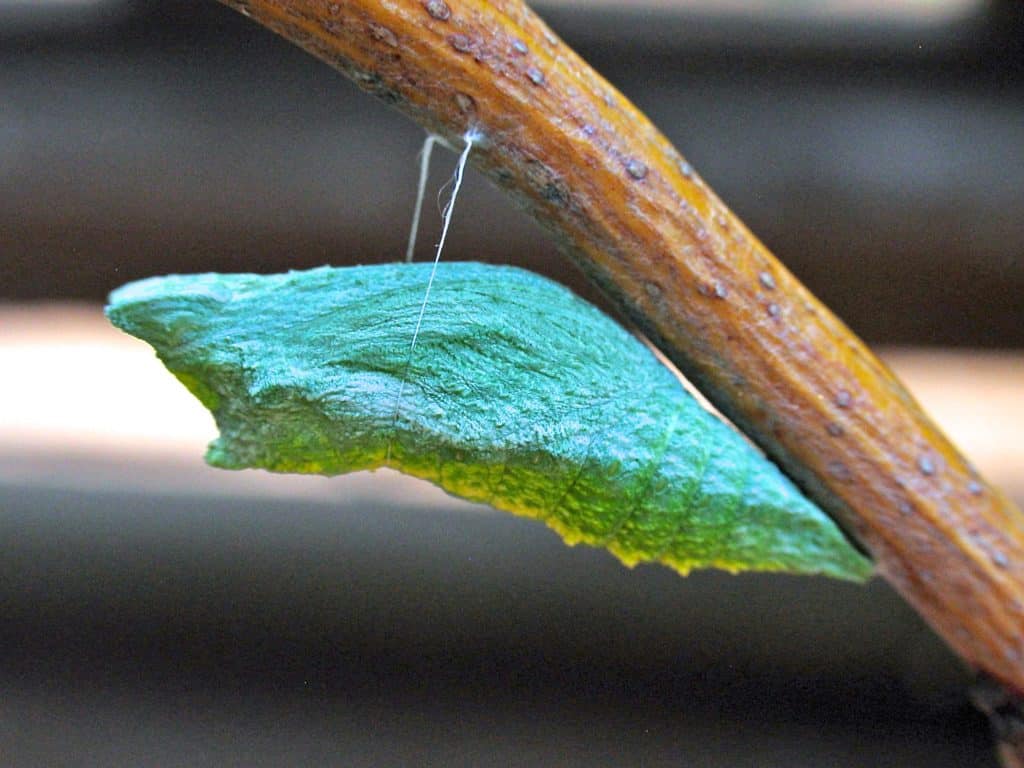 The form and color of cocoons vary. Some insects spin a silk cocoon. Others make one out of their sticky saliva mixed with mud, sand, dead leaves or wood. A cocoon may be just one of the cells in a nest full of cells constructed by the parent. They may be buried or hanging from or within foliage. They may be loose or tight, soft or hard, or have many layers.

A Monarch Butterfly pupa can be seen developing inside its cocoon, which is usually called a chrysalis. (Andy Reago & Chrissy McLaren / Flickr; cc by 2.0)

It’s a dramatic moment when an insect splits through its cocoon: A full-sized adult emerges, ready to feed, mate and complete the last stage of its life. All its growing time is done.

When we see a tiny fly, for instance, it isn’t a young one still growing; it’s a full-grown member of a tiny-fly species. The new adult will probably eat (those of some species don’t eat), solely to take in sufficient nutrients for mating and, for females, egg production. Mayflies live only one or two days, but most insects live longer, from a week or two up to a year or more. 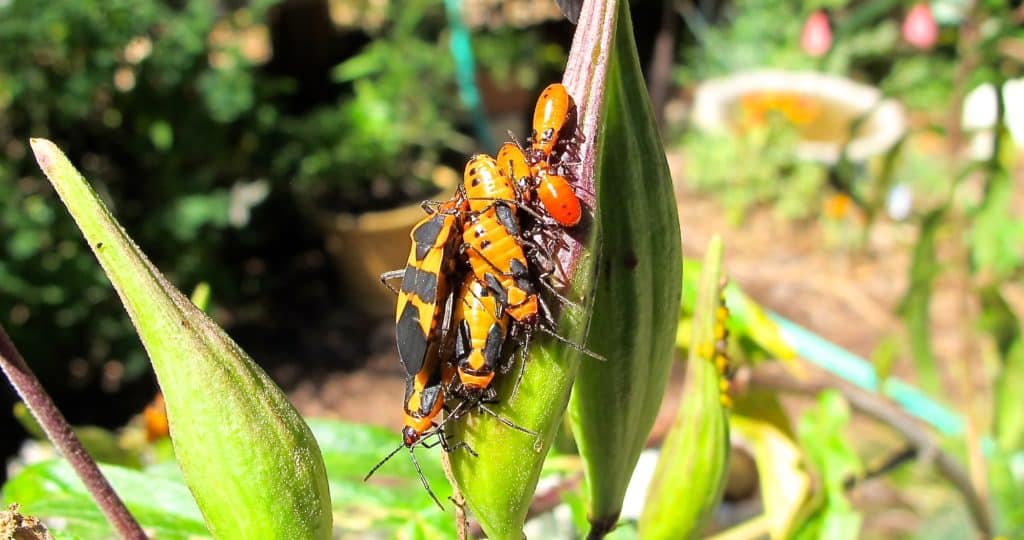 Hemimetabolous insects don’t pupate. Called nymphs, or naiads (NYE-adz) in the case of aquatic species, the offspring look a bit like their parents from the moment they hatch, except for having no wings. Most eat the same foods as their parents. As they eat and grow, they molt several times to accommodate their enlarging bodies. Most molt four to eight times. With their last molt, they’re at their full adult size. Nymphs don’t mate. It’s only as adults that they mate and reproduce.

And, so, on it goes! Another cycle begins when the now-mature males and females head out to produce a new generation.