You are at:Home»Insects»General anatomy of insects

Note: This page describes the anatomy of insects, not spiders. Spiders belong to a different category, Arachnida. You can read all about them here.

There are millions of insect species in the world, and you’ve no doubt seen lots of them “in person.” Have you ever wondered what makes them tick? Literally — do they have a heart? What about a brain? Do they eat or drink? What’s with their buggy eyes? This article will answer those questions, plus give you a general knowledge of how insects are built and how they function.

Insects vary from each other in appearance (think of the difference between a dragonfly and an ant), but all have three things in common, regardless of their individual size, color, behavior or habitat:

Exoskeleton
The exoskeleton is an insect’s entire outer body. Made of chitin, it protects the muscles and organs. Chitin is a chemical mixture made of natural elements and can be firm or yielding, depending on its thickness. So, an insect’s legs and face have thin layers to provide pliability, while the rest of the exoskeleton is thicker and more protective. The exoskeleton is sometimes called the cuticle. 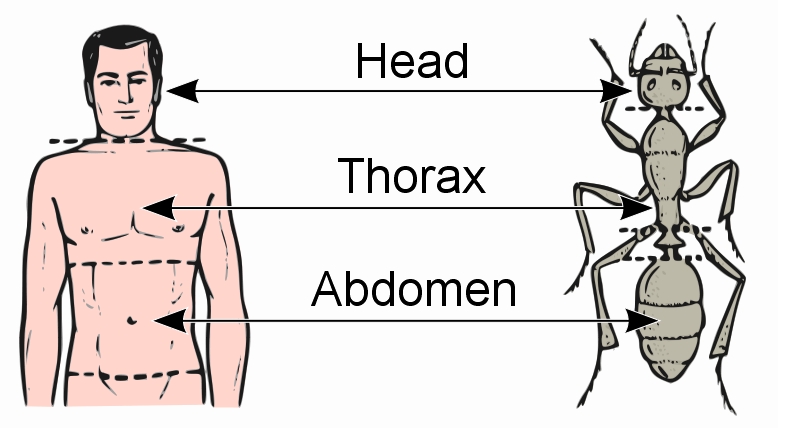 Head
An insect’s head is all about food intake and sensing. The mouthparts are designed for chewing, sucking, piercing or sponging, depending on the insect’s method for ingesting food. For instance, grasshoppers chew their food, while adult butterflies suck their food up. Mouthparts include the labrum and labium (upper and lower “lips”), the maxillae (max-SIL-ee) and the mandibles, which are sets of jaws designed to bite. Some species of insects don’t eat while in the adult stage and lack mouthparts. 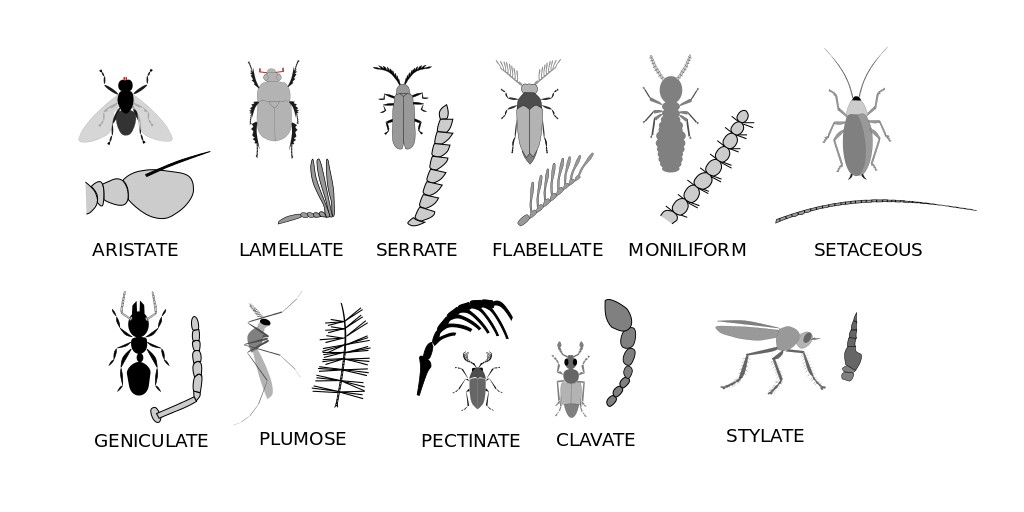 The head has two antennae (plural: an-TEN-ee; sing.: an-TEN-uh). They serve as primary sense organs for smell, touch and taste. They may be long, short or stubby, feathery, bristly, straight or hair-like. Some even look like a string of beads.

Most insects have two large compound eyes. These are formed by hundreds or even thousands of lenses called ommatidia (singular: ommatidium). Each lens is fixed in place and faces a direction that is slightly different from the direction faced by all the other lenses. And, each is equipped with an optic nerve through which it feeds its one tiny visual angle to the brain. The brain integrates them all together to form a complete picture. 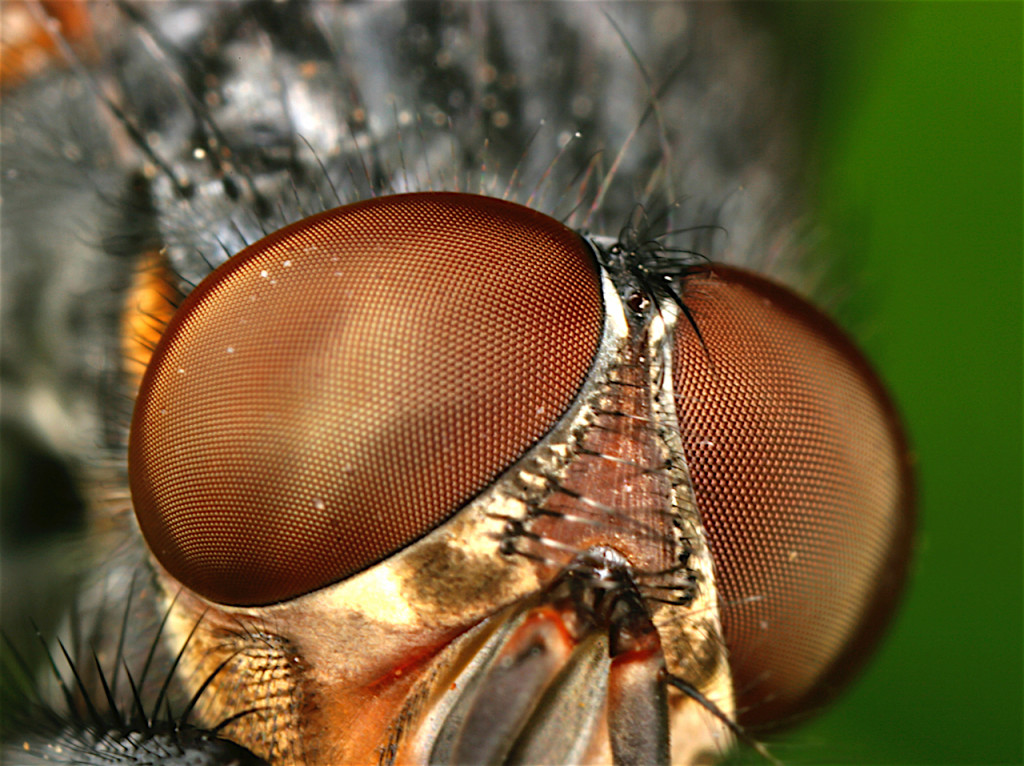 Compound eyes enable insects to detect motion and light changes quickly — even the slightest movement. However, most insects have good eyesight only within a few feet. Some insects also have as many as three “simple eyes,” called ocelli (o-CELL-eye), which are cells sensitive to light and sometimes motion.

Insects have a brain and a nerve bundle, which processes incoming information. Nerve centers elsewhere in the body do, too. Insects don’t have ears. Instead, they detect sound as vibrations in the air. Vibrations are picked up mostly by hairs on an insect’s body, but some species detect with their antennae, too.

Thorax
The thorax is the middle part of the body and is comprised of three segments. In adults, one pair of legs is attached to each segment (although, many larvae are caterpillar or worm-like and don’t have legs). Spiracles, which are openings for air intake, are often present in the segments. Wings are usually present, but not always. 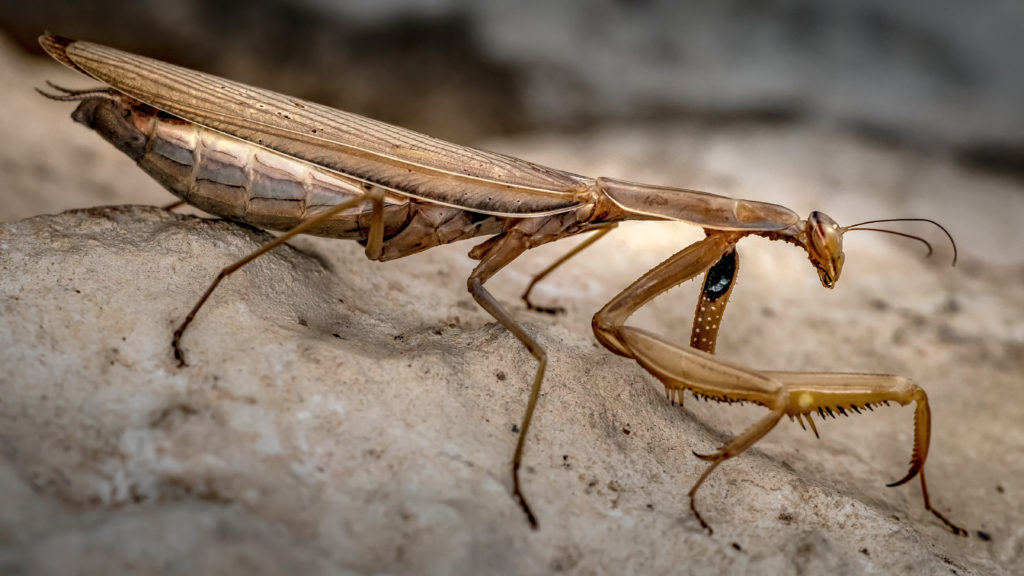 Praying Mantis (Mantis religiosa). Note three pairs of legs; each is attached to a different segment of the thorax. The wings are attached to the thorax and lying flat atop the abdomen, which can be seen underneath. (Vernon Wierin / Flickr; cc by 2.0)

The legs are jointed and each has a femur and tibia. The feet are called tarsi (TAR-sigh; sing. tarsus) and the “toes” are claws. Besides being used for walking, legs may be used for jumping, catching prey, burrowing or swimming. Also, some insects make sounds by rubbing their hind legs together. When walking, insects usually move three legs at a time — the front and back legs on one side and the middle leg on the opposite side. This helps the insect maintain balance.

Different species of insects use their legs for different purposes. For instance, insects that swim have legs that look like paddles. Insects that dig have strong front legs shaped something like shovels, while insects that jump have powerful back legs.

Almost all adult insects have two pairs of wings attached to the thorax, one to the second segment and the other to the third. Some insects, like worker ants and fleas, don’t have wings. Wings are usually thin and are given support by many veins running through them. A very muscular hinge joins them to the thorax and provides the range of motion and strength needed for flight. Adult flies are the only insects that don’t have two pairs of wings. They have one set only, a front pair. The hind wings are modified into halteres (HALL-tiers), little nubs that act as flight stabilizers.

Beetles, unlike most other insects, have hardened forewings called elytra (ELLA-truh). Elytra are used to protect the fragile hind wings, which do all the flying. Other insects, for example, some dragonflies, grasshoppers, and butterflies, have wings that are transparent.

Abdomen
The abdomen is usually the largest part of the body. Within it are the heart and aorta, trachea, digestive tract and reproductive organs. The abdomen is made up of six to 11 segments shaped like rings, making it very flexible. Along the outside are spiracles and at the tip are the external sex organs.

The heart is long and tube-like. It doesn’t transport oxygen, like in humans, but it does beat regularly and pump nutrient-rich hemolymph (insect blood) to the cells and removes waste products. 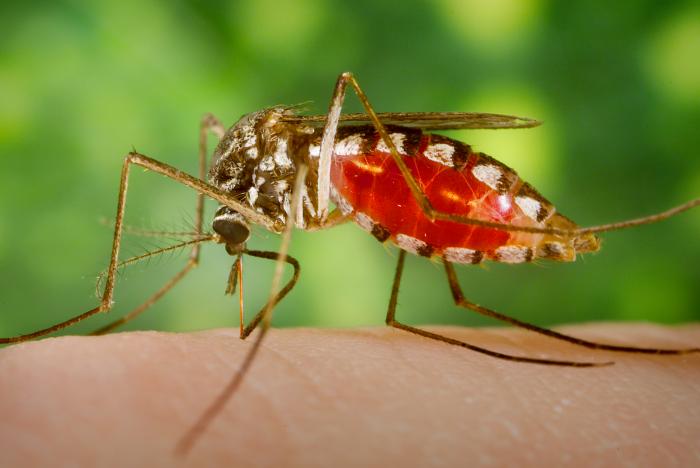 The blood of a human volunteer can be seen filling the abdomen of this mosquito, Armigeres subalbatus, as she feeds. (James Gathany, CDC; PD)

The heart doesn’t have arteries. Instead, blood pumps from the heart to the front of the body and into the head, then back through open areas of the body, where it washes all the organs with nutrients and takes up waste. From there it flows to the rear end and back to the heart. Insect blood isn’t red; it’s greenish, yellowish or clear. (Human blood is red because it contains oxygen-grabbing hemoglobin, which insects don’t need.)

Insects need oxygen to survive. They get it through tiny openings in the sides of their bodies, called spiracles. Air flows through the spiracles and into the trachea. The trachea is tube-like and breaks down into smaller and smaller tubes, feeding air to every cell in the body. Some aquatic insects breathe by way of gills filled with air tubes and get their oxygen from the water, just like fish. Others go to the surface and grab an air bubble, which they carry under their wings or abdomen.

The digestive system is usually a long tube that stretches from the mouth to the anus. It consists of several sections (guts), including a stomach. Nutrients are extracted from food and passed through semi-permeable membranes into the body cavity. The hindmost section is the “intestines” and ends with a rectum that compresses waste products. From there the waste passes out of the body through the anus. 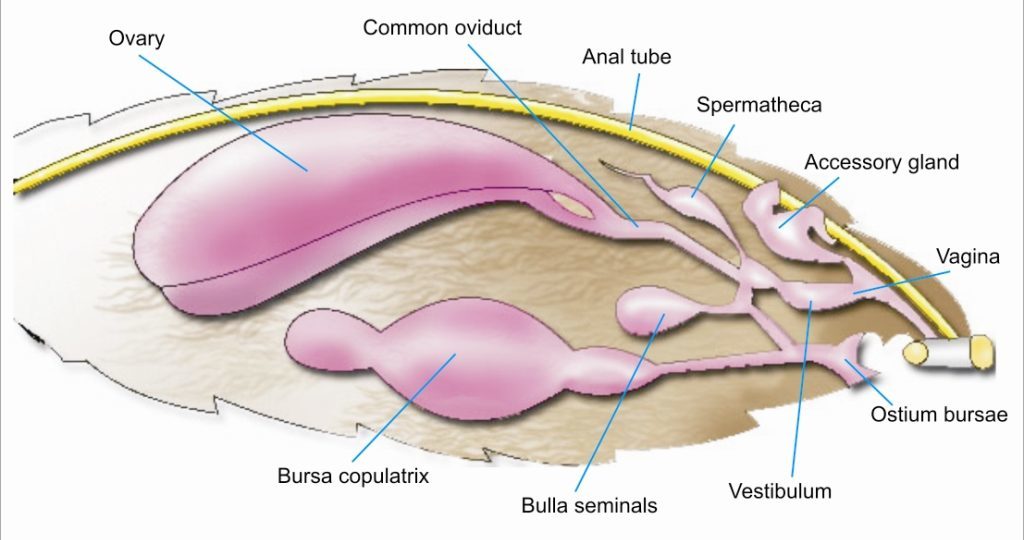 Females have a vagina and a pair of ovaries that produce eggs. Males have a penis and sperm-producing testes (one or, more commonly, two). Insects mate using their external genitalia. Eggs pass from the ovaries through the oviduct (in human females, this is the Fallopian tube) and out the body via a tube called the ovipositor. Learn more about insect reproduction on this page: The fascinating life cycle of insects