You are at: Home » Feature stories » How backyard wildlife survive winter weather

Ever wondered how backyard wildlife survive winter weather? Most disappear over the winter, and then show up again the following spring. But, where do they go and what do they do? Do they hibernate, migrate, die? Yes, yes, and yes! Here are their solutions for enduring freezing temps and scarce food.

Mammals take on the challenge

Mammals stay around us, but are less active. They spend more time sleeping, to conserve energy and stay warm, relying on the extra body fat they’ve put on to help carry them through.

Skunks and raccoons may stay in their dens for weeks at a time, and several females may share the same one. Den sites include such places as abandoned buildings, rock crevices, abandoned burrows of other animals, brush piles, and tree hollows.  All about the Striped Skunk  •  All about the Northern Raccoon

Winter is hardest on Virginia Opossums, as they lack a thick insulating coat of hair, and their tail and toes are bare. They don’t hibernate, but sleep (almost always alone) in a den they’ve insulated with dry grass and leaves. When the weather warms a bit, they venture out to forage.  All about the Virginia Opossum

Gray Squirrels and other tree squirrels spend a lot of time sleeping (not hibernating) in their nests. They venture out for food, mainly the nuts they buried in the fall. In especially brutal weather, they may stay tucked in for several days at a time. Most ground squirrels, on the other hand, hibernate.
When snow covers the ground   •  All about Fox Squirrels and Gray Squirrels

Cottontail Rabbits stay active in the winter. They’re herbivores and the tender vegetation they fed on in warmer months is gone, which forces them to eat the woody parts of plants—bark, buds, and stems of trees and bushes—to the consternation of gardeners. They stay in such places as brush piles, hollow logs, thick brambles, or the abandoned burrows of other animals. 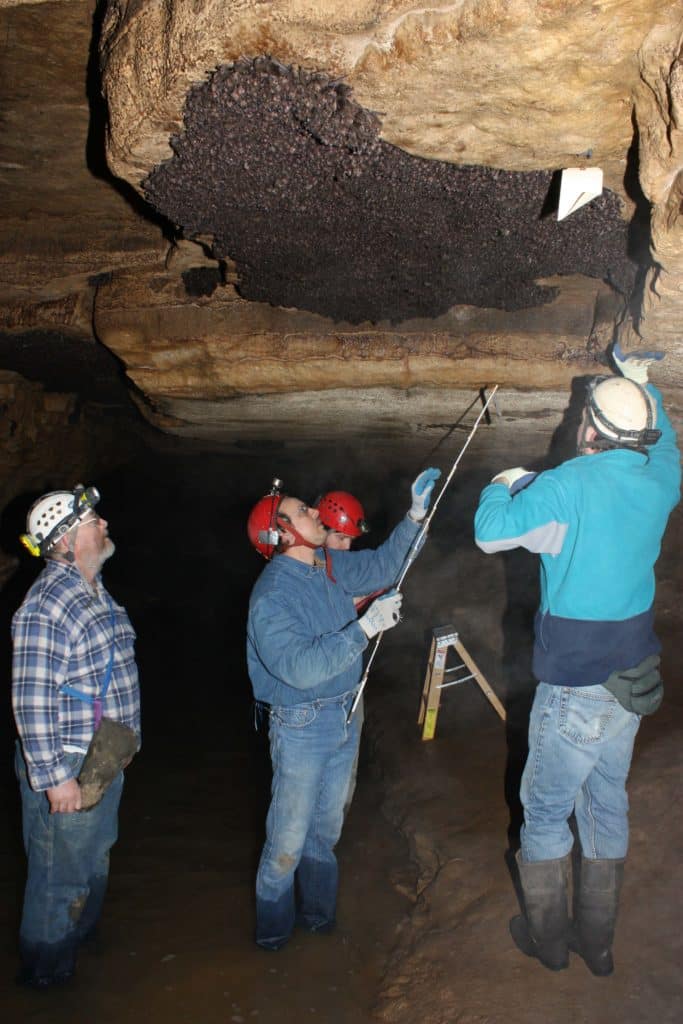 Colony of hibernating bats being measured for size by USFWS / Wiki (PD) staff.

Bats spend the winter in hibernation because most are insect-eaters and, of course, insects aren’t available. Bat colonies use places like unused buildings, old tree hollows, house attics, and caves. They awaken periodically to relieve themselves but don’t leave their shelter. By April they’ve awakened and may venture out a bit as the weather gets warmer. By May, they’re fully active.   All about bats

Birds are the year-round constant in our yards, although the species may vary with the seasons. Northern Cardinals, Downy Woodpeckers, and chickadees stay around, but many others migrate south. In fact, about three hundred fifty of North America’s breeding species migrate, some just a little bit south, but others as far as Central and South America. 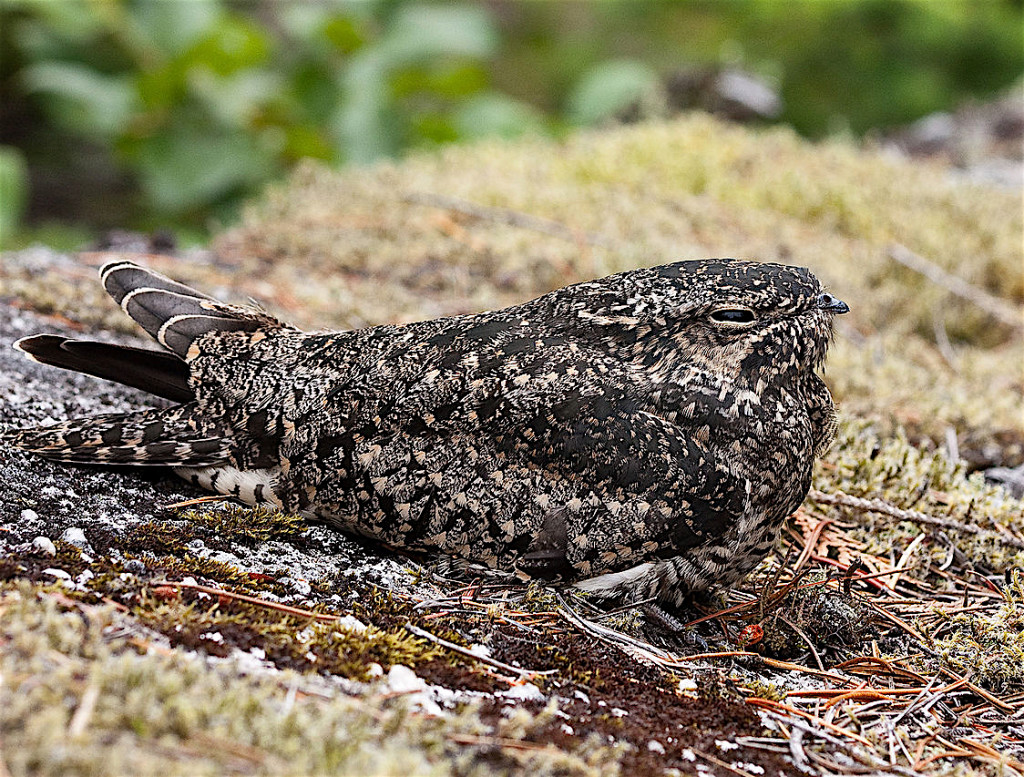 Only one species becomes inactive in the winter. Common Poorwills stay where they are and snuggle into piles of rocks. They remain there for extended periods—from weeks to months—in a state of torpor, a kind of sleep that’s not quite as deep as true hibernation. Their camouflage plumage keeps them well hidden and safe.   All about birds

The Monarch Butterfly is well known for migrating, and you may suspect that many other insects move to warmer areas, too. There are a few that do, including Red Admiral and Painted Lady butterflies and the Green Darner Dragonfly. Most insects, though, stay right where they are. It’s remarkable that such creatures, so delicate and unable to control their body temperature, manage to survive.

The strategy of most insects is to enter a state of dormancy (not actual hibernation). They employ several tactics. They put on extra body fat, reduce the amount of moisture in their bodies to ward off freezing, and bury themselves. Some are protected by an antifreeze-like fluid produced in their body. 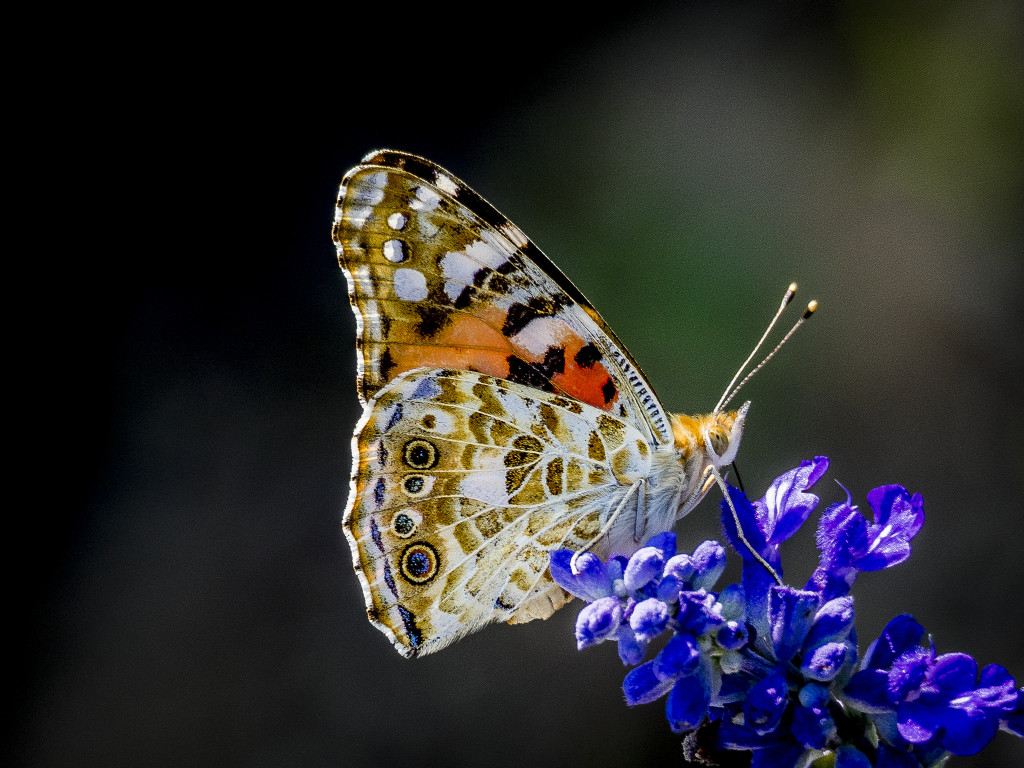 The insects are all around—in the ground, in rock piles, woodpiles, under tree bark, attached to plants, under the lips of flowerpots, under the eaves of our homes, in sheds, under tarps, or any other place that offers some protection. 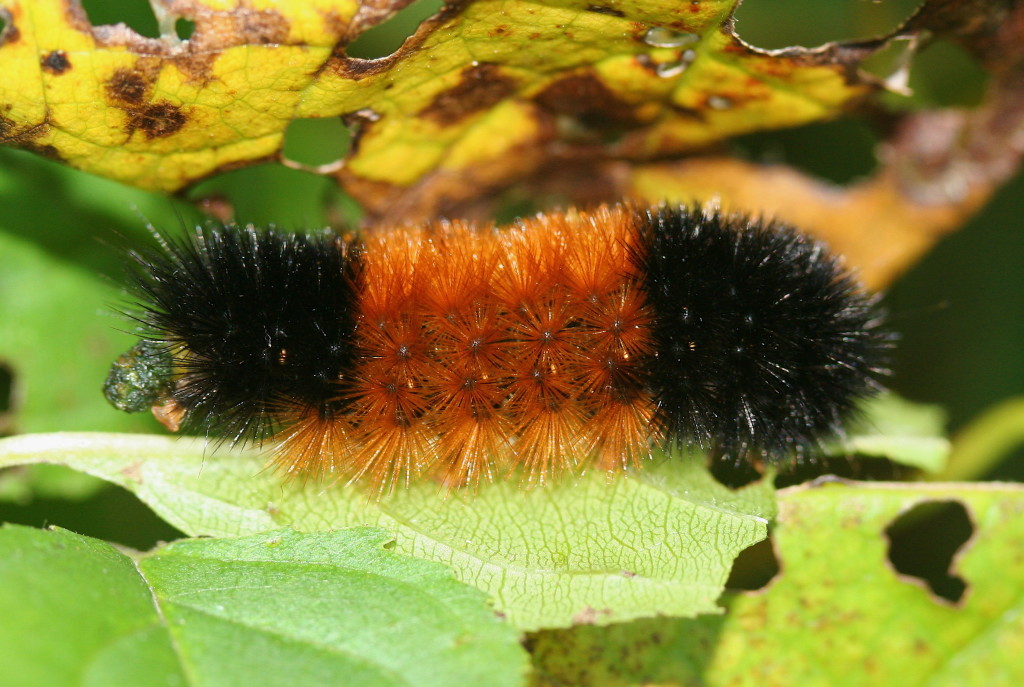 The larvae (caterpillars) of Isabella Tiger Moths, Pyrrharctia isabella, are known as Wooly Bears. They hibernate in that stage. (IronChris / EOL; cc by-sa 3.0)

Honeybees are exceptional because they stay active in their hives. To keep from freezing, they cluster together, flutter their wings and shiver to keep warm. The honey they stored there through the previous summer is their food and has to last them until spring. On days that reach about 65°F (18°C) or higher, they may venture out in search of nectar.  All about honeybees 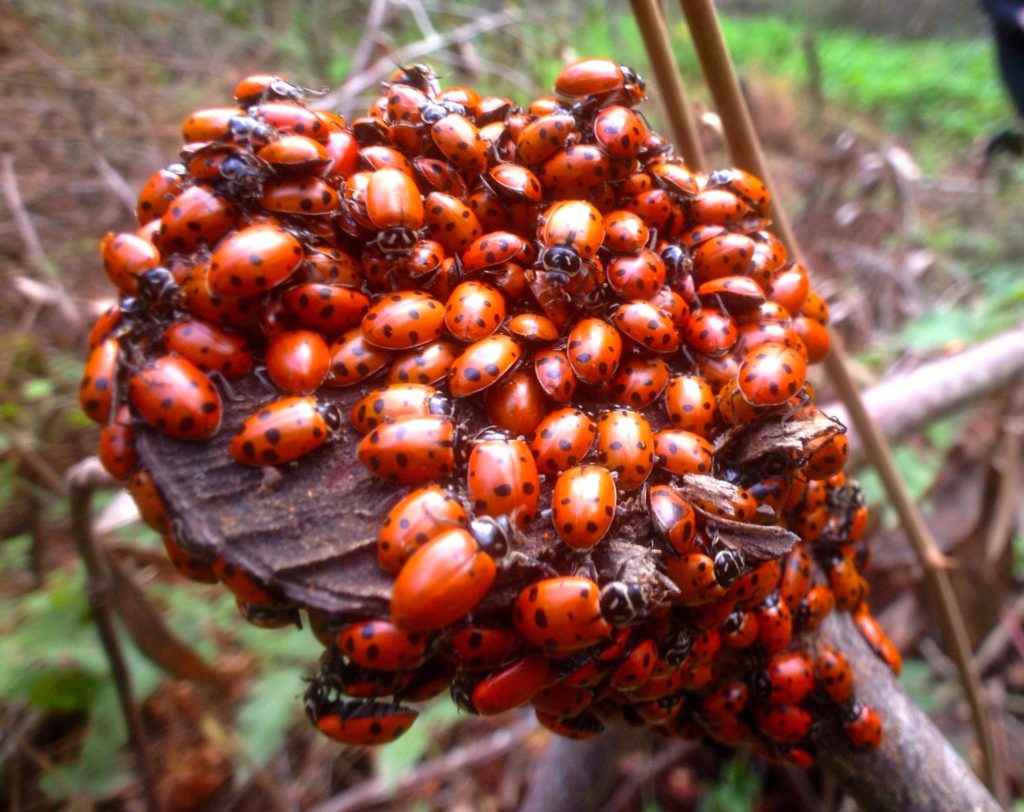 Frogs and toads go under

Frogs hibernate underwater, lying on top of the mud at the bottom or partially buried. Wood frogs are known for their ability to freeze hard as a rock and still re-animate when temperatures warm up. Toads hibernate in protected places, such as caverns, abandoned burrows, a crevice in a log, under a rock or leaf litter, or anywhere else they feel safe. Some hibernate up to eight months.
Watch frozen wood frog awaken  •  All about frogs and toads

It may be surprising to think of earthworms as migrators, but some are! Like insects, they can’t regulate their body temperature and won’t survive freezing weather, so their strategy is to go south in the winter and north in mid-spring. That is if you think of south as “down” and north as “up.” They move below the frost line to avoid freezing and upward when the soil becomes warmer. Some species always stay close to the surface and, consequently, die in the winter. However, they leave eggs, encased in tiny cocoons to protect them from freezing and drying, that will hatch in the spring.   Watch earthworms hatch

Nightcrawlers are the largest of the migrating earthworms. They’re relatively inactive in cold soil. If it warms to 50 to 60° F (10 to 15° C) in the winter, you might see them, but they move back down when temperatures fall again.   All about earthworms  •  Attract earthworms to your yard

Many snail species hibernate. They tuck themselves into crevices, under rocks and leaf-litter, or other places where they’ll be safe from freezing temperatures. They seal the opening of their shell with mucus to keep themselves moist (drying will kill them). Their heart slows from about thirty-six beats per minute to only three or four, and oxygen use is reduced to 1/50th of normal. Often, several will hibernate together. Snails sometimes emerge on very mild winter days.  All about land snails

Hibernating snails seal their opening with an “epiphragm,” a layer of dried mucus. (© Victoria Tucholka / Shutterstock)

Some outdoor spiders die in the winter after leaving behind sacs filled with eggs that defy frigid temperatures. Others spend the season as young spiderlings that hatched before winter, but remain clustered together in their communal egg sac until spring. Some wolf spiders spend the winter as nymphs and become adults in the spring. 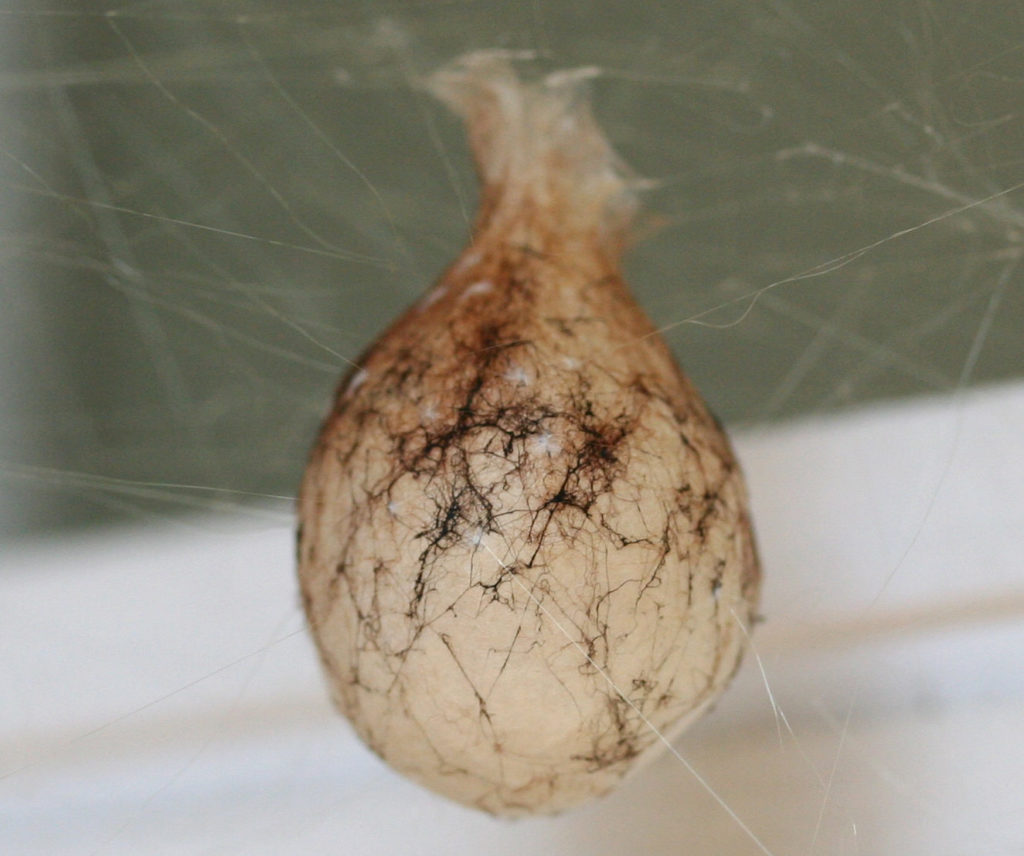 Tarantulas and fishing spiders, on the other hand, hibernate as adults under the bark of trees, in cellars, or any other place that protects them. Sometimes they awaken and roam around on warm winter days in search of hibernating insects to eat. Spiders that live in our houses are active year-round, even though we may not notice them.  All about spiders