You are at: Home » Mammals » All about Striped Skunks

To most people, skunks are dumb, ill-tempered animals best known as stinky roadkill, and good riddance. That’s unfortunate because you’ll find when you read all about striped skunks, they’re docile, non-aggressive, and perfectly happy to leave humans alone as they go quietly about their lives.

Striped Skunks, Mephitis mephitis, are the most common skunks in North America and range across southern Canada and the United States down to the northern border of Mexico. Their natural habitat is open areas or open areas bordered by forests, grasslands, and agricultural lands. So, it’s no surprise that urban yards present an enticing opportunity to them—lots of clipped grass dotted with islands and borders of shade trees and shrubs. And, it’s important to know that skunks play a beneficial role there as predators of pests, such as grubs, snails, and slugs, as well as beetles, wasps, ants, millipedes, centipedes, small snakes, mice, and rats, among others.

Short, stubby legs make them ill-equipped physically for a lot of traveling. Their home range may be up to 1.5 square miles (2.4 km), or as small as 20 acres (8.1 ha). A yard offering plentiful food may reduce their range even more—why stray too far away from a good thing?

The oldest skunk fossil, found in Germany, dates back 11 to 12 million years to the Miocene Epoch, but genetic evidence indicates they actually originated much earlier, 30 to 40 million years ago in the Early-Eocene to Late-Paleocene Epochs. Originally thought to be weasels, DNA evidence now shows skunks did have a common ancestor but more accurately belong in a separate family, Mephitidae, along with stink badgers 1 their closest relatives.

The oldest evidence of skunks in NA, a skull fossil believed to be 9.2 to 9.3 million years old, was found in the Mojave Desert’s Red Rock Canyon. Today there are four species 2 of skunks in NA. Scientists think the most common species, the Striped Skunk, Mephitis mephitis, crossed from Siberia into Canada during ancient times before a landmass connecting the two continents was covered by water as it is now.

When German naturalist I.C.D. von Schreber gave the Striped Skunk its Latin name in 1776, he chose the word Mephitis for both its genus and species, apparently meaning it to have the power of two! It would be hard for anyone who has smelled skunk spray to argue against his reasoning because Mephitis (muh-FIE-tiss) is Latin for “a noxious, pestilential, or foul exhalation from the earth.”3 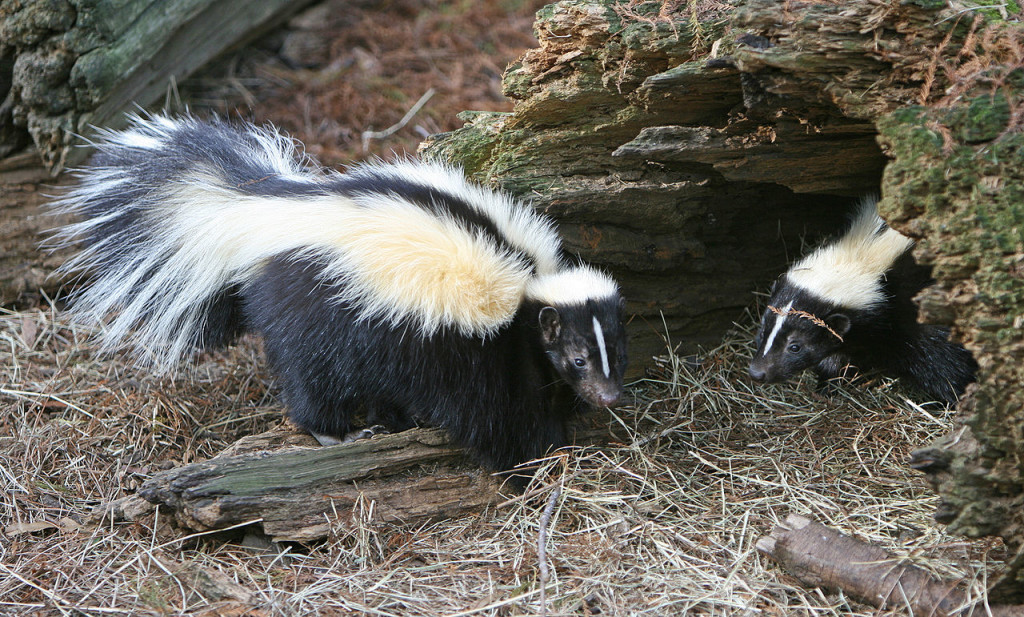 They have a triangle-shaped head with a black nose and short ears. Their hair is black, with two broad, white stripes running from the back of the head to the tail. A thin white stripe runs from their forehead to their nose. Their tail is a bushy mixture of black and white hairs. The stark contrast between their white stripes and black body is very noticeable and sends a warning to predators to stay away. Their legs are short, and their feet have long, curved, strong claws—especially the front ones, which they use for digging.

It’s effective, isn’t it? If you’ve smelled it, you don’t forget it, and you’ll keep away! Humans can detect it in a concentration of 10 parts per billion, the reason we can smell it from long distances. The spray is a mix of seven sulfur-containing compounds called thiols and thioacetates, and effective at driving predators away. It comes from two glands, one on each side of their anus, and they can spray it separately or simultaneously as a defense.

Skunks are best known for their spray, but they use it only as a last resort. For one thing, they’re docile by nature and like to avoid confrontation. But there’s another issue at play, a critical one: The supply of spray they have onboard, so to speak, measures only about one tablespoonful (15 ml) divided between the two glands. That’s enough for five or six effective squirts—but it’s the skunk’s only means of defense, and it takes about 10 days to replace it completely. That’s a long time out in the wild.

Given a chance, a skunk will warn predators and humans away before blasting them. It’ll growl and hiss, stomp its feet, arch its back, chatter, and pretend to charge forward. It may do this several times. You shouldn’t still be standing there! Back away slowly and quietly. If it starts to turn its back on you—RUN! Because the result is even worse than the smell: The liquid causes eyes to sting fiercely, temporarily blinding the foe (human or otherwise). It burns the skin. It can cause nausea. The odor clings to everything it touches, refusing to be rubbed or licked off. After that, a critter won’t intentionally harass a skunk ever again!

Humans, and animals, too, for that matter, usually get sprayed because they’ve come suddenly upon a skunk and startled it. If skunks are known to inhabit your area, always use a flashlight when stepping outside at night. It will alert both you and a skunk of each other’s presence.

Skunks have rather poor vision, with objects going fuzzy about 10 feet away (3 m). Their smelling and hearing are poor, too, but their sense of touch is reportedly excellent.

Striped Skunks are very smart. That’s what owners of pet skunks say, and research backs them up. They learn quickly and have a good memory. Their owners describe them as determined, curious, and so ingenious that baby-locks sometimes have to be put on cupboards and drawers to keep them out. Some can even open refrigerators. They can be litter box trained, they’re friendly, playful, bond with their human companions, and like to cuddle. Watch a playful skunk and puppy: https://bit.ly/1iGGfKG

Striped Skunks are generally pretty quiet, but they do make a few sounds. They hiss, growl, squeal, and coo, as well as other noises that are hard to describe.

Skunks are nocturnal (active at night) and typically rest in their dens in the daytime. But, not always—it isn’t uncommon for them to go out to forage; especially nursing mothers, who are extra hungry. And, their youngsters often come out to play. Here’s one playing with a human: https://www.youtube.com/watch?v=dLz1GSkJeks
Skunks are solitary, except during mating season, which is late-winter to early spring. Males are particularly active during this time, as they go in search of females. Males sometimes fight over females, but they don’t spray each other. 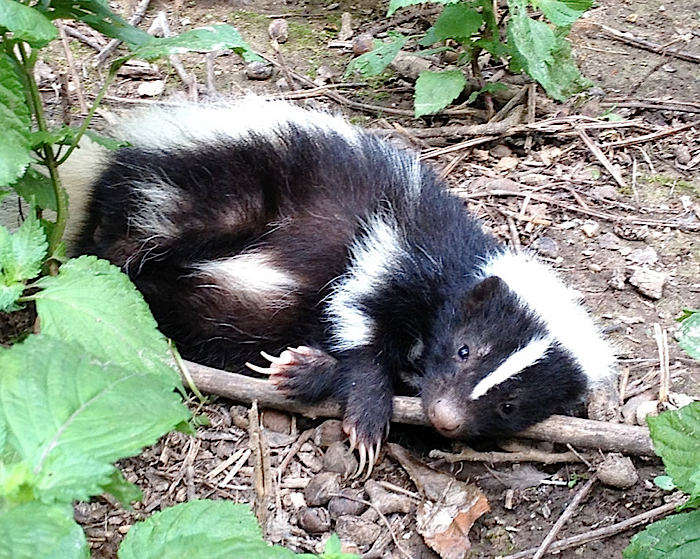 Skunks can climb fences and other obstacles, but not well, and they don’t climb trees. They would rather walk than run, but their short legs can move them in bursts of 4-6 miles per hour (6.4–9.7 kmh), if necessary. They also can swim.

In the fall, skunks begin packing on fat. The extra fat allows them to stay in their dens for days or weeks at a time in the winter, only occasionally waking up to go foraging. They spend the winter in a state of “sleep” called torpor, where their body temperature and metabolism rate go down, but it isn’t as deep as true hibernation. Striped Skunks reach the lowest torpid body temperature of all carnivores, dropping from 98.6°F to 78.8°F (37°C to 26°C).

Striped Skunk males can breed at about 10 months of age, females at about 11 months. Late-winter to early-spring is mating season. Males go their way afterward and don’t participate in the rearing of their offspring.

Females give birth about two months later, typically to five to seven babies, although 10 are possible. At birth, the kits weigh about one ounce (28.3 gm) and are blind, deaf, scantily furred and have barely detectable white stripes. 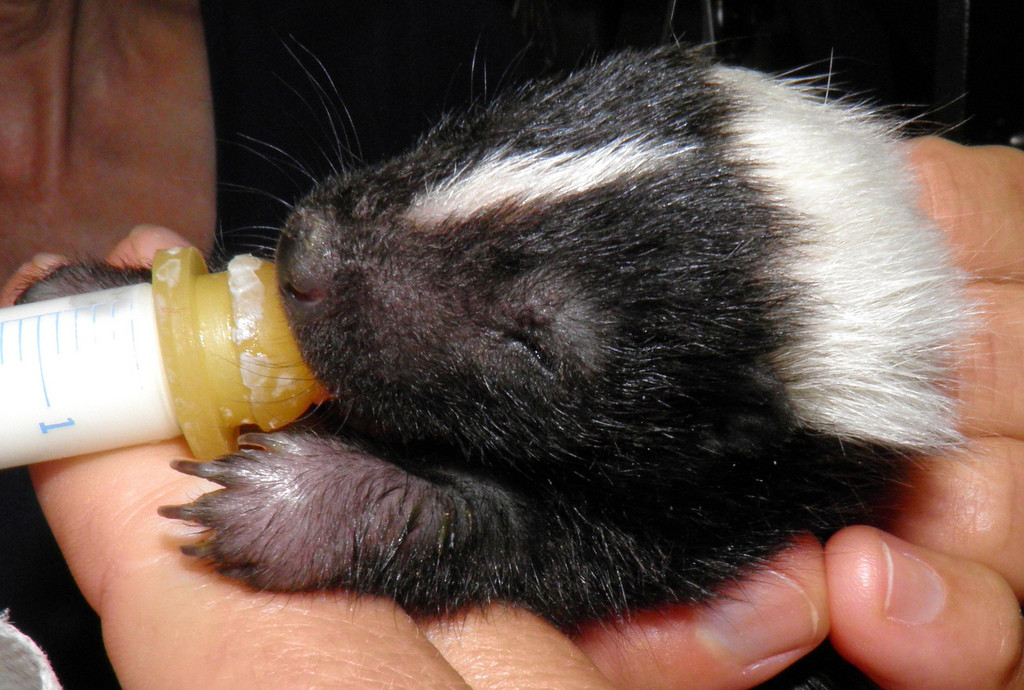 At eight days they begin producing musk, at about three weeks, their eyes open, and at six weeks they start hunting with their mother. She teaches them all her skills: how to dig up grubs and extract larvae from logs, how to raid beehives and locate rodents, root around for eggs and insects, sample through garbage for edibles, and more.

Sometimes a mother will be seen with her kits waddling single file behind her, out for a stroll, small identical versions. They look adorable, but this is one time a skunk is not to be messed with—very protective of her young, the mother might forego her usual warning and immediately spray.

The playful and curious kits are nearly full grown at eight weeks. They’re fully weaned and independent by then, but often stay with their mother over the winter. In the spring, the young males usually wander to a different area, while females tend to remain in close proximity to their mother. Dispersed skunks from the same litter who later meet up are said to be overjoyed at seeing each other again. The mother is capable of breeding a second time in the same year but usually doesn’t unless her first pregnancy failed.

Striped Skunks use dens year-round. Their dens are in well-protected places, such as culverts, rock piles, woodpiles, in or under hollow logs, under porches and sheds, in crawl spaces or drainpipes. They often use abandoned dens of groundhogs and other animals.

They dig a den only if they must. Their dens may have as many as five entrances. Nesting materials include soft twigs, grasses, and leaves. Skunks keep themselves clean and are careful not to use their spray within their den. Still, skunks always have a slightly skunky smell, so their dens do, too.

Skunks are omnivores and opportunists—they eat whatever they find or can catch. Their foraging helps to keep mice, rats, and shrews under control, as well as nuisance insects—grubs, grasshoppers, bees, wasps, crickets, and caterpillars, for example. They love a meal of big, juicy spiders. Yum! They also feed on fish, frogs, salamanders, turtle eggs, eggs of ground-nesting birds, young rabbits, small snakes, leftover pet food, and birdseed. They might top off a meal with grasses or nuts. A fruit salad in season is another delight, made up of fallen, spoiling fruit, such as blackberries, blueberries, and cherries.

The average lifespan of the Striped Skunk is about two years in the wild. Many die of starvation in their first winter, and disease also takes a toll. In captivity, they can live up to 15 years.

The next time you see a skunk lying smashed on the side of a road, you’ll now know it isn’t better off dead. If it’s a mother raising offspring, her young may starve to death or have now lost their teacher of life-saving skills. To her litter mates, she’s a lost playmate who squealed with joy whenever they reunited. And nature has lost an important predator.

Skunks have few predators, except human ones driving vehicles (the most common cause of their death) and those who intentionally kill them as pests. Their only other serious predator is the Great-horned Owl, which seems impervious to their foul odor, but there’s also some predation from Mountain Lions, foxes and hawks.

Rabies is a deadly disease and a serious matter, and skunks are more prone than some other mammals to get it. Still, only 1,365 skunks across the country were found to be infected with rabies in 2015, according to the most recent report from the U.S. Centers for Disease Control. This statistic dramatically illustrates that the percentage of infected skunks is quite low within a population of animals that inhabits the entire country. Still, should you get bitten or scratched, immediately go to your doctor for rabies shots, the only thing that can save you if the skunk was rabid.

Don’t assume, however, that a skunk out in daytime is rabid. As the above statistic shows, it almost certainly isn’t. On the other hand, if it’s displaying abnormal behavior, such as circling, acting aggressive, and having balance issues contact your local animal control department.