You are at: Home » Mammals » Pine squirrels love, love, love their pines!

Raise your paw if you love pines! Pine squirrels sure do. They’re associated with all things pine. They live in pine forests, nest in pines and depend on pine seeds for food. These are the only “pine squirrels” in North America–The Douglas’s, American Red and Mearns’s. 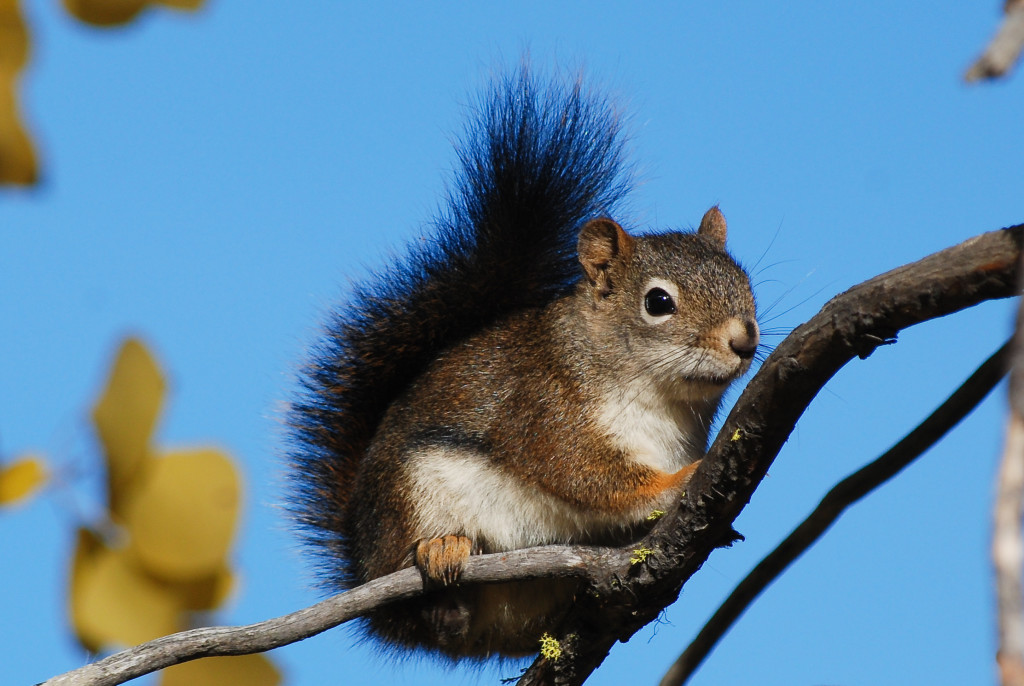 Naturalist John Muir called the Douglas’s (or Douglas) Squirrel the “squirrel of squirrels” because they possess “every attribute peculiarly squirrelish enthusiastically concentrated.” That pretty much defines these bright, feisty and noisy squirrels, who refuse to be ignored! They’ll quickly seize your attention, even though they’re only about a foot long (30 cm), including their tail.

Under their thick hair is a tiny body weighing only about 0.33–0.66 of a pound (150–300 g). Their hair looks distinctly different between summer and winter. In summer, they’re reddish-brown to grayish-brown on the topside. In winter, they’re more grayish overall and may have noticeable ear tufts. 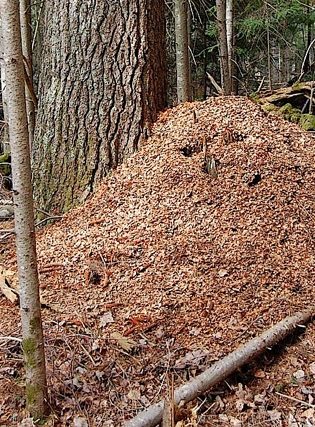 The squirrels are solitary, except during mating season, which is late-February to April. The pups (or kits) are born about one month later. They’ll stay with their mother up to a year, so if you see a group, it’s probably a mother and her offspring.

In summer, Douglas’s Squirrels build nests of twigs, mosses, shredded bark and lichens on tree limbs or in tree forks. In winter, they nest in tree cavities or underground burrows.

The squirrels will eat acorns, fruit, mushrooms, buds, and sap, and visit bird feeders for nuts. But, can you guess their main diet? Yes, of course, it’s conifer seeds. They have a distinctive way of eating pinecone seeds–from the bottom up, rather than top down. (That’s one in the top photo holding a pinecone in that position.) In the fall, they bury pine cones to eat later on. They also sometimes store mushrooms in the fork of trees.

The squirrels often use the same spot year after year while peeling the scales off pinecones. These refuse piles are called middens. Generations of squirrels may use one, with it growing several feet high and wide. 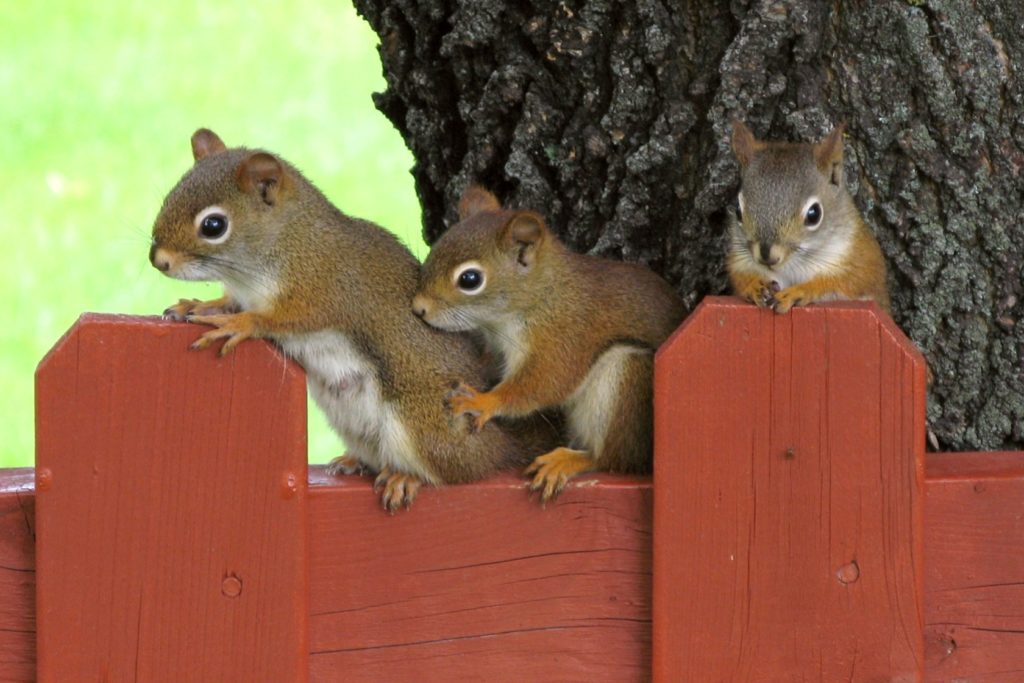 Mother with two of her young. (Gilles Gonthier / Flickr; cc by 2.0)

American Red Squirrels are recognizable by their deep reddish color and their tiny size–only about 6–7 inches long (15–18 cm), plus a 6-inch tail.

The females are receptive to mating for just one day, usually around February, and sometimes for one day around August. They often compensate for their abbreviated estrus cycles by mating with several males. Four or five babies are born 35 to 40 days later. Juveniles have high mortality in their first year, but if they survive it, they may live up to ten years.

The American Red Squirrel is sometimes called a chickaree (same as the Douglas’s’ nickname). It’s one of 25 red squirrel subspecies, with location being the main difference between them. They shouldn’t be confused with the Eurasian Red Squirrel, which is in a different genus,Sciurus vulgaris.

Red squirrels are the most widely distributed of the pine squirrels, with one subspecies or another ranging from Alaska and Canada to the Great Lakes Region, and south and east along the Rocky Mountains. Some populations also dip down into the northeastern United States. An isolated group inhabits southeast Arizona. Named the Mount Graham Pine Squirrel, T. h. grahamenis, they became stranded when the area around them transformed into desert during the last glacial times, between 22 and 12,500 years ago. All red squirrels inhabit conifer forests, but occasionally mixed forests, too. 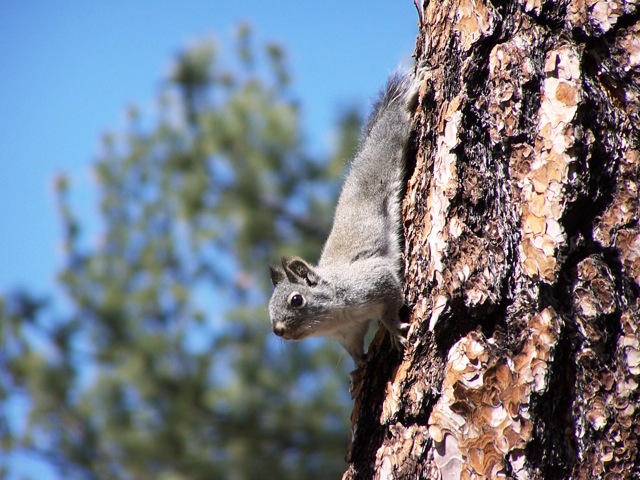 Mearns’s Squirrels live in isolation in the open, dry pine and fir forests of the Sierra de San Pedro Mártir mountain range in Baja California, Mexico, as well as the southern border of California. The heaviest of the pine squirrels at about 9.5 ounces (270 g), genetic evidence suggests they evolved from Douglas’s Squirrels and became separated about twelve thousand years ago.

They’ve made unique adaptations to their rugged habitat. For instance, other squirrels are willing to use leaf nests and burrows for nesting, but the Mearns’s will use only tree cavities and only in large diameter trees. This means that suitable live trees and snags are vital to their survival. Another difference is their jaw strength: While the Douglas and Red squirrels can carry pinecones in their mouth, the Mearns’s can hold bigger ones. Also, unlike the other pine squirrels, they don’t build and defend middens. 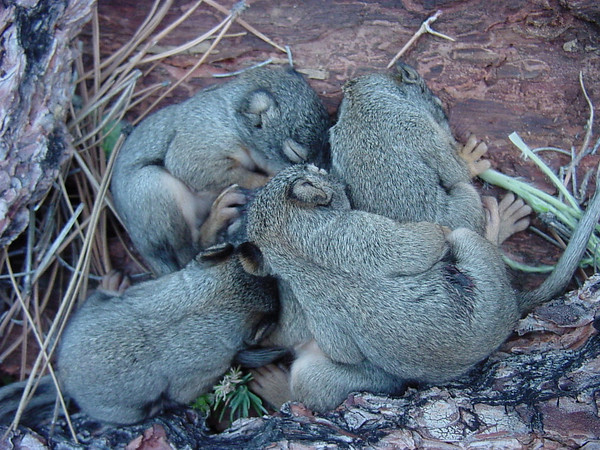 (The baby Mearns’s shown above were found lying exposed at the base of a tree. That meant their mother was probably moving them from an old nest to a new one—something she wouldn’t do without a good reason. Mearns’s researcher, Melissa Merrick, happened to be nearby and heard their pitiful cries—they were under attack by an army of ants! Finding her way to them, Melissa removed the ants, which had already caused wounds, and left the babies on a large piece of bark on the ground, hoping their mother would rescue them soon. And so she did! One by one Mom carried them up the tree. A happy ending!)

Mearns’s are named for Edgar Alexander Mearns (1856–1916), a naturalist and surgeon in the US Army who served for some years in Mexico. The squirrels are listed as threatened in Mexico due to their low population and isolation. The IUCN¹ lists them as endangered. You can learn more about the Mearns’s from Nicolas Ramos-Lara’s study, The Ecology of the Endemic Mearns’s Squirrel.

All about Fox Squirrels and Gray Squirrels