You are at: Home » Special topics » Keep yard safe for wildlife

Once you’ve created a backyard habitat for wildlife, it’s best to let the animals enjoy it without too much disturbance from humans. That isn’t to say we shouldn’t step right out into our yard and continue our human activities — erect a swing set, play with our children, enjoy a barbecue, have a yard party. It only means we are now carrying on side-by-side with lots of wildlife, and we should stay mindful of the consequences of human interference.

Don’t feed them leftovers
Let wild animals find their food in the “wilds” of your yard by critter-proofing your trash container. The enticing smell of dinner leftovers — a mound of chicken bones, a lump of mashed potatoes, a half-eaten piece of buttered bread — will beckon wildlife from far and near. Raccoons, those smart devils, are able to simply lift off an unsecured lid and throw open the gates of heaven to opossums and any other animals that can climb in their with them. Even deer will graze in your garbage, if possible.

Spilled trash presents not just a cleanup problem, but some human food isn’t healthy for wildlife. Deer are attracted to bread and sweets, for example, but those foods can cause dangerous digestive problems for them. 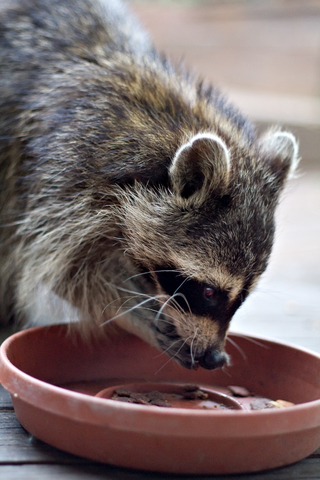 Foiling a trashcan thief
Dispose of leftover food in a garbage disposer, if possible. Many trash hauling companies provide a container to their customers with lids that can be secured. If you’re using another kind of container, it may take some imaginative trial and error to outwit a cunning raccoon. A tight-fitting lid may do the trick, but don’t count on it. You can place a brick on top to weight the lid down, but even this may not be enough. Maybe two bricks will do, or a chain run from one handle across the lid to the other handle. Or, keep the trashcan in your garage.

No plates on the porch
In addition to raccoons, expect opossums, skunks, foxes, rodents, even Coyotes and others to visit your yard. They would love nothing more than a plate of your dinner leftovers placed on the porch for them. Resist the temptation. This puts them too close to humans. Wildlife occasionally carry diseases and they can be dangerous. Even mild-mannered, gentle opossums may feel forced to fight, if cornered. Wildlife can become pests through no fault of their own and in unpredictable ways.

Keep cats away
If you allow your cat outside, be aware that the danger to wildlife significantly increases. Cats, including the sweetest, most loving and well-fed domestic ones, kill millions of small animals every year. It isn’t maliciousness; it’s just what they do. Not only do their teeth kill, but their saliva does, too — it carries a bacteria, Pasteurella, that attacks an animal’s central nervous system. Any hapless creature that manages to escape from a cat’s mouth will probably die from the bacteria.

A bell on your cat’s collar won’t work. A cat’s slow hunting behavior is too smooth to ring the bell, until it’s too late for the prey. Even if it does ring, an animal doesn’t intuitively know to associate the sound with imminent danger. (Domestic cats that are allowed to go outdoors have shorter lives. Here are all the many good reasons why.)

Locate bird feeders strategically
If cats visit your yard, keep bird feeders away from shrubbery, overhanging tree limbs, decks and anywhere else a cat can hide in, under or upon, unless you’re willing to take extra precautions. For example, you can help safeguard birds at feeders by placing fencing that’s one or two feet tall just under the spread of nearby shrubs. This doesn’t prevent cats from lurking there, but it does stop them from pouncing forward onto a bird. Either the cat must lie in plain sight in front of the fencing, or behind it, which forces it to jump up and over. The sound of the foliage moving will alert the bird, and it also slows the cat down by a split second. That’s all the time a bird needs. You can apply the same strategy around ground-level birdbaths. 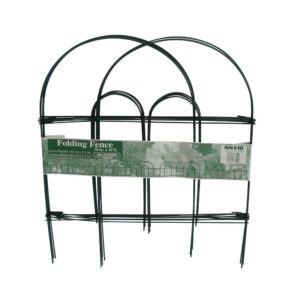 Birds are an important and entertaining addition to your wildlife habitat. It’s fun to draw them in close to windows for easy viewing. Consider, however, before hanging a bird feeder from the overhang of your house or on a window ledge — fallen seeds attract mice.

Warn birds away from your windows
Window glass is invisible to birds: Flying birds, watching ahead of themselves, see trees and shrubbery, or an open field, or clear blue sky, only to discover too late it’s a reflection of where they’re coming from, not where they’re going to. Millions fly full-bore into window glass. Half the birds who hit windows die. The experts at Allaboutbirds.com report that up to a billion birds die from window collisions each year. 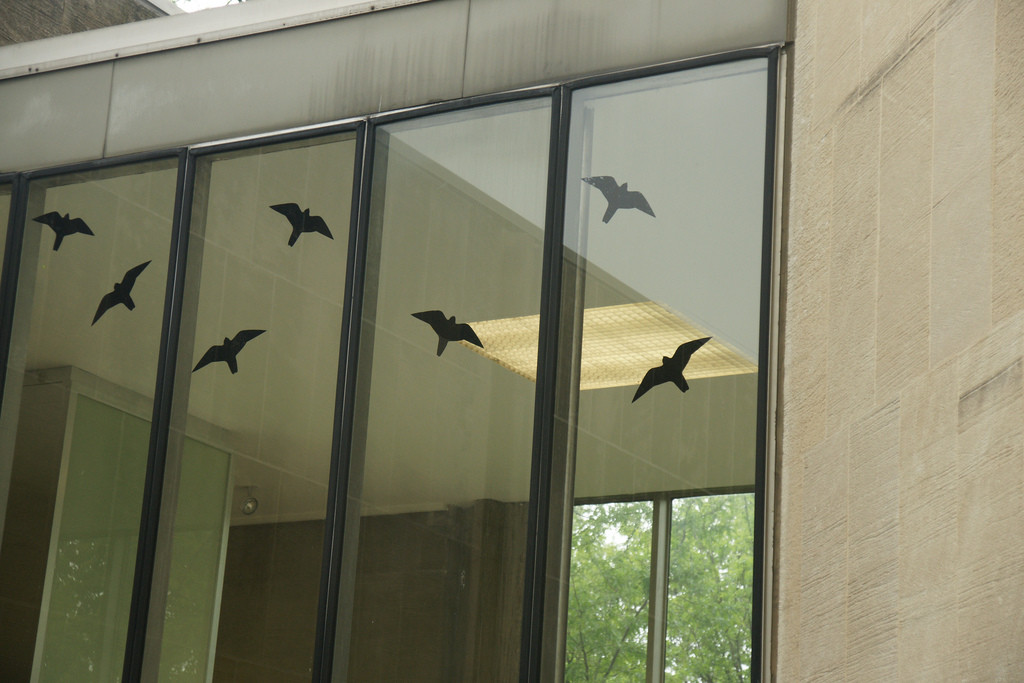 Decals on these windows should be placed closer together. (Romana Klee / Flickr; cc by-sa 2.0)
Don’t destroy beneficial and harmless insects
Almost all insects are beneficial or, at the very least, benign. If possible, try to identify an insect before deciding it should be destroyed. If possible, plant duplicate plants to which you can relocate bothersome caterpillars. It seems kind to move a caterpillar from a plant and place it carefully on the ground, rather than killing it. But, caterpillars feed on species-specific plants, so removing them from those usually results in their starvation. Most caterpillars we see are future butterflies and moths.

Pick up litter
Seemingly innocuous items can be dangerous to wildlife. Animals are known to stick their heads through plastic six-pack connectors while foraging, then be unable to remove them. Kite string and monofilament fishing line can become tangled around an animal, crippling it. Fishing hooks can embed in a foot or mouth. The ways that trash can torture and kill wildlife is limitless.

Cover window wells
Animals can fall into window wells, doomed to die there by a slow death of starvation or dehydration. Customized window well covers can be costly, but all home improvement stores carry inexpensive, ready-made, plastic covers. They’re  lightweight and can be pushed upward or easily broken in case of the need for emergency escape from inside, so they’re not a hazard for your family. Another option is to build a simple wood frame of 2 x 4’s or lattice and fasten window screening across the top.

Check before mowing or trimming trees
Walk your yard before mowing or rototilling to look for baby rabbits and ground-nesting birds, still in their nest. If you find some, keep a wide berth until the young ones have left. Look in bird and squirrel nests and in cavities before trimming trees. If you see nestlings, it’s only a matter of weeks or even days before the young ones will fledge and you can get back to your trimming.

Clean up spills
If oil gets on a bird’s feathers they lose their insulating properties, leading to hypothermia and death. Antifreeze is deadly, but attractive to many animals (including your family pets) because it has a sweet taste.

Don’t raise or keep wildlife
Wild animals don’t make good pets, they don’t like being pets, and in most states, it’s illegal.

Screen chimneys, vents and hidey-holes
Destruction of their habitat has forced wildlife to face hard challenges and one of them is finding suitable shelter in an environment of turfgrass, concrete and sparse plantings. Who can blame them for grabbing any reasonable offering?

Install chimney caps and vents to bar occupancy in fireplaces and attics by squirrels, birds, bats and raccoons. If you believe a critter is living under a shed or other outbuilding, just leave it be. Except for skunks, what does it matter? If the lodger is nocturnal, it’ll stay tucked in, snoozing during the day, or if it’s inclined to come out, it won’t while you’re in the yard.

Never seal a hole without first making sure it’s empty.

Dealing with pests
Pest problems usually can be controlled. But if a critter becomes a pest and nothing you do solves the problem, call in a licensed wildlife rehabilitator, a wildlife sanctuary or an experienced animal trapper who will humanely catch the animal and release it elsewhere. Call animal control only as a last resort — in most areas, it’s a death sentence, as they’re required to euthanize the animals they catch. How to humanely remove wildlife from people spaces

Teach children to respect animals
Teach your children that all wildlife holds a valuable place on earth, for purposes all their own with which we should not interfere, that it’s important to leave them in peace. Show and explain their value by together watching the activity of butterflies, bees, squirrels, birds and other wildlife you see. If an animal of any kind finds its way into your home, show your children how to usher it out humanely.

One mom and dad have been taking their three children on day trips to nature preserves since they were old enough to walk. They explore together, examine insects and discuss animals they see. At home, the children explore and learn about what’s living in their yard.