You are at: Home » birds-seasonal » The birds of the ‘Twelve Days of Christmas’ song

You know The Twelve Days of Christmas song by heart, don’t you? It’s a perennial Christmas favorite, especially to youngsters. Didn’t most of us learn the words in grade school?

Originally a chant or memory game,* The Twelve Days of Christmas was first published in 1780, in England, but it’s probably older than that and French in origin. Various versions have been recited and sung through the centuries.

The lyrics refer to the 12 days between Christmas and Epiphany. Depending on how it’s being calculated, the days begin on Christmas Eve, Christmas Day or the day after. It wasn’t put to music until the 1800s. The melody we sing today was written in 1909.

In addition to numerous energetic people in the song — pipers piping, lords-a-leaping, ladies dancing and maids-a-milking — there are seven birds. Have you ever wondered what species the songwriter(s) had in mind? Historians who’ve made a study of this agree on most or all of the following birds. Bet you’ll find yourself humming along as you read!

On the first day of Christmas, my true love gave to me:
A partridge in a pear tree

Partridges are in the pheasant family and native to Europe, Asia, Africa, and the Middle East. The bird of the first lyric is likely one of two strong possibilities.

The first is the Red-legged Partridge, Alectoris rufa, sometimes called the French Partridge. They’re native to France, Spain and Portugal, and have been introduced into England and Wales. They breed on rocky ground and farmlands. They’ll fly short distances, but prefer to run when alarmed. 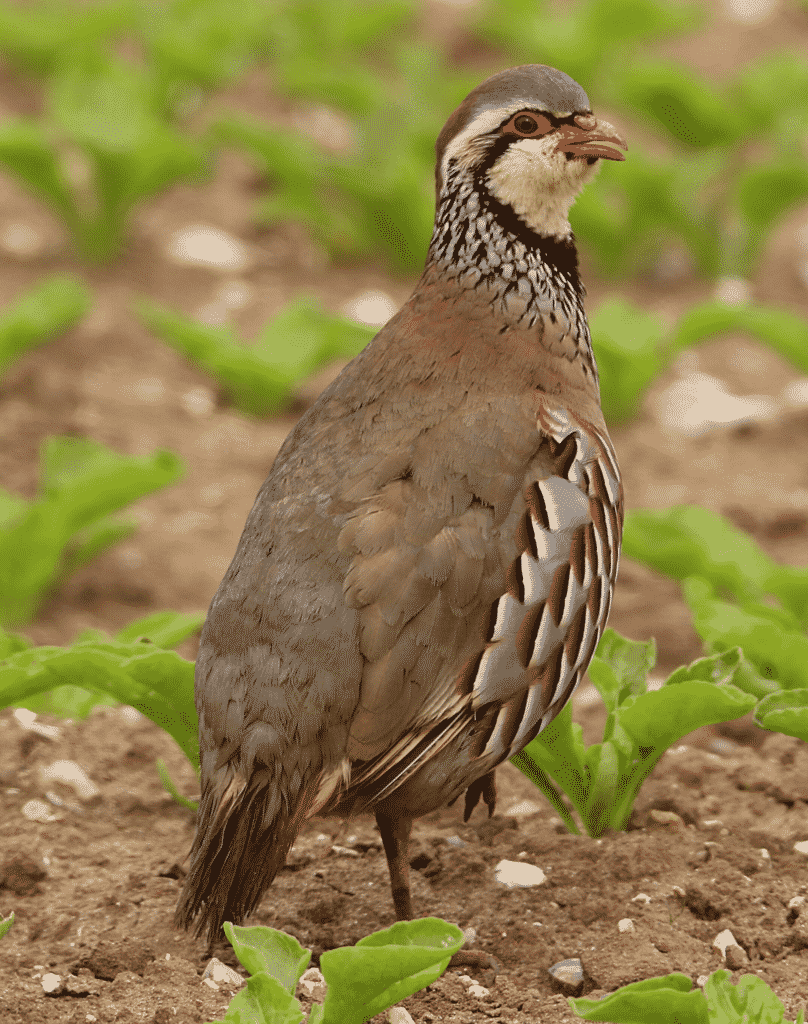 The second most likely is the Gray Partridge, a traditional game bird of Europe and Asia. Introduced into flat agricultural areas along the United States/Canada border they’re especially noted for their huge clutches—up to twenty-two eggs! 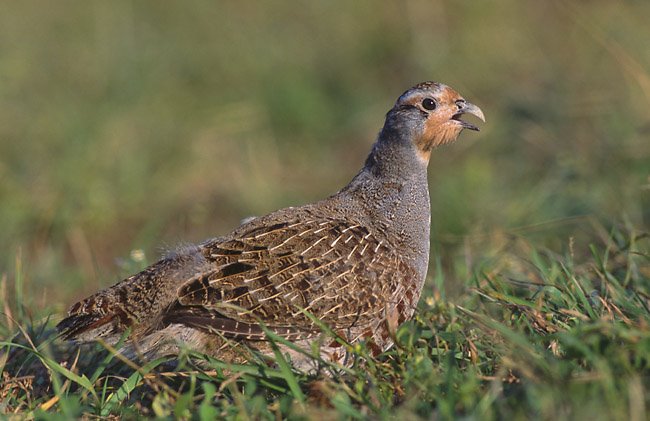 On the second day of Christmas, my true love gave to me:
Two turtle doves

The doves are probably European Turtle Doves, migrating birds of Europe, Turkey, and Africa. Timid and dainty, they live in open woodlands, occasionally visiting gardens. They’ve come to be symbols of devoted love because they form strong pair bonds. Their name comes from their song, a vibrating, deep “turrrr.” 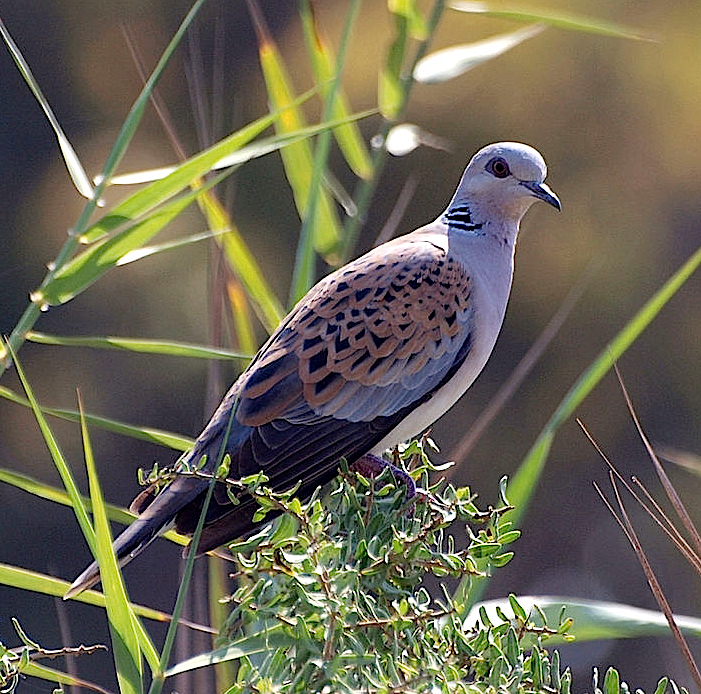 On the third day of Christmas, my true love gave to me:
Three French hens

The hens are probably a species of fancy chicken native to France. Three main possibilities date back several centuries:
The similar-looking Crèvecœur (kref-KURR) and the Houdan (oo-DAW), which are now raised mainly for show, and the La Flèche (La FLESH), a rare breed raised for show, and for meat in expensive French restaurants.

On the fourth day of Christmas, my true love gave to me:
Four calling birds

The calling birds are “colly” birds in the original version of the song. Colly (or collie) is from “colliery,” an Old English word for coal mines. It was also used when referring to blackbirds, as in “black like coal.”
The colly bird is most likely the Common Blackbird, also called the Eurasian Blackbird. They weren’t called blackbirds until 1486. Common Blackbirds have a musical song and are the national bird of Sweden. They inhabit Europe, Asia, Africa, Australia, and New Zealand. 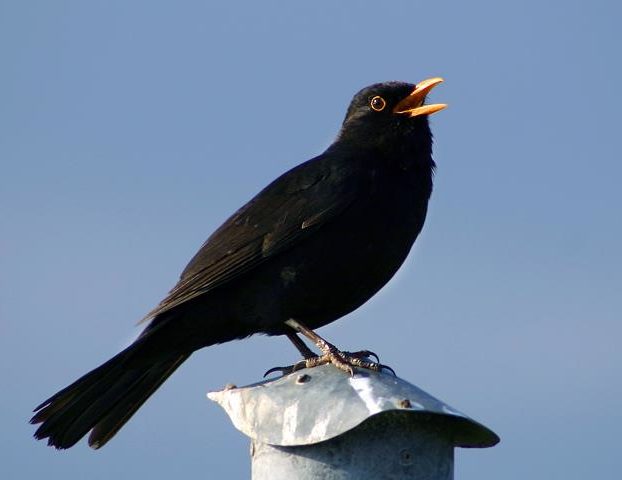 On the fifth day of Christmas, my true love gave to me:
Five golden rings

The rings are probably Ring-necked Pheasants. Native to China and East Asia, they’ve been introduced into other continents, including North America. They live on farmland, fields with brushy cover, in tall grasses, and woodland borders. Males take “harems” of numerous females and aggressively defend them from rivals. They can fly but typically run for cover. It’s the state bird of South Dakota. 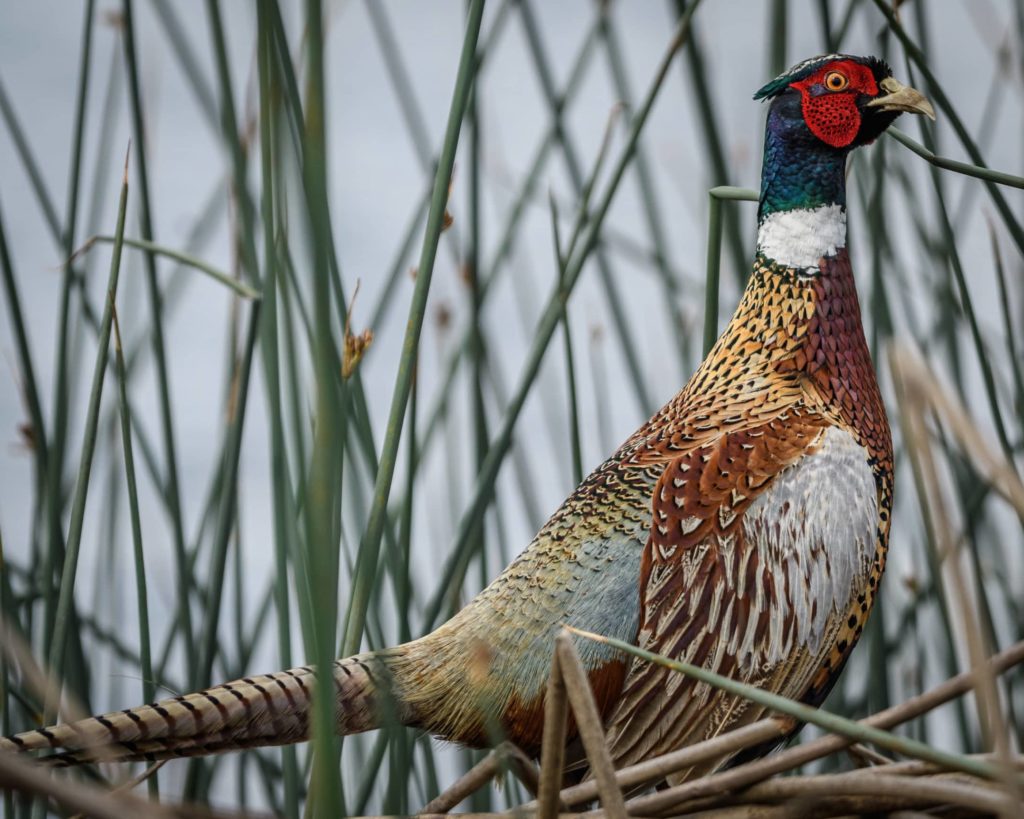 On the sixth day of Christmas, my true love gave to me:
Six geese-a-Laying

The Graylag Goose is the ancestor of all domesticated geese and the most likely candidate here. Wild populations inhabit wetlands in Europe, Asia, and China. Wild Graylag populations in the US are domestic geese that escaped. The “lag” part of their name is said to refer to their lagging behind because they migrate later than other geese. Their call is a loud “honk.”

On the seventh day of Christmas, my true love gave to me:
Seven swans a-swimming

Laws now protect the final bird in the song. But, swans once were a common meat at royal banquets and the Mute Swan is likely this lyric’s dish. The largest birds in the world and native to Europe, they’ve been introduced into the US. They’re named “Mute” because they’re less vocal than other swans. When they curve their neck, it looks graceful and elegant to us, but it’s actually a threat display. They are powerful birds that aggressively defend their nests. In the US, they out-compete the native Trumpeter Swan for food and are considered a threat in some areas. 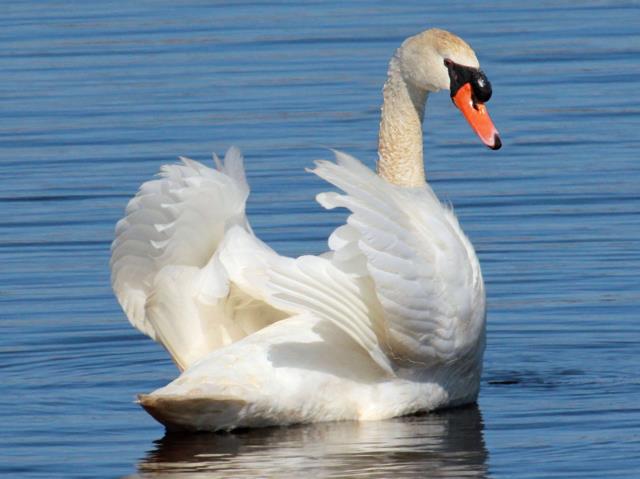 So, there you have it—a memorable song that acknowledges the importance of particular birds to people back in the 1700s and to this day is still sung at a certain time of the year!
*Wikipedia: “…memories-and-forfeits” game, in which a leader recited a verse, each of the players repeated the verse, the leader added another verse, and so on until one of the players made a mistake, with the player who erred having to pay a penalty, such as offering up a kiss or a sweet.”
Share. Twitter Facebook Google+ Pinterest LinkedIn Tumblr Email