You are at: Home » Insects » Think all moths are drab? These will change your mind!

Most moths are creatures of the night. We know they’re out there, but, nearly impossible to spot. Hidden by the dark, they’re also camouflaged by generally drab colors. When we do see moths, it’s in the glow of a porch light. In the daytime, moths usually rest out of sight, in crevices and under loose tree bark, for instance. But, sometimes, they’re in plain view, clinging to a camouflaging surface.

All moths are worth seeing, but some are REALLY worth seeing! Just take a look at the ones below. All of these moths can be found in urban areas wherever there’s habitat that suits them. So, make it a point to look closely at leaf and bark surfaces, or even the siding of your house; you’ll be surprised at how many moths you’ll see over time. 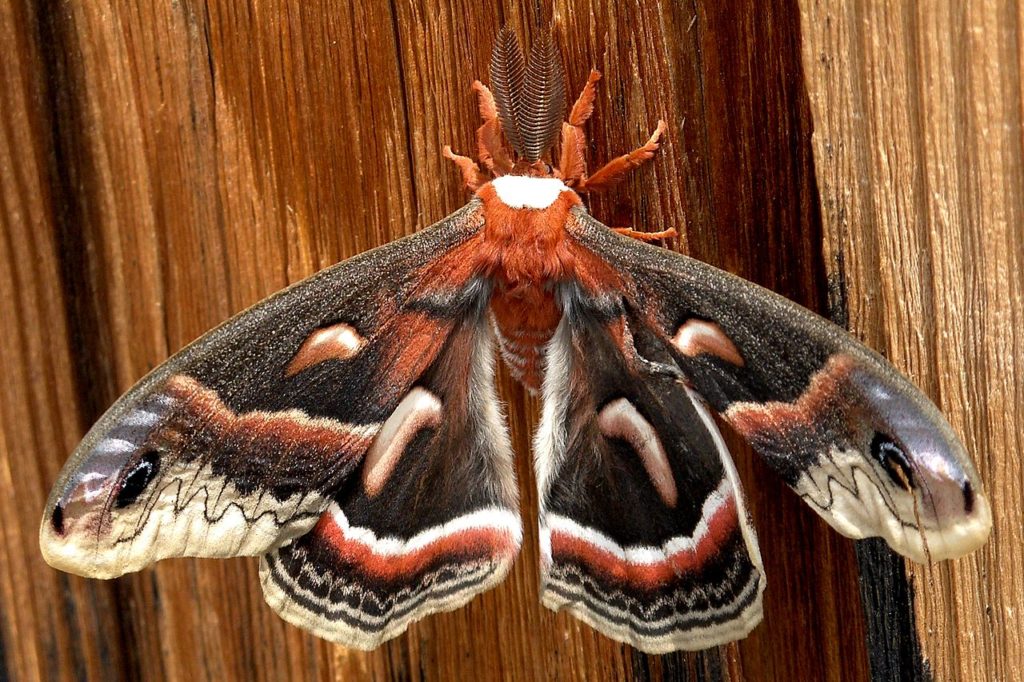 The Cecropia (see-KRO-pee-uh) is North America’s largest native moth. Wingspan: 6 inches (15.2 cm) or more. Range: east of the Rocky Mountains in the U.S., southern Canada. Habitat: hardwood forests, including wooded areas within cities. Flight: May to early-June and late-June to early-July in the Midwest, and from March to July elsewhere. Food: Adults don’t feed and live about two weeks. Their caterpillars feed on the leaves of maple, wild cherry, and plum, birch, willow, apple, alder, and dogwood. They feed in groups while young and become solitary as they grow older. (photo: John Sweeney / Wiki – cc by-sa 3.0)  Watch Cecropia Moth transform into a pupa 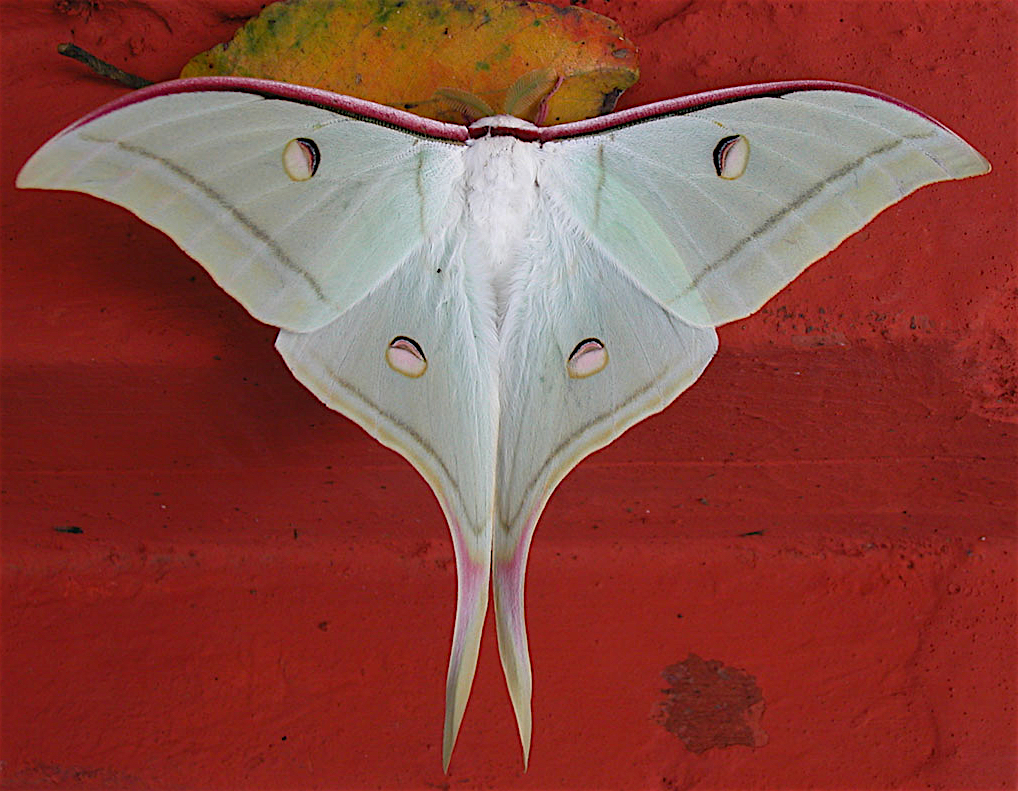 Endangered in some areas due to habitat destruction, as well as bright lights at night, which disturbs their mating cycles. Wingspan: 2.2 to 4.2 inches (5.6 to 10.6 cm). Habitat: In or near deciduous hardwood forests, including cities. Range: every state east of the Great Plains, and southern Canada. Flight: May to July in northern areas; March to September in southern areas, where they have up to three broods a year. Food: Adults don’t feed and live about one week. Their caterpillars are known to make a clicking sound with their mandibles when disturbed. They feed on white birch, persimmon, Sweet Gum, hickory, walnut, and sumac. (photo: Dinesh P. Pawar / Wiki – cc by-sa 3.0)   Timelapse Luna Moth emerging 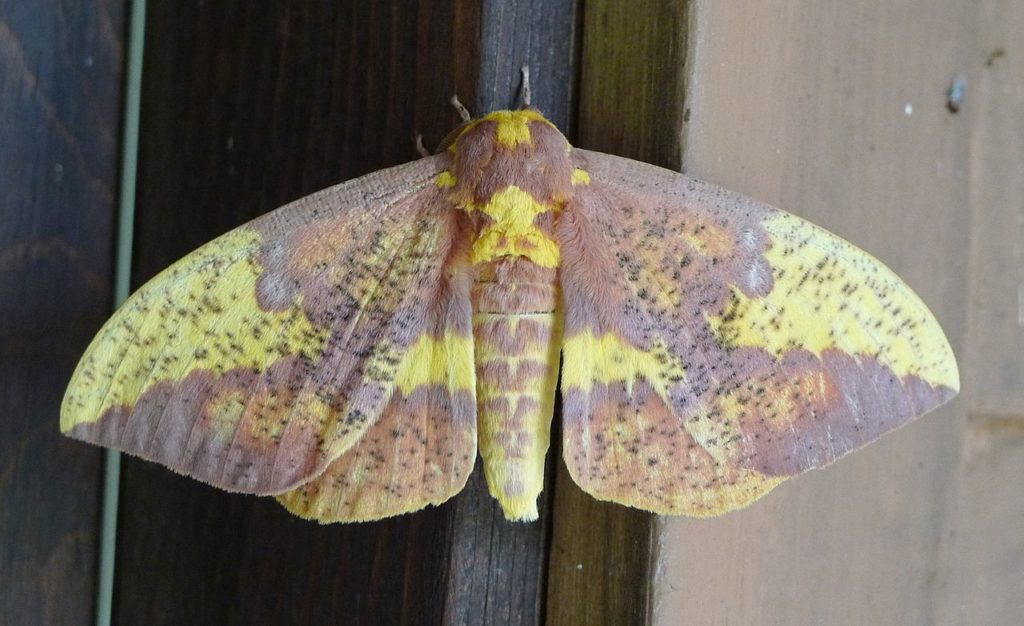 One of our largest moths. Those in the South generally show less yellow than those in the North.Wingspan: 3.1 to 6.9 inches (8 to 17.4 cm). Range: eastern half of the U.S., plus Ontario and Quebec. In decline in the northeastern U.S., possibly because of habitat fragmentation. Habitat: deciduous, mixed and evergreen forests, including wooded areas within cities. Flight: June to August in the north and April to October in the southern U.S. Food: Adults don’t feed and live about one week. Their caterpillars feed on leaves of pine, oak, box elder, elm, maple, walnut, birch, Sweetgum, Honeylocust, Bald Cypress, basswood, cedar. (photo: Nora lives / Wiki – cc by-sa 3.0) Imperial Moth video 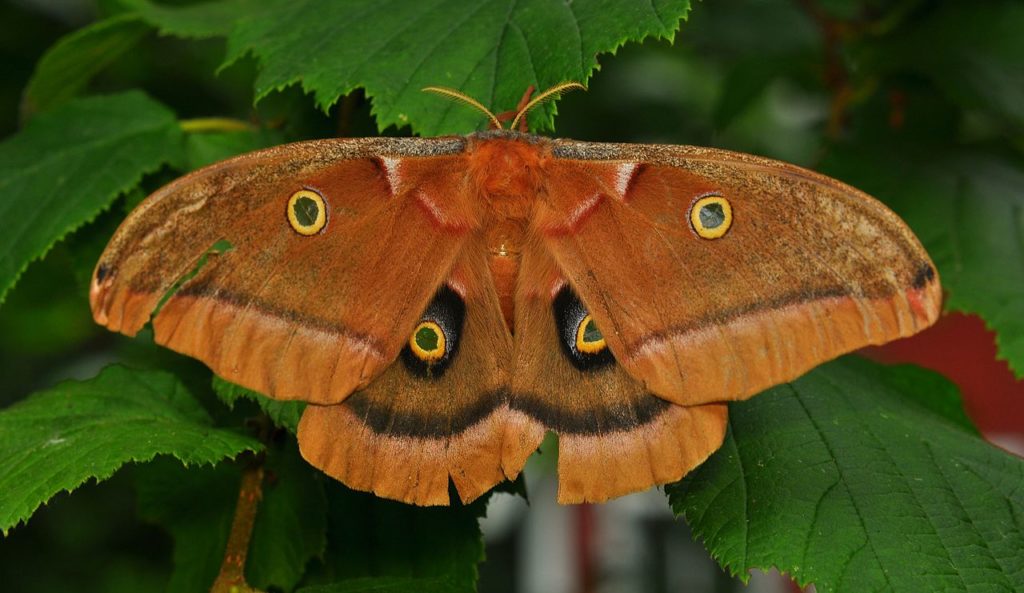 Named after Polyphemus (pol-uh–FEE-muss), the mythical one-eyed cyclops in Homer’s The Odyssey. Wingspan: 3.9 to 5.9 inches (10 to 15 cm). Range: all states in the continental U.S. and the Canadian provinces, except Newfoundland. Habitat: deciduous forests, orchards, some wetlands. Flight: April to May and July to August in the southern U.S. May to July in northern areas. Food: Adults don’t feed. Their caterpillars feed on leaves of a variety of trees and shrubs, including birch, grape, hickory, maple, oak, and willow. (photo by: The High Fin Sperm Whale / Wiki – cc by-sa 3.0) 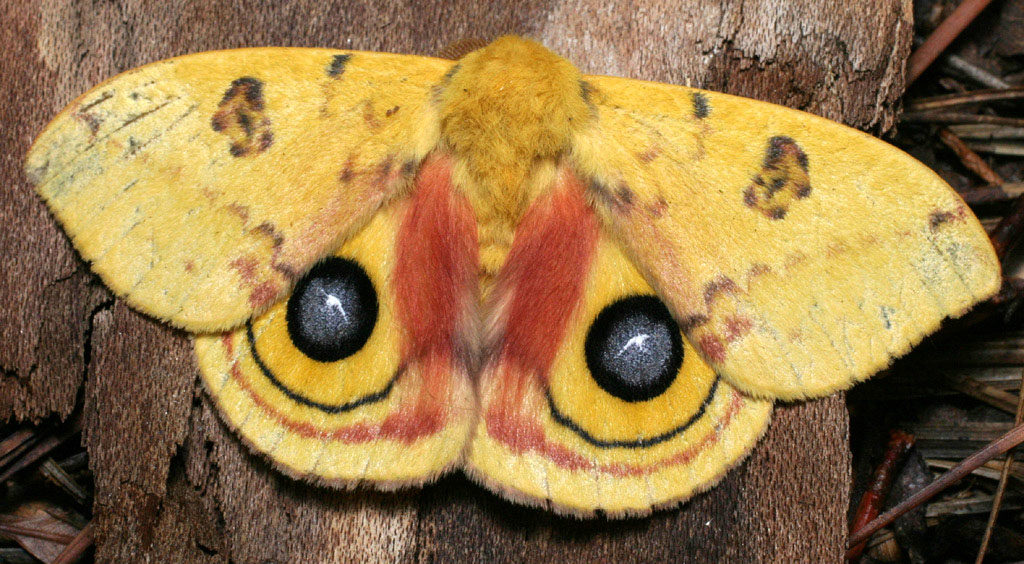 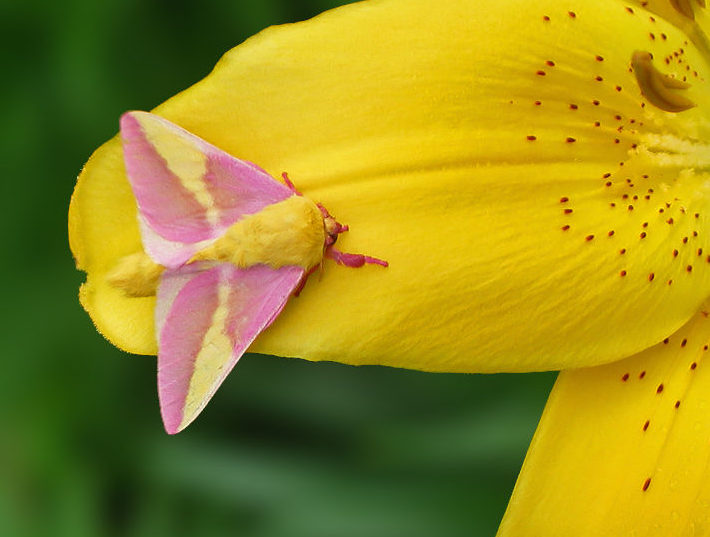 The Rosy Maple Moth’s species name, rubicunda, is Latin for “somewhat ruddy.” Wingspan: 1.25 to 2 inches (32 mm to 55 mm). Range: eastern half of North America, including most of Florida. Habitat: deciduous forests. Season: May to August in the north and April to September in the south, where they have two to three broods. Food: Adults don’t eat. Their caterpillars feed on leaves of maples, sycamore, beech, and oaks. (photo: Lynette Schimming / EOL – cc by-nc 3.0)   “Cutest insect in the world” video 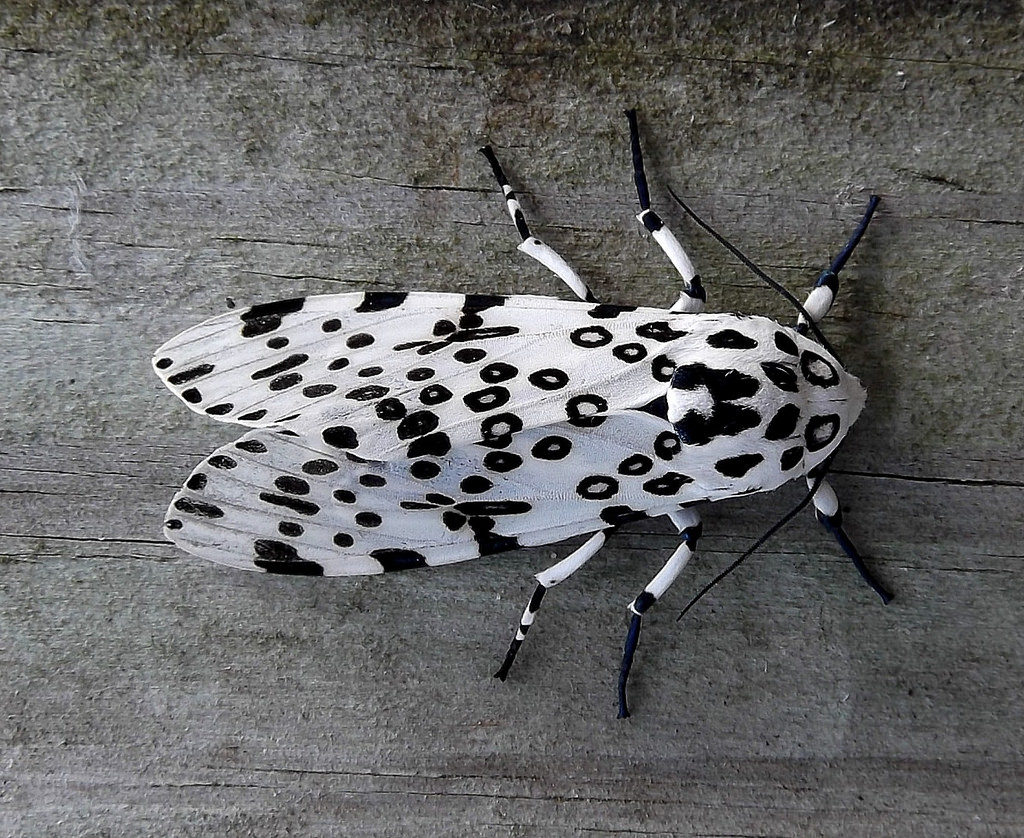 Also called the Eyed Tiger Moth, males and females mate for an unusually long time — more than 24 hours! Should a mating couple want to move from, say, a shady place into the sun, the female folds her legs and the male carries her under his body. Wingspan: 2.2 to 3.6 inches (5.7 to 9.1 cm). Range: southern Ontario, southern and eastern U.S., Mexico down to Columbia. Habitat: gardens, woodlands, farmlands. Season: March to November; one brood in the north and two or more in the south. Food: Adults don’t eat. Caterpillars feed on the leaves of broad-leaved plants, including cabbage, cherry, dandelion, maple, sunflower, willow, violets. (photo: Jay Sturner / Wiki – cc by 2.0) 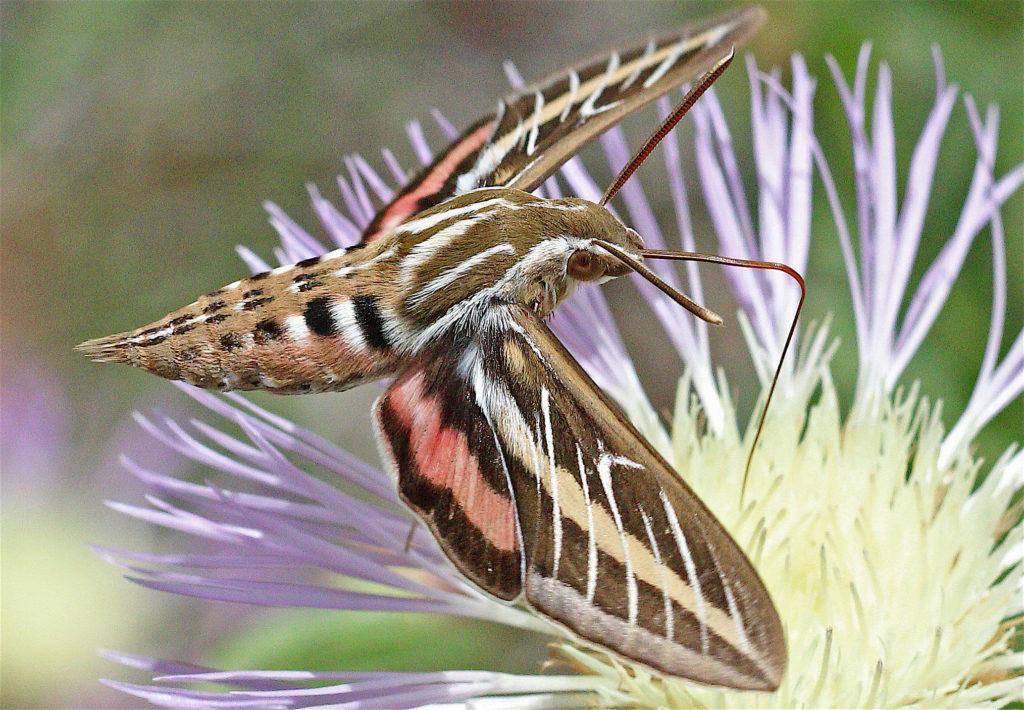 An exception to nighttime moths, the White-lined Sphinx comes out in the daytime, too. They’re sometimes called hummingbird moths because of their similarity in size and flying behavior to hummingbirds. Wingspan: 2 to 3 inches (5.1 to 7.6 cm). Range: throughout the U.S., southern Canada, south into Mexico. Habitat: open areas, gardens. Season: February to November. Food: Adults sip nectar from a variety of flowers. Caterpillars feed on the leaves of apple, grape, elm, tomato, purslane, evening primrose, others. (photo: Jerry Oldenettel / Flickr – cc by-nc-sa 3.0)