You are at: Home » Special topics » Yes! Animals have feelings!
Not so very long ago, the idea that animals have feelings was considered nonsense. Scientists accepted that animals experience fear and rage, but most stood in lockstep against the notion that there might be more than that.
Research in recent years has been proving them wrong. Pet owners have sensed all along that their dogs and cats have feelings, but there’s now irrefutable evidence that wildlife experience empathy, joy, grief and love. Even gratitude. Some hardliners still adamantly disagree, but they’re becoming outnumbered. It seems there’s more to animals than instinct and, as it turns out, it’s incidentally putting to rest the notion that humans are emotionally unique.
Anecdotal reports of animals’ emotions have been around for awhile, but a dozen years ago neurobiologists began discovering physical evidence, such as specific nerve cells associated with empathy in both humans and non-human primates. They’ve also found a brain cell that’s common to humans, other primates and whales which plays a part in empathy, intuition and feelings for others.
This shouldn’t surprise us, says author and scientist Jonathan Balcombe in his book, Pleasurable Kingdom,* since humans and other mammals, birds, reptiles, amphibians and fishes share many of the same physical characteristics, including a bony skeleton, nervous system, central brain, circulatory system and hormones. Plus, a sensory system that includes sight, smell, hearing, touch and taste. Balcombe and other scientists believe it stands to reason that humans and animals would react in similar ways.
Researchers don’t deny that animals react automatically to specific stimuli. Nor do they think animal emotions are necessarily equivalent to human emotions. But their research is revealing there’s mental and emotional complexity, deeper dimensions that give them more fulfilling lives than we ever imagined. Here’s a sampling of the emotions displayed by wildlife.
Joy and play
While play often serves the purpose of allowing wildlife to fine-tune skills they’ll need for survival, there’s no doubting it’s fun for them. In our own yards we might observe young squirrels playfully romping and wrestling. Anthropologist Mary Thurston tells of an adult male squirrel who pulls towels off patio chairs, then hops and twists until he’s completely covered. His behavior seems to be just for the joy of it because there’s no survival, mating or food behavior associated with it. 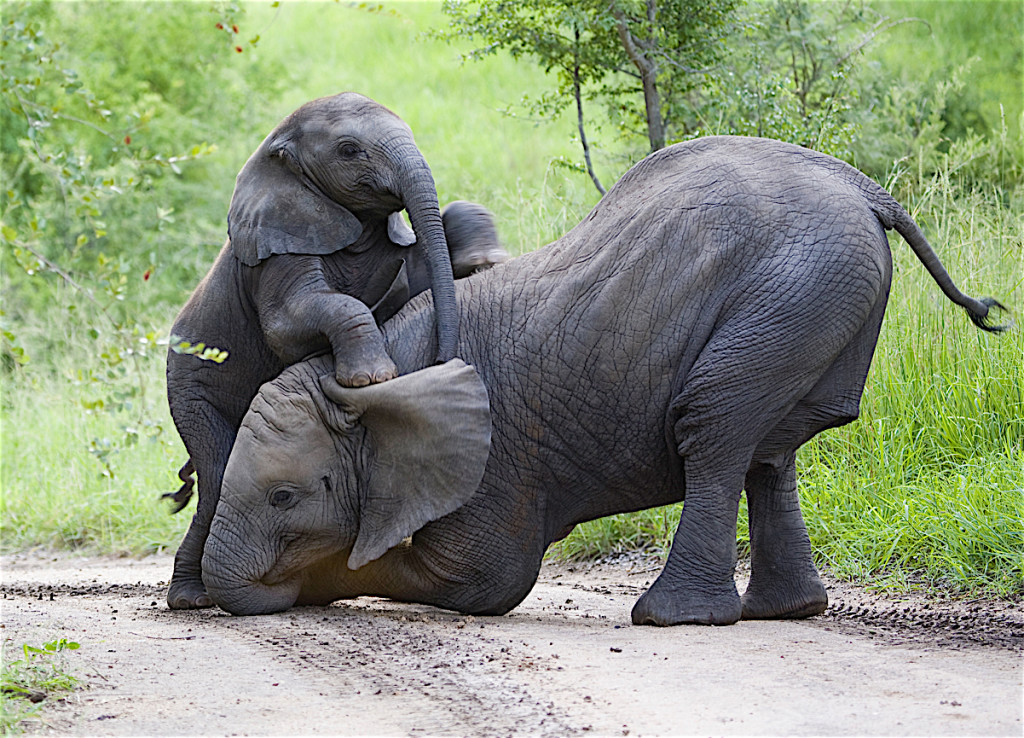 Numerous other observed instances offer convincing evidence that animals play and experience joy. Primatologist Jane Goodall tells of Marcus, a rescued chimp who loves to dance in heavy rainfall, swinging and swaying rhythmically. Junior, an orangutan at the St. Louis Zoo will clean up his cage in return for getting to play with a whistle. Researchers at Dian Fossey’s Rwandan research station report that young gorillas wrestle with their Labrador Retriever pets. When rats are playfully tickled, they squeal² with glee and show an increase in the production of dopamine, a chemical that’s associated with the pleasure center of their brain (in humans, too). The rats would run to the tickler whenever they sensed they were going to be tickled.

Otters like to use muddy, sloping embankments for “slippery slides” into water and to play-slide on ice in winter. They seem to be having fun at it. “Pigface,” a Nile softshell turtle who lives at the National Zoo in Washington, DC, plays with toys by pushing, pulling, shaking and nosing them around. A Wood Turtle has reportedly devised a fun activity for himself by repeatedly climbing up and sliding down a board into water.

Dolphins (who it has recently been discovered, call each other by name) blow hoop-shaped bubbles from their blow-holes and move them around and change their size, apparently just for fun. They also play tug-of-war with seaweed. Captive octopuses have been seen playing with plastic bottles and a Lego, passing them from tentacle to tentacle. Wild Reindeer eat hallucinogenic mushrooms for the “high” it gives them.

Love
We’ve all seen photos of chimpanzee mothers tenderly cradling their babies. And, Panda Bear mothers carefully holding and protecting a newborn no larger than a mouse. Or, two lovebirds, mated for life, who stay near each other day and night. But, other animals show the same “love” toward their kin.

A mare, upon seeing a daughter return after a two-year absence, whinnied and screamed from two fields away, and they reunited with a show of great joy. There’s an adult bull living in a herd of cows in Germany who goes his own way until midday, at which time he always goes to graze near his mother. 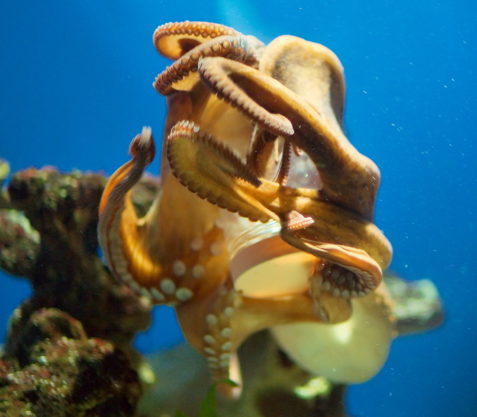 An octopus plays with a jar and its screw-on lid. (Matthias Kabel / Wiki)

There’s evidence that love, or something like it, is also felt within groups of whales, dolphins, hyenas, foxes and mongooses. Birds, too. A male Barn Swallow stayed with his mate after she struck a window and fell to the ground, seemingly dead. A few minutes later she revived and they flew away together. Greylag Geese mate for life and may spend dozens of years together. When one dies, the other appears to mourn, with sunken eyes and head held low. Canada Geese mate for life. When one of them dies, some mourn for the rest of their lives and never choose another mate. Many birds “nuzzle” each other and bring their bill tips together, as in a kiss.

Empathy
From time to time in the news we see a story about one species that “adopts” a different species, such as a dog raising an orphaned goat and a pig playing mother to a kitten. Recently, a French bulldog nursed a Bengal Tiger. This form of empathy, or at least the “mother” instinct, seems to be a rather common phenomenon.

Empathy shows up in other ways, too: Elephants slowing their walking pace to accommodate a disabled member of their group. Blue Jays delivering food to an old jay who was losing his eyesight. A mouse helping a weaker sibling to survive. In Alaska, one of two orphaned Grizzly Bears took salmon to her injured brother until he recovered.

Grief
One expert observer tells the story of watching four magpies as they tried to rouse and feed a fifth one who had been struck dead by a car. When that failed, they stood vigil over their dead companion for several seconds before flying away, suggesting a moment of grief. A Dunnock (small European bird) struck a window and died, and his two companions dragged his body to a shallow channel of water and repeatedly lifted his neck — were they friends trying to revive him? World’s smartest birds

Gorillas have been known to hold wakes. A llama owner reports one of her llamas stayed in his barn and wailed for two days following the death of an older companion. Cows sometimes bellow for days when their calves are taken from them.

Nearly all primate mothers react with intense grief if their infant dies, sometimes carrying the dead body for days or weeks. Grief is strongly felt by their young, too. Goodall tells the story of an 8-year-old chimpanzee, Gombe, whose mother died. He’d had an unusually close bond with his mother and was inconsolable. He was so depressed that he stopped eating. Within a few weeks, he curled up and died near the spot where his mother’s body had lain.

At Sea Life Park in Hawaii, when one of two dolphins who performed together died, her companion wouldn’t open his eyes for days. The park took pity on him and introduced a new young dolphin. He allowed her to swim with him, but for the first week, whichever side she was swimming on, he kept that eye closed, seemingly unable to bear another dolphin taking his friend’s place. The Elephant Sanctuary in Hohenwald, Tennessee, a refuge for African and Asian elephants, describes elephants suffering intense grief over the death of a companion.

Gratitude
In December 2005, a 45-foot-long female Humpback Whale got tangled in crab lines off the coast of California. Hundreds of yards of lines loaded with heavy weights wrapped around her body, tail and mouth. The lines kept pulling her down, making it difficult for her to keep her blowhole above water to breathe. Four divers spent an hour cutting the lines away from her body, including the one tangled around her mouth. A single sweep of her tail would have killed a diver, but the whale allowed them to help. After she was freed, she swam around the divers in what appeared to be “joyous circles” and then gently nuzzled each one separately before swimming away. The divers said they felt no fear and thought they were being thanked.

¹ Pleasurable Kingdom (Macmillan, 2006), the source of many of the accounts on this page.
² It takes ultrasonic equipment to hear their sounds.