You are at: Home » Mammals » About the Virginia Opossum, a yard’s ideal visitor

Be kind to Virginia Opossums. They have a wicked hiss and a mouthful of teeth they’ll flash when scared, but they’re actually sweet-tempered and don’t bite unless forced to. And, they never have rabies.

The Virginia Opossum is the ideal visitor to your yard. It’s quiet, doesn’t pick fights or leave foul odors. Nor does it dig or claw. Instead, it waddles in, eats a rodent, scarfs down some insects and snails, munches on fallen fruit, and cleans up any leftovers in the dog food bowl. Then it lumbers away. That’s it! They get unfairly blamed for damage done by other animals.

Opossums have existed since the Pliocene Epoch, two to five million years ago. They’ve endured the passage of time astonishingly well, and largely unchanged. How? Scientists aren’t sure, but think it’s because they’re masters of adaptation. Change their habitat, they adjust to a new one. Denied their usual food sources, they change their diet.

Opossums are marsupials, mammals that undergo the early part of their development in their mother’s womb and the rest of it in her pouch. Other marsupials include kangaroos, koalas, wombats, wallabies, Tasmanian Devils and…possums. That isn’t a misprint. Opossums aren’t possums! Except for being marsupials, possums are a group of entirely different animals, in the family Phalangeridae, that inhabit Australia and surrounding islands.

There are sixty opossum (oh-POSS-um) species in the world, most of which inhabit Mexico and Central America. Only one, the Virginia Opossum, inhabits the United States, where it’s found along the West Coast and throughout the eastern half of the country. It was first discovered by European colonists in, yes, Virginia.

The Virginia Opossum, Didelphis virginiana, is in the order Didelphimorphia and the family Didelphidae. Its genus name Didelphis is Ancient Greek for “double womb.” As you read on, you’ll see how appropriate that is. “Opossum,” comes from apasum, an Algonquin Indian word for “white animal.”

The Virginia Opossum is usually just called opossum or possum, so we’ll mostly do that here, in the spirit of convention, as well as space-saving and word flow. 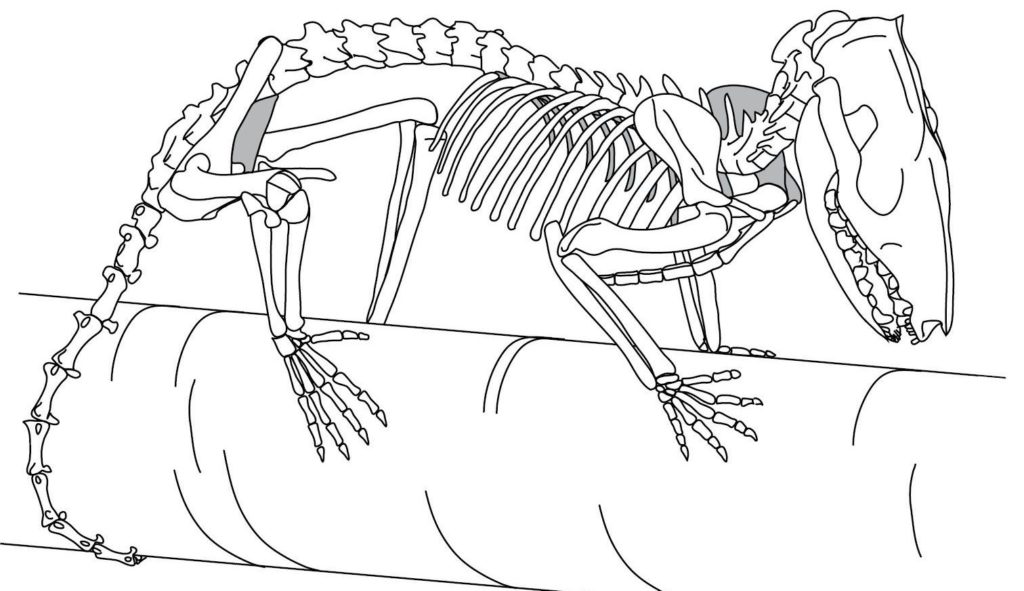 The opossum has a long, pointed face with black eyes, long whiskers and a distinctive pink nose. Its ears are hairless, black, and tipped or edged with white. White hair covers its face, and its body is a sparse, coarse grizzle of grayish and blackish hair. Its thin hair makes it susceptible to frostbite, so it doesn’t inhabit very cold regions.

It has 50 teeth, the most of any land mammal in the United States. When it opens its mouth, all those teeth are exposed and look truly menacing. Don’t let that fool you. Opossums are mild-mannered unless deliberately provoked, and sometimes not even then. They just want you to keep away. If you’re in doubt, watch this. 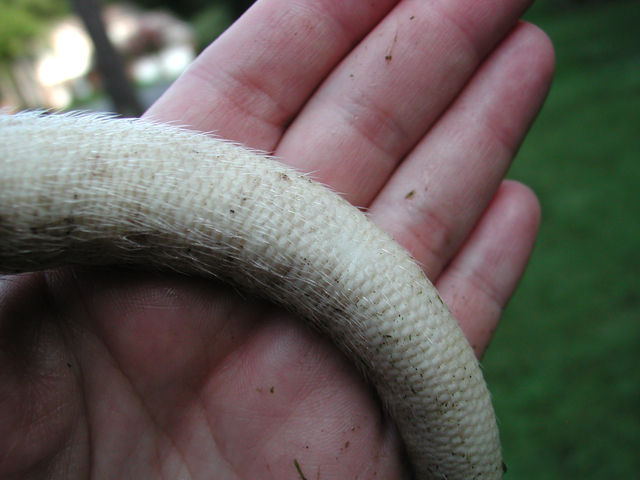 The tail is prehensile–hairless, scaly-looking, long and used for grasping things. You may have heard that opossums sleep while hanging by it, but that isn’t so–they’re too heavy to do that for very long. In fact, holding them that way is painful. 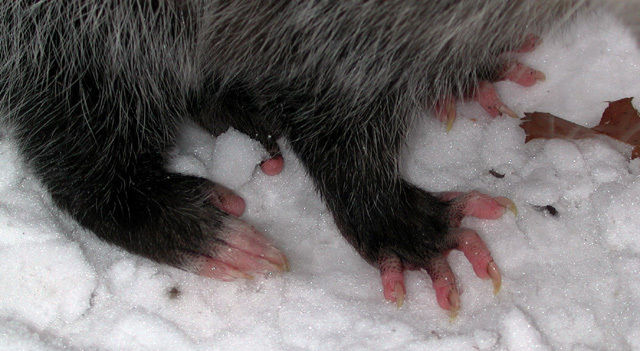 Their feet, which are bare on the bottom, have five hairless, dexterous toes (some experts call them fingers). Each of the hind feet has a thumb, called a hallux. All their toes are clawed except for the thumbs, which are used to grasp branches when climbing.

Opossums have no body odor. None. It’s because they lick themselves constantly. The licking, at least in part, has to do with regulation of their body temperature–they lack sweat glands and the evaporating saliva helps to cool them.

Opossums have a keen sense of touch. Their sense of smell is exceptional–they have 1,188 genes devoted to smell. (By comparison, humans have 396 olfactory genes.)1 Their eyesight is poor, however, and their senses of hearing and taste are rather weak, too.

Virginia Opossums make only a few distinct vocalizations. They hiss, snarl, and screech, and may do all of these when showing aggression. Clicking sounds also are made by males during mating behavior, by females around their young, and by babies. Some sources say mothers make a purring sound to their young. Listen to baby making clicking sounds.

Opossums have a reputation for being dim-witted because they move slowly and have a small brain size (five times smaller than a raccoon’s). However, researchers found in a series of tests that they’re better than dogs, cats and other animals at remembering the location of food hidden in a maze–only humans were superior. And, owners of young rescued, un-releasable wild opossums say they can be litter box- and leash-trained, love to be held and to snuggle, and will greet them at the door when they return home. They also claim that opossums come when their name is called.2

Opossums are solitary, except when mating or caring for young. They’re strictly nocturnal, except in winter when they’re sometimes active in the daytime on warm days.

Opossums try to seem very dangerous, by flashing their teeth and hissing — even young ones, like this. (rgrichie, iNaturalist / EOL; cc by-nc 4.0)

Opossums move in a sort of slow, swaying waddle, but if circumstances compel them, they can run at four miles per hour (6.4 kmh). But that’s equivalent to a fast walk for a human and won’t save them from most predators on a straightaway. So they aim for safe places. They may scale a tree (they’re good climbers), skinny into a woodpile or den, or dive into water (they’re able swimmers). Or they may just drop “dead.” 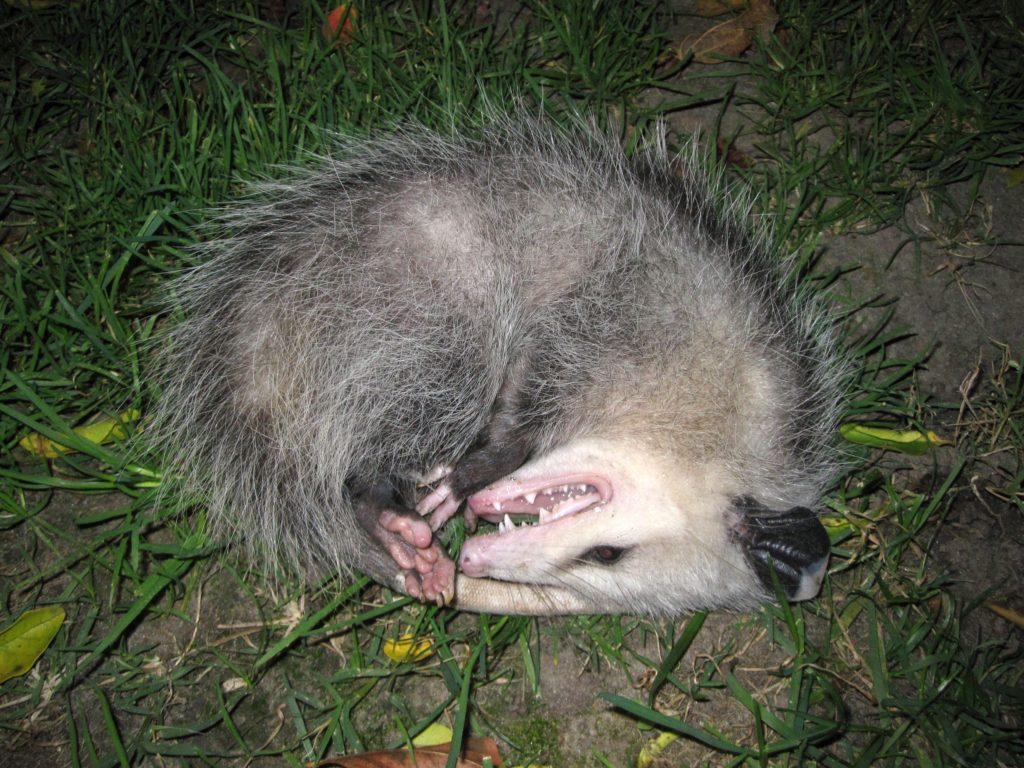 Opossums are well-known for pretending to be dead, or “playing possum,” but that isn’t playing for them. Feigning death is an involuntary, stress-induced nervous collapse, and it’s convincing:

They don’t always play dead. Instead, they may try to bluff their way out of trouble with a flash of teeth and scary hissing and snarling.

Females reach sexual maturity at about seven months of age and can breed about every 28 days year-round. Peak time is late-December through January (February in northern areas), and to a lesser extent from mid-May to early-July. After mating, males go their own way and don’t participate in raising the young. 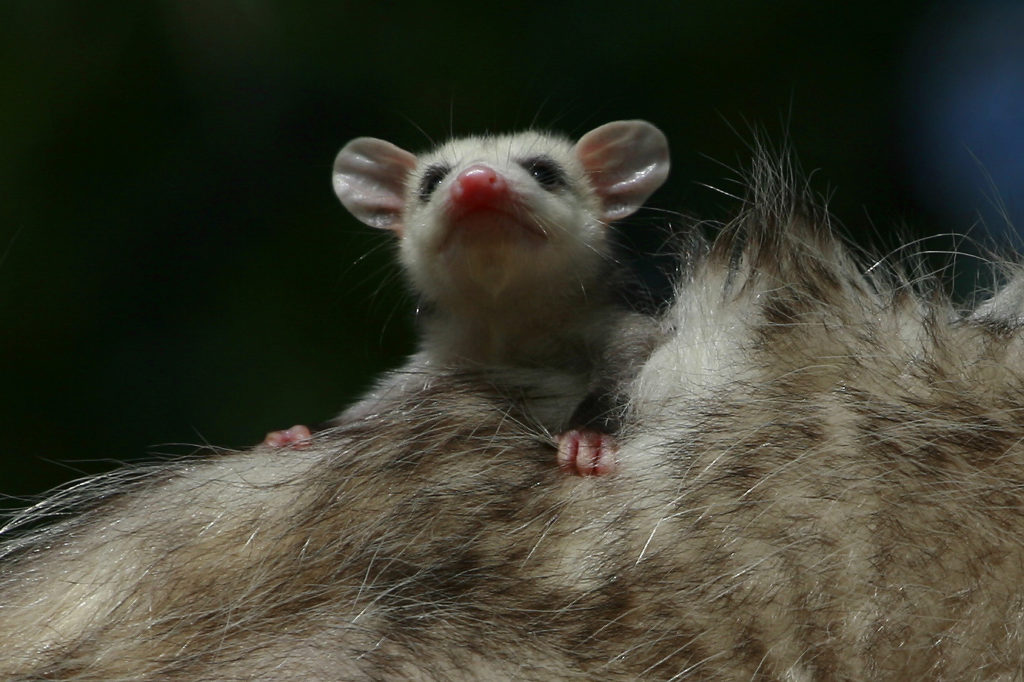 Females typically mate only once or twice a year, each time having eight to 12 young. Their reproductive system is bifid, meaning there are two sets of reproductive organs. (The male’s penis is also bifid). Some of the fetuses develop in the left uterus and the others in the right. Like cars merging into a single traffic lane, the fetuses are born one by one through a birth canal called the median vagina. Gestation lasts only 12 or 13 days. After that, the young continue their development in their mother’s pouch (marsupium).

But first, they must perform a harrowing journey to get there. The newborns are the size of a bee and weigh 1/200th of an ounce (0.1 g). Hairless and nearly transparent, they aren’t much more than embryos. Their mother prepares the way by licking a path through her hair. They follow this with a swimming motion, pulling themselves blindly up the slope of her belly to the pouch. The trek is only three or four inches long, but for these little guys, it’s monumental. Treacherous, too. A sudden move by their mother and they’ll fall off and perish. The weaker babies will not make it, regardless.

Those who make it to the fur-lined marsupium will suckle from one of 13 teats aligned there in a horseshoe arrangement. This is their lifeline to further physical development, and they hang on tightly. If there are more than 13, the extra ones will die.

Two months later and the size of a mouse, babies have begun to outgrow their warm, protected environment that’s now stretched nearly to its limit. Ever so cautiously, they peek out. Then they duck back inside. They peek out. They pull back inside. They’ll do this many times over the next couple of weeks until finally, they climb out–still clinging to their teat! They’ll stretch just as far as they possibly can, but won’t turn loose.

Eventually, in a tense moment of bravery, they open their mouths and let go. Then comes the second significant climb of their lives: up to their mother’s back (not her tail, contrary to myth), where they tightly grasp her hair with their toes and tail. If any fall off, they make hissing sounds, and their mother makes clicking sounds in response. If she’s unaware they’re gone, however, she’ll go on without them, and at this young age, they’ll perish. 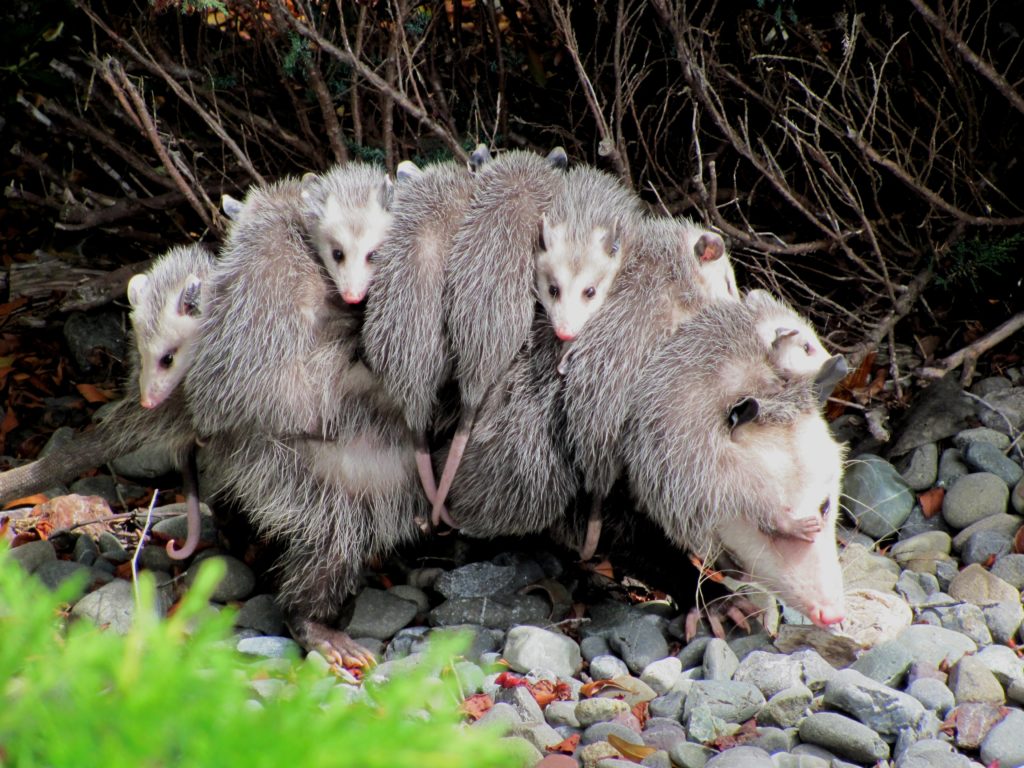 While hanging on, they travel widely in search of food, lodging, and other tricks of survival as adults. After a few weeks, they begin life on their own four feet by simply loosening their grip and dropping off. By now, they’re about 7–9 inches long (18–23 cm), excluding their tail. They share their mother’s den for a short time, then leave to establish their own territories.

Most Virginia Opossums have short lives. Those in the wild survive only a year or two: Many die because they don’t make it to their mother’s pouch; newly weaned and adult opossums are prey for numerous carnivores; and vehicles take a significant toll, too. In captivity, they live three to four years. It’s very rare, but there are reports of captive opossums living eight to 10 years.

Although well adapted to city life, their natural habitat is deciduous forests, but they also are found in farmlands, prairies and wet areas, such as marshes and streams.

You name it, they’ll eat it, and that’s probably a factor in their survival since prehistoric times. In addition to “people food” in the garbage can and pet foods left outdoors, opossums eat insects, fruits, grains, nuts, rodents, frogs, the eggs and young of other animals and carrion.

The opossums are solitary animals that generally nest alone. Females, however, will sometimes use daytime nests together.

Opossums’ feet are soft and delicate with small claws, not designed for digging. So, they look for existing nest sites that will keep them warm and safe, such as old burrows, drainage pipes, hollow logs, old squirrel nests, rock piles, woodpiles or under a porch. Even a chimney. They line nests with soft, dry materials, like grasses and dried leaves. They gather their nesting materials by mouth and then shove them under their body, where they loop their tail around them for transport.

Natural enemies of opossums include foxes, coyotes, bobcats, eagles, owls and other birds of prey; also dogs and cats. Otherwise, vehicles are their biggest enemy. It’s thought that opossums’ willingness to eat carrion draws them to roadkill and then, frequently, they become roadkill. Hunters and trappers, too, take a toll, but mostly by finding opossums while seeking other game.

The body temperature of opossums is 94 to 97 ºF (33 to 36 °C), which is too low for the rabies virus to survive. It’s nearly impossible for an opossum to catch rabies.

1For the curious: African Elephants have the best sense of smell, with 1,948 olfactory genes. See the Top-10 list
2 Wildlife cute, but not good pets
Fast facts: Rabbits and hares of N.A.
Provide cover for wildlife shelter, safety