You are at: Home » Mammals » Interesting facts about ground squirrels

Photos and interesting facts about ground squirrels, as adapted from WW’s Facebook posts 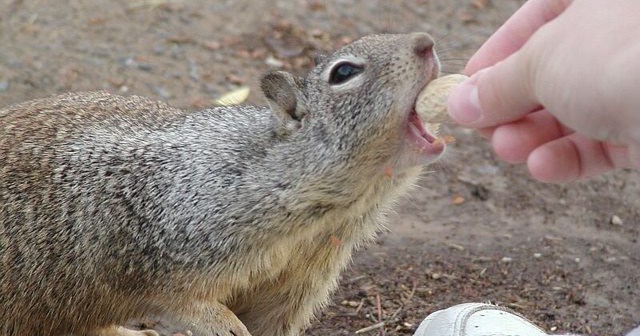 CALIFORNIA GROUND SQUIRRELS (Otospermophilus beecheyi) are related to prairie dogs and chipmunks. They’re common in the western U.S. and Baja, Calif. Active during the day, they’re popular with people because they can be readily tamed to approach for food. In some areas, it’s now prohibited, for fear someone may be bitten. They can climb, but prefer the ground. Like other rodents, when not being hand-fed by humans, they must gnaw to keep their front teeth filed down. They don’t gnaw that much on wood, but they do chew bark. Their favorite foods are dandelions, plantain, clover, garden veggies. 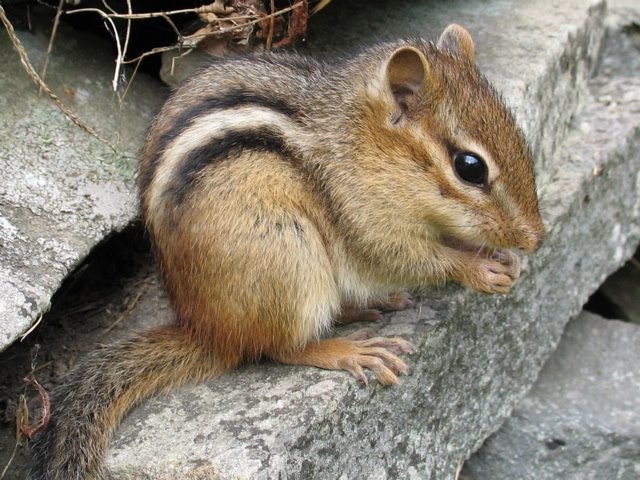 There are three species of CHIPMUNKS (Tamias) and about 20 subspecies. All but the Siberian Chipmunk live in N. America. Chipmunks are beneficial: They eat rodents, spread seeds and fungi spores, and eat grubs, other insects. Most people find them fun to watch and welcome them into their yards. But they can be destructive by munching on plants and flower bulbs and digging numerous tunnel entrances. 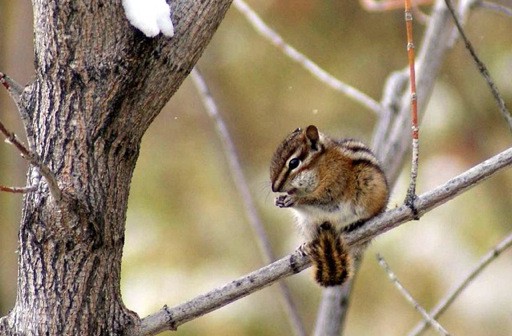 Chipmunks spend most of their time on the ground and live in underground burrows. Did you know they’re also good climbers? Shown here is the LEAST CHIPMUNK (Tamias minimus), happily perched in a tree. They inhabit the western half of the U.S.

Can you spot the entrance to the chipmunk burrow? Chipmunks carry away all excavated matter after they finish their tunnels, then camouflage the entrance. This one has used leaves, but other material may also be used, such as leaves, sticks, rocks.

The EASTERN CHIPMUNK (Tamias striatus) is one of the most widely distributed chipmunks in the U.S. They inhabit, as their name implies, the eastern half of the U.S. In winter, they hibernate, but not deeply and they sometimes leave their burrows on warm, sunny days. When hungry, they rely on a cache of food they stored ahead in a separate storage chamber in their burrow. Most emerge from hibernation in early March. photo of Eastern Chipmunk stuffing nuts into his cheek pockets.

“GOPHER” is a term for more than 100 species of burrowing rodents, a group comprised of ground squirrels, prairie dogs and pocket gophers. Gophers are sometimes considered pests — they dig tunnels, often hundreds of yards long, under croplands, parks, pretty landscapes and backyards. They also feed on veggies from gardens. But, they’re beneficial, too, turning over soil, aerating it, loosening compaction and improving water retention. They’re prey for owls, hawks, foxes, coyotes, skunks and others. This California Ground Squirrel (Otospermophilus beecheyi) is scolding the photographer. She probably has a burrow below the woodpile. 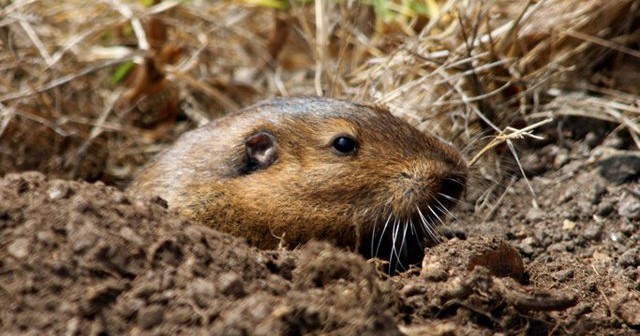 Gophers are equipped for life underground. They have small ears, small eyes and large, strong claws.Their front teeth are located in front of the mouth — a great convenience for keeping dirt out of their mouth while they dig. Their teeth are used to loosen soil and rocks as they tunnel. They have sensitive whiskers to help them feel their way in the dark. Their tail has sparse hair and is also sensitive to touch, enabling them to run backward almost as fast as forward.

GROUNDHOGS (Marmota monax), also called WOODCHUCKS, are related to squirrels and climb trees very well. They’re sleeping now. Deeply. One the few animals who go into true hibernation, their body temp may fall to 39-40 deg. F. In Oct., they dig a burrow below the frost line in a wooded or brushy area and move in. They emerge Mar.-Apr. (sooner in warmer areas). Woodchuck is from the Algonquin name for them, “wuchak. 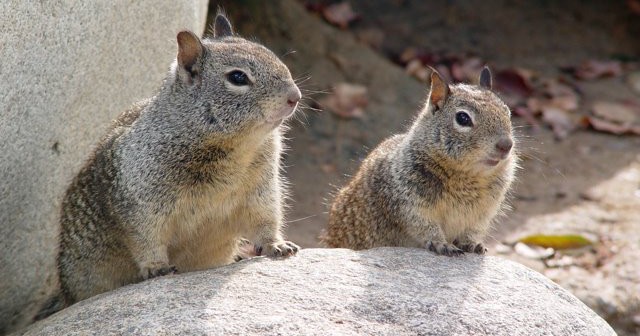 GROUND SQUIRRELS often live communally in complex burrows 2 – 4 ft. deep and up to 30+ ft. long, with each individual typically having a separate entrance. Burrows are used for hiding, resting, rearing young and storing food. For hibernating, too, in areas where winter is severe. Their tunnels and mounds can be a hazard to humans, livestock, plants and even buildings.

GROUND SQUIRRELS are on the list of many farmers and ranchers for eradication because of their tunneling and foraging. Researchers, however, believe they play an important role in controlling insect populations, seed dispersal, soil aeration and providing habitat for other animals with their abandoned burrows. They’re prey for hawks, foxes, weasels and rattlesnakes. Females may try to fool rattlesnakes by chewing up shed snakeskin and licking it onto themselves and their pups to obscure their own scent. A research study shows this does seem to fool the rattlers. photo of ground squirrel carrying grasses for nesting or food.

GROUND SQUIRRELS are also called WOODCHUCKS. You’ve heard this old tongue-twister: “How much wood would a  chuck if a woodchuck could chuck wood?” It’s said in fun, but it seems there’s an answer: Cornell Univ. says a wildlife biologist measured the inside volume of a woodchuck burrow and estimated that 700 lbs. of dirt had been chucked out of it. He concluded that’s how much wood a woodchuck would chuck if he was chucking wood.

NORTH AMERICAN PORCUPINES (Erethizon dorsatum) predominantly inhabit forests, but also shrublands, in the western and northern U.S. and Alaska, as well as a few eastern states and Canada. They’re mainly nocturnal and loners, but may share a den in winter. They don’t hibernate, but may stay in the den during bad weather. Dens are in hollow logs, tree cavities, caves, rock piles. “Porcupine” comes from Middle French for “spined pig.” Pig isn’t a suitable name, based on what we know today — they aren’t related to pigs. But “spined” is all too appropriate, isn’t it? They’re good tree climbers, but sometimes fall and get impaled on their own spines (also called quills). Beneath their quills is an undercoat of fur next to their skin, for warmth. Covering that are guard hairs.

Quills are modified hairs — as many as 30,000 of them — hollow, sharp, barbed, up to 3 in. long and hard to remove if you get stuck. They aren’t thrown like darts, but dislodge easily. Quills cover their body, except for the stomach and face, and are kept flattened unless needed. Porcupines are shy and non-aggressive, but when threatened, they turn their back and raise their quills and slap their attackers with their tail. Needless to say, they have few predators! 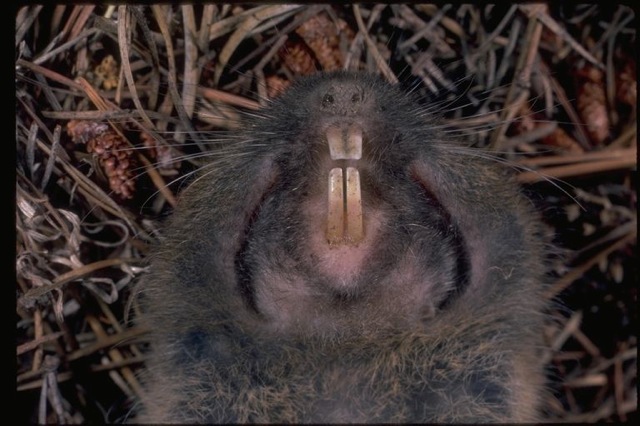 POCKET GOPHERS are a group of several species of burrowing rodents named for their large cheek pouches. The “pockets” are fur-lined and can be turned inside out. The gophers stuff them with food for transporting back to their burrows. These animals are “larder-hoarders.” That means they store food at a single location — sometimes huge amounts — to eat when food is less plentiful aboveground. By comparison, tree squirrels are “scatter-hoarders,” who hide their food in many different places. They’re found throughout N. America and south to C. America. Most have brown fur that matches their habitat. If these guys move into your yard, you’ll know it! They leave mounds of dirt in their wake. 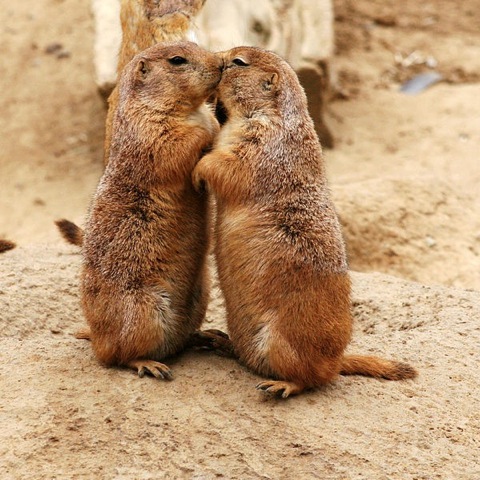 PRAIRIE DOGS inhabit the Great Plains and Mexico. Very social, they live in family groups called coteries (COAT-er-eez) which usually contain an adult male, 1 or 2 adult females and their young offspring. The coteries are grouped into wards (neighborhoods). Several wards make up a colony or town. The animals often greet one another by touching each other’s teeth, which gives the appearance of kissing.

BLACK-TAILED PRAIRIE DOGS (Cynomys ludovicianus) have complex calls to warn others about predators: what they are, how big, how fast they’re approaching. Prof. Con Slobodchikoff has done extensive sound analysis of their calls and says the animals describe a human walking through their town essentially like this: “Here comes the tall human in the blue (shirt)” or “Here comes the short human in the yellow.

PRAIRIE DOGS were named by early settlers, who thought their calls sounded something like barking dogs. Habitat destruction by farmers and urban development, as well as routine poisoning and shooting by ranchers have reduced their population by 95 percent. They once numbered in the hundreds of millions and were possibly the most abundant mammal in North America.