You are at: Home » Birds-features » ‘I am Orange Band,’ the last Dusky Seaside Sparrow

The following is an excerpt from Old songs in a New Cafe, by Robert James Waller, Grand Central Publishing, 1995. 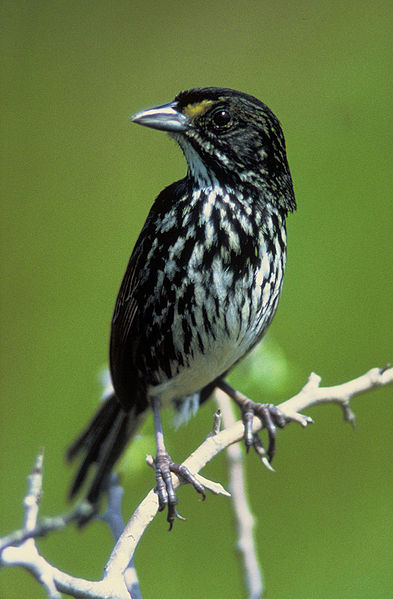 Orange Band was “…the last member of the rarest species known to us. He became blind in one eye, became old for a sparrow, and yet he persisted as if he knew his sole task was to sustain the bloodline as long as possible. I wondered if he felt sorrow or excruciating panic at the thought of his oneness. On June 18, 1987, a Washington Post headline said ‘Goodby Dusky Seaside Sparrow.’ Orange Band, blind in one eye, old and alone, was gone. But the day Orange Band died there was a faint sound out there in the universe, hardly noticeable unless you were expecting it and listening. It was a small cry, the last one, that arched upward from a cage in Florida. If you were listening closely though, you could hear it. ‘I am zero.’ Extinct. The sound of the word is like the single blow of a hammer on cold steel. And, each day, the hammer falls again as another species becomes extinct due to human activity.”

But we press on. With highways and toxic waste and all-terrain vehicles and acid rain and pesticides and the straightening of pretty creeks to gain an extra acre or two on which to grow surplus crops. In the name of progress and something called “development”, we press on, though we seem reluctant to define exactly what it is we seek. That definition, you see, likely is too frightening to contemplate, for the answer along our present course might be nothing other than “more”. And each day, the hammer falls again. And, each day, another small cry arches upward, slowly and forever, it arches upward. And sometimes I sit with my back against a granite ledge near a river in a distant twilight-colored blue, and say, “I am Orange Band.” More details about what happened to Dusky Seaside Sparrows are on this page.