You are at: Home » Birds » These woodpeckers store their food, and defend it, too!

Three woodpecker species in the United States are noted for storing their food and protecting their stash. Here they are.

Red-headed Woodpeckers (Melanerpes erythrocephalus) store and protect leftover food in tree crevices and are the only woodpeckers that cover it up (usually with bits of wood). Their main foods are acorns and beechnuts. But they also hammer into wood with their beaks to find insects, forage for them on the ground, and catch them in mid-air. Some insects, especially grasshoppers, are stored alive in crevices so tight they can’t escape. 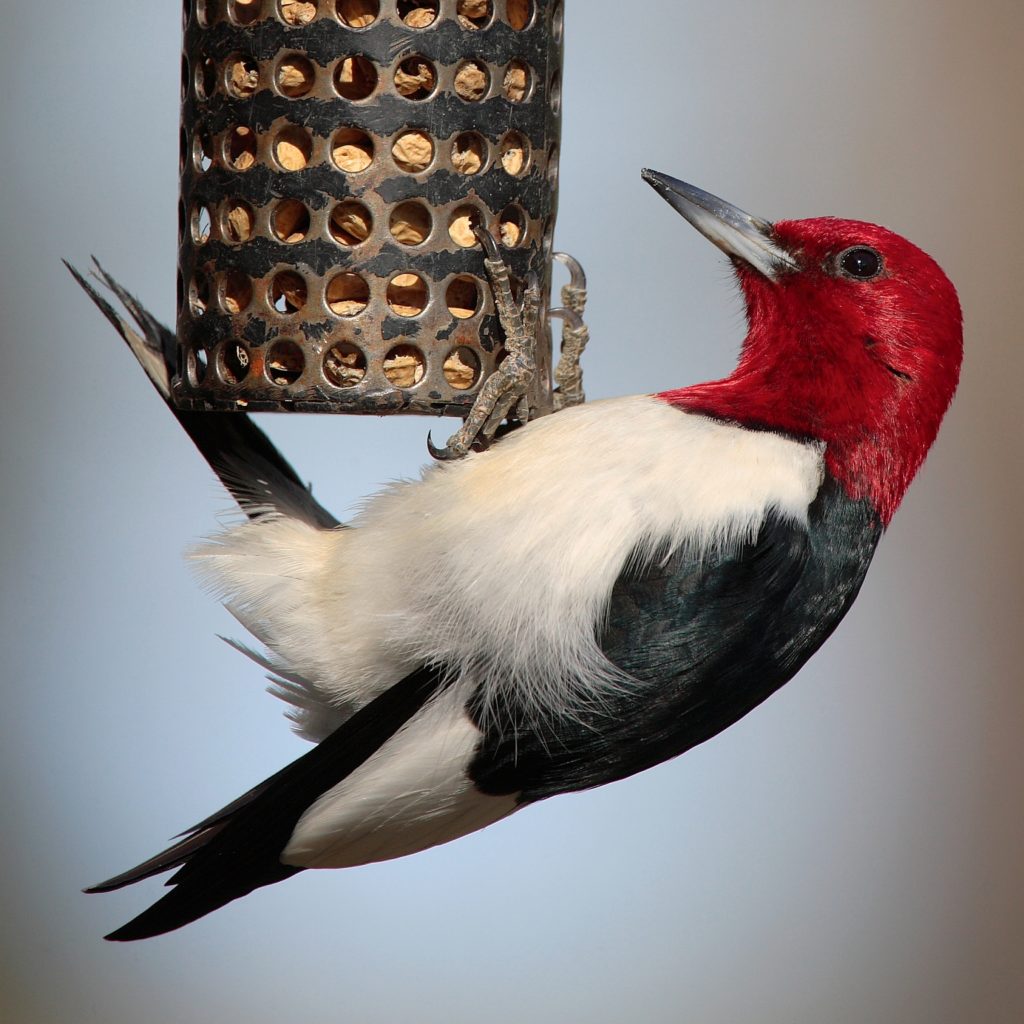 They fiercely defend their territory and use bobbing or bowing displays to express aggression. They may also remove or puncture eggs of other bird species and destroy nests.

Red-headed Woodpeckers are birds of pine and other open forests, tree rows, standing timber swamps and other wetlands in the eastern two-thirds of the U.S. and southern Canada. Those living in the more northern and western parts of their range migrate short distances south in winter. Their population has declined dramatically in the past 50 years due to habitat loss and changes to their food supply.

Uncommon at feeders in the summer, these striking birds may sometimes visit them in the winter, especially if suet is available.

Red-bellied Woodpeckers (Melanerpes carolinus) are named for a red belly that’s barely noticeable. Their orangish-red head and striped beak are what catch the eye. They typically store food in tree cracks and fenceposts. These birds differ from other woodpeckers by their habit of foraging mostly on the ground, rather than in trees or in flight, and will even dig with their beaks to find arthropods. Fruits, nuts, and seeds are also included in their diet. 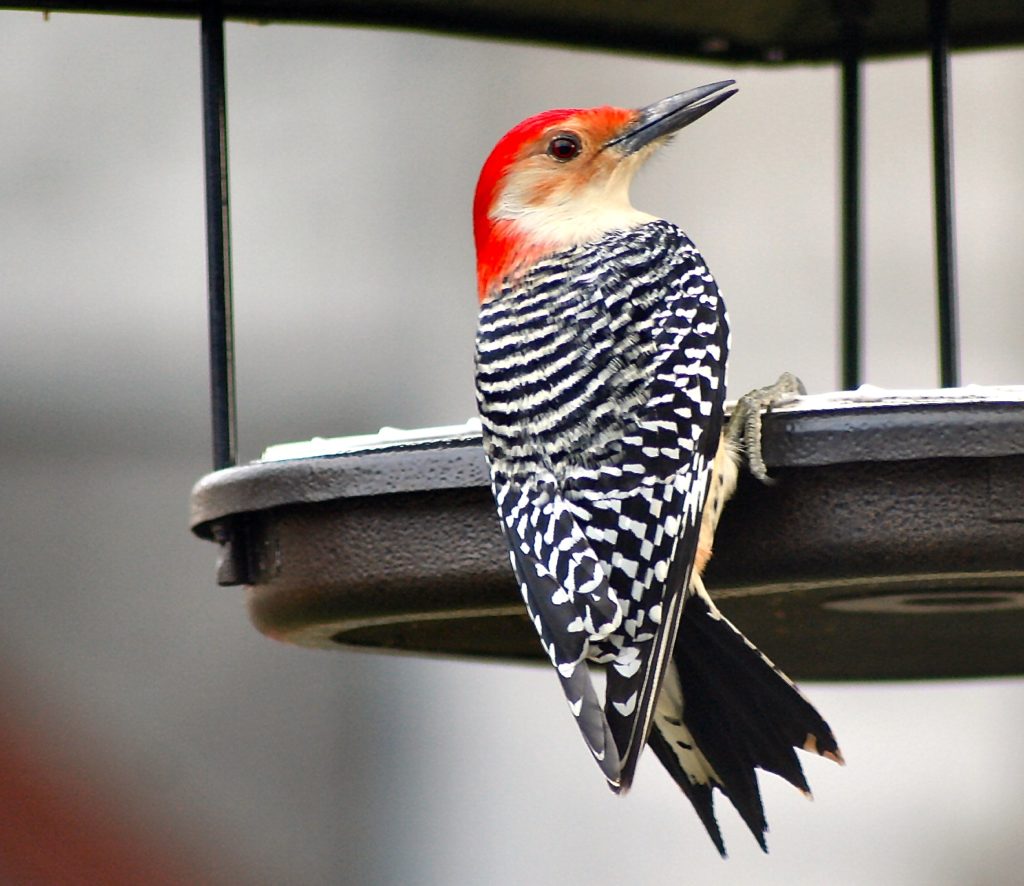 They aggressively defend their nestlings from predators. An observer reports that one hapless flying squirrel made the mistake of roosting in a separate cavity in the same tree and was repeatedly thrown off the tree by a Red-bellied Woodpecker!

These birds are non-migratory inhabitants of humid pine or mixed forests. They’re the most abundant woodpeckers in the southeastern U.S., but less common in the northern half of their range. Comfortable in urban settings with suitable woodlands, they’ll visit feeders for suet, peanuts, and sometimes sunflower seeds.

If you have large dead trees in your yard, they might excavate a nest hole there. They also excavate shallower cavities for roosting. They like to “drum” on hollow trees, as well as guttering and metal roofs. Their population appears to have grown in recent years because they’ve been adaptable to different types of forests and environments. You can tell just from their name what Acorn Woodpeckers (Melanerpes formicivorus) like to eat. In fact, they like acorns so much they collect what they don’t eat and store them in trees. Called a granary, a single tree may hold up to 50,000 acorns! Each one fits tightly into a hole. As they dry and shrink, the woodpeckers move the nuts to smaller holes. It’s a busy job! Not only that, but the acorns are visible and must be defended from scrub jays and others, so there’s always a woodpecker standing guard.

The birds may also use other places that suit them, such as crevices and cracks in buildings and telephone poles. 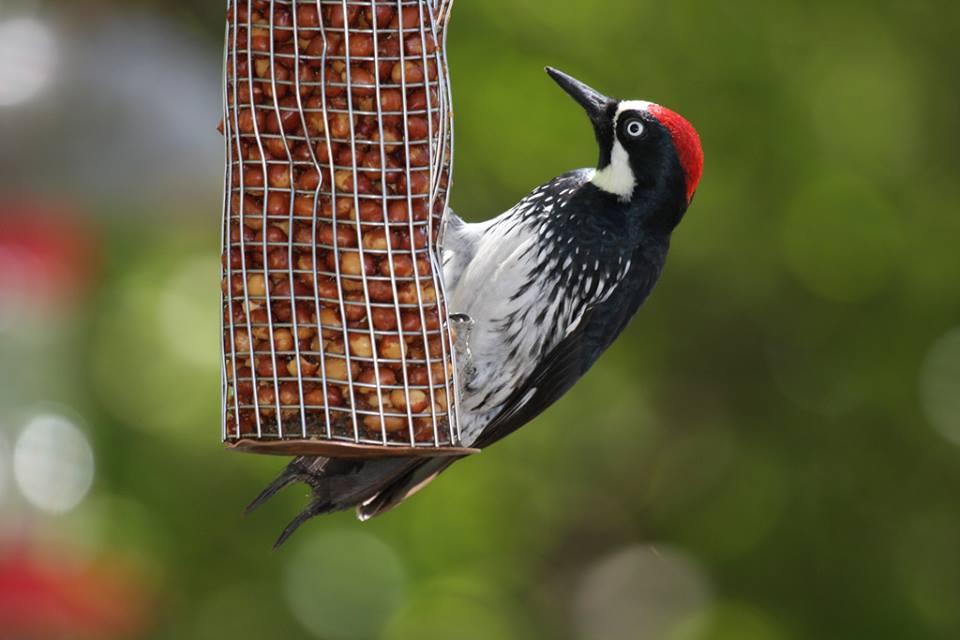 Although acorns are their main dish, the birds eat other things, too: sap, fruit, flower nectar, lizards and other small animals, and especially insects, which they sometimes store in cracks for eating later. They visit feeders for nuts, seeds, and suet. If they find your wood siding to their liking and start making holes in it, they can be hard to discourage. 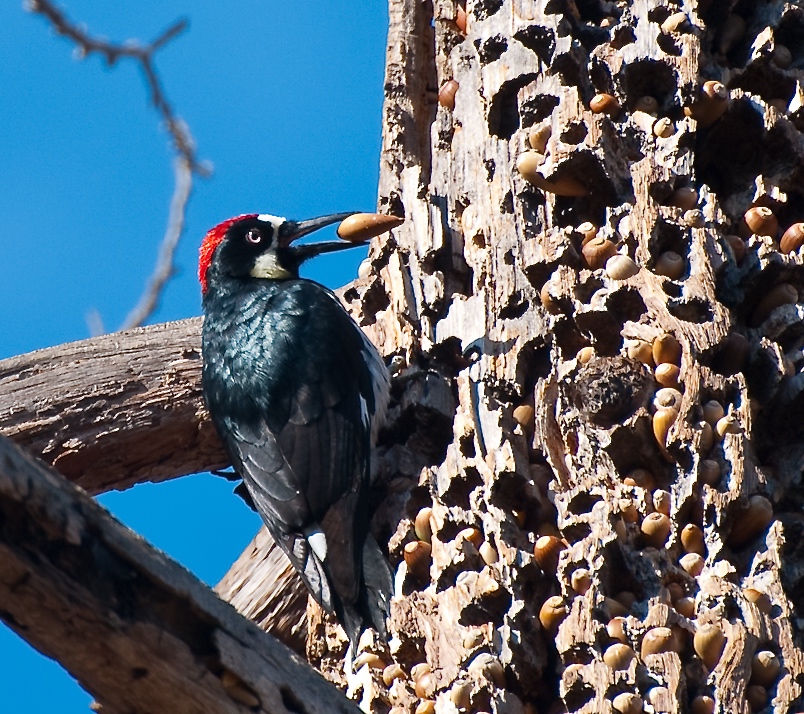 Common inhabitants of oak and mixed-oak forests on slopes and mountains of the southwestern U.S., West Coast and south to Colombia, they rarely migrate except in areas with large seasonal fluctuations of insect populations. They’re highly social and live year-round in groups. Their population seems to be stable, but they face threats from habitat loss and degradation.  All about birds