You are at: Home » Insects » In your yard: jumping bristletails

They live in your yard, but you may have never heard of them. So, what might be the most important things to tell you about jumping bristletails? First of all, they aren’t silverfish, although they’re often misidentified as such. Moreover, they don’t invade homes and aren’t pests. The reason for their name is obvious when you see how they can jump—as much as 4 inches (10 cm) forward if a predator’s heavy in pursuit. In addition, there are about 250 species around the world, including the Arctic, with 24 of them in North America. However, jumping bristletails are harmless, beneficial recyclers of organic matter.

Jumping bristletails are most active at night, but they can be found in the daytime in leaf litter and other decomposing matter, under bark, stones, and rocks, and in crevices. Most like moist soil and wooded habitats, but some are found in grassy and rocky environments.

Jumping bristletails were among the very first insects on earth. Fossil evidence shows they first appeared along with arachnids in the mid-Devonian period, which was 419.2 to 358.9 million years ago. Further, they belong to the order Archaeognatha (are-KAY-ogg-NATHA or r-kee-OGG-nath-uh), which is a name formed by the Greek words archaeos, meaning ancient, and gnatha, meaning jaw. Also, the jumping bristletail’s “ancient jaw” is notable because it has only one condyle (a bone that looks like a knuckle) attaching it to the head, whereas other insects have two. Most jumping bristletails are in the family Machilidae.

Jumping bristletails have three body sections: head, thorax, and abdomen. Their body, which has a distinctive hump over the thorax, is long and reaches an adult length of about 0.8 inches (20 mm), not counting the “tails.”  Brownish or yellowish, partially reflective scales cover the body. They have six legs but no wings. Three long “tails” extend from the tip of their abdomen, and that’s the easiest way to identify them quickly. However, the tails aren’t really tails—the center one is called the terminal filament (part of the reproductive system), and the outer two are cerci (in these insects, they may serve as sensory organs or help to propel the body forward, or both).

In addition, the head has two large, compound eyes, which sit toward the back and touch each other. Also, there are three simple eyes, called ocelli, each with only a single lens; their purpose is to detect the intensity of light and dark. The mouthparts are designed for chewing soft, organic matter. The head also has two long antennae that resemble a chain of beads; they’re very flexible and often swept backward. 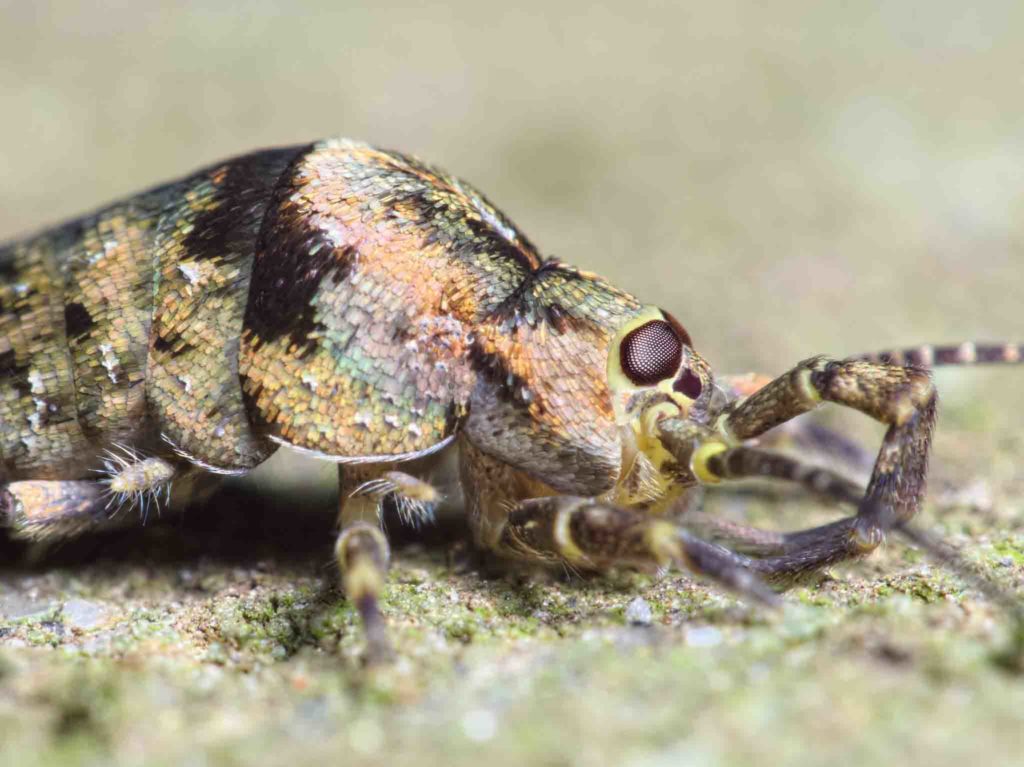 On the underside of the abdomen are many small, moveable appendages that give the appearance of bristles. They’re called style (plural: styli) and scientists speculate that eons ago they may have been limbs. However, the styli don’t play a role in the jumping ability of these insects—to do that they thrust their abdominal muscles rapidly and forcefully against the ground, which gives them lift-off.

At first glance, jumping bristletails look like silverfish. That’s because they’re wingless, scurry around in much the same way, and are fast runners. There are differences, though.

Life cycle
Jumping bristletails undergo ametabolous development, meaning they progress through three life stages: from egg to nymph to adult. When they leave their egg they look like tiny versions of their parents and gradually grow into full adult size. Unlike other insects, they’ll molt throughout their lives—up to 35 times.

Nymphs don’t reach sexual maturity until they’ve molted at least eight times, which takes about two years. Even then, their sexual activity is strictly solitary. Here’s why: The male spins a thread from his abdomen, attaches it to a surface, and then places packets of his sperm (spermatophores) along its length. It’s then left for a female to find. That is a rather haphazard system, so males of some species try to better their odds by luring females through elaborate courtship rituals, but never do they “couple” as, well, a couple! Females will lay about 30 fertilized eggs (in crevices) each time. The eggs may stay dormant for a year before hatching. Females don’t store sperm and acquire a new spermatophore before each egg-laying event.