You are at: Home » Birds » World’s smartest birds

Move over, humans! Crows, ravens, jays, magpies, nutcrackers, treepies, and choughs have turned “you’re a birdbrain” into a compliment. The world’s smartest birds are smarter than you think!

Louis Lefebvre, a behaviorist at McGill University in Montreal who is studying bird intelligence, has developed a test for gauging bird IQ. It’s based on how innovative birds are when faced with different challenges. His winner for the smartest bird of all is the American Crow (also called the Common Crow), and many other researchers agree.

The American Crow, however, is just the smartest in a whole family of whip-smart birds. The family, Corvidae, consists of ravens, rooks, jays, nutcrackers, magpies, jackdaws, choughs, and treepies. Controlled lab studies and thousands of observations in the wild have shown how remarkably advanced these birds are in their problem-solving skills.

Corvidae — corvids, for short — consists of 23 genera containing about 126 species. Corvids are found everywhere in the world, except Antarctica. Here are a few examples of their brainpower. 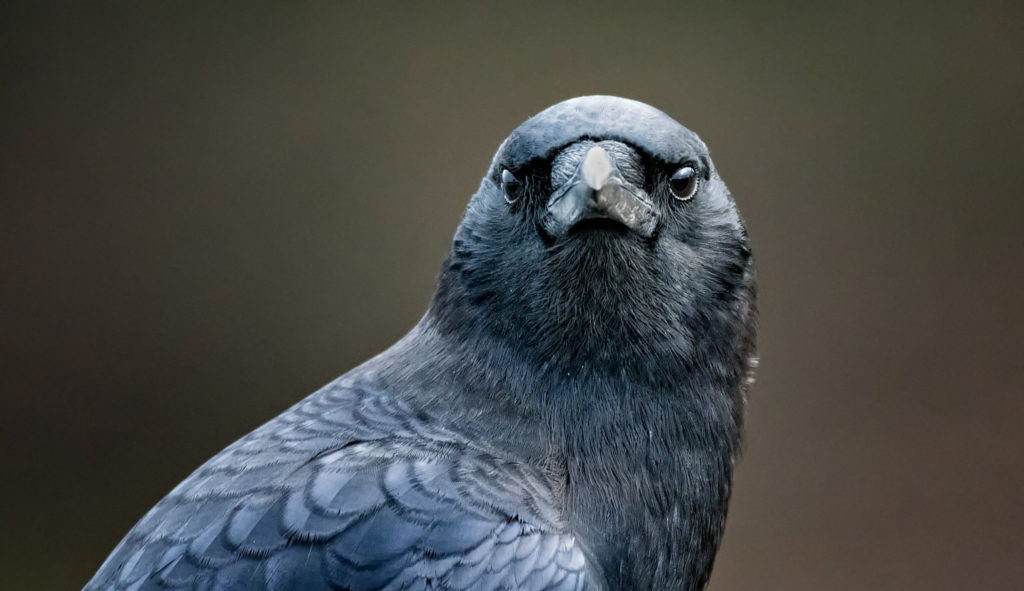 Crows are second only to humans in intelligence. Their brain-to-body weight ratio is equal to that of the great apes and cetaceans (whales, dolphins, porpoises). In some research tests, they’re smarter than apes — and only slightly less than humans!¹ Crows can make and customize tools, reason, understand causality, count up to five and remember human faces. Here’s one solving a puzzle that required eight steps:

Hooded Crows (Corvus cornix) in Israel use bread crumbs to bait-fish, and in Norway and Sweden, they drag fishing lines out of the water to get at the hooked fish. New Caledonian Crows (Corvus moneduloides) are famous for their innovations and tool-making, including “knives” made of stiff leaves.

Carrion Crows (Corvus corone) in Japan drop hard-to-crush nuts on the roadway at intersections so that moving traffic will crush them open. That may not seem so spectacular, but the crows also wait for the traffic light to change to red and then walk out in front of the stopped traffic to gather the nuts!  Watch them here

Crows are in the genus Corvus. There are about 32 crow species, plus several subspecies. Three species inhabit the U.S.: American Crow, Northwestern Crow, and Fish Crow. Another species, the Hawaiian Crow, is extinct in the wild but can be seen at the San Diego Zoo, where a captive breeding program is ongoing. 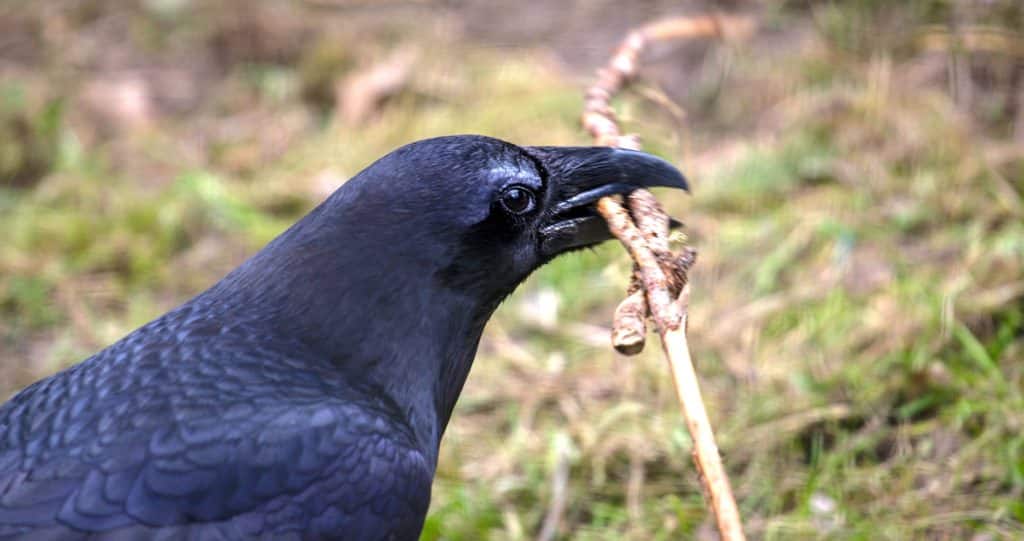 Ravens are nearly as smart as crows. They’re cooperative hunters who often work in pairs — one to distract a bird or mammal parent and the other to grab the bird’s egg or a newborn animal. They’re also known for their ability to understand cause and effect and to solve increasingly complicated problems. Recent research has shown they’re more technically successful in planning ahead than 4-year-old children.

While crows are probably best known for playful behavior, ravens are playful, too. Here’s a very cute raven lying on its back and playing with a twig. One researcher reports observing a raven who would carry away a large chunk of frozen suet by first using its beak to carve a circle around the entire chunk it wanted, instead of chipping away at the suet for numerous small pieces. You’ll see in this video a wild raven who correctly reasoned that humans could help him solve a serious problem.

Ravens are in the genus, Corvus, along with crows. There are 10 raven species in the world, plus a couple of subspecies. Two species inhabit the U.S., the Common Raven, Corvus corax, and the Chihuahuan Raven, Corvus cryptoleucus. Jackdaws are the smallest birds in Corvus, but that doesn’t mean they lack brain power. They’re highly curious, with a fondness for bright, shiny things, and may sometimes carry them away. They’re easily trained to perform tricks and to speak and have been observed using tools. Lab research shows they can interpret human communicative gestures to find hidden food, such as when a human gazes at food or points to it. They’re also the only non-primates known to communicate with each other using their eyes. They also have complex social and food-sharing behavior.

Some populations of Jackdaws follow deer herds and pluck their hair for nests. In England and Wales, they’ve been known to remove caps from full bottles of delivered milk sitting on porches and drinking from the contents. There are several stories of jackdaws caring for injured relatives. 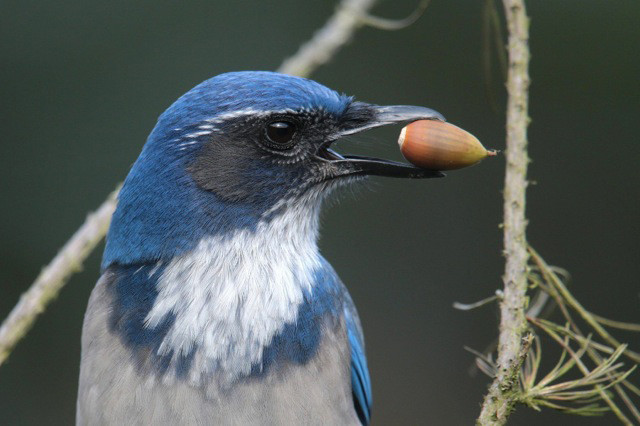 Jays are a favorite of many backyard birdwatchers. They’re boisterous, energetic and noticeably intelligent.

Scrub jays are the only animals besides humans that plan their actions based on how they’ll feel in the future. They plan for tomorrow’s breakfast: Studies have shown they plan what kind of food they’ll want for breakfast the next morning, how much and where they’ll consume it. Then they store away the right amount, in the right place. Another example of jay intelligence is a captive Blue Jay who used a scrap of paper from the bottom of his cage as a tool to reach a pile of food outside his cage. Other jays who watched him soon were using the same method. 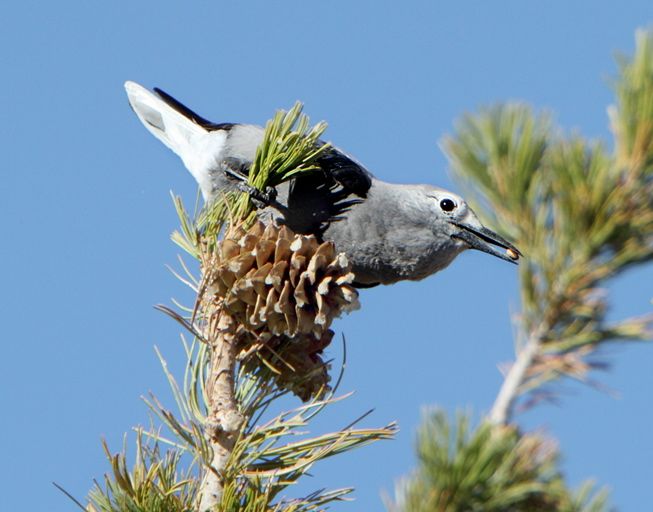 Where will it hide the pine seed? Clark’s Nutcracker (Nucifraga columbiana). (Vernon / Wiki; cc by 2.0)

Nutcrackers (pronounced like it’s spelled) are noted for their amazing ability to remember things about their environment and their orientation within it.https://youtu.be/tJ-II8J4KIk

Clark’s Nutcrackers, for example, feed on pine seeds and every summer they hide up to 30,000 seeds in preparation for winter — and, laboratory tests show they remember where almost all of them are! Each cache contains one to three seeds, so that’s about 10,000 to 15,000 different locations. The nutcrackers live in areas that tend to get lots of snowfall that hides cache locations. Corvid expert, Jennifer Campbell-Smith, says, “These caches are made during the summer, so in the winter the snow obscures and changes the landscape. That means the birds have to use various levels of landmarks and triangulation to remember the locations…sometimes requiring the birds to burrow under the snow to reach them.
Clark’s Nutcrackers are also smart enough to alter their behavior if they think they’re being watched while hiding a seed. And, they can distinguish between numbers, always picking the larger pile of seeds when offered — even when the piles are very close in number.
There are three species of nutcrackers in the world. The only one inhabiting the U.S. is Clark’s Nutcracker, Nucifraga columbiana. The Spotted Nutcracker, Nucifraga caryocatactes, inhabits Europe and Asia and the Large Spotted Nutcracker, (Nucifraga multipunctata) is found in the Himalayas. 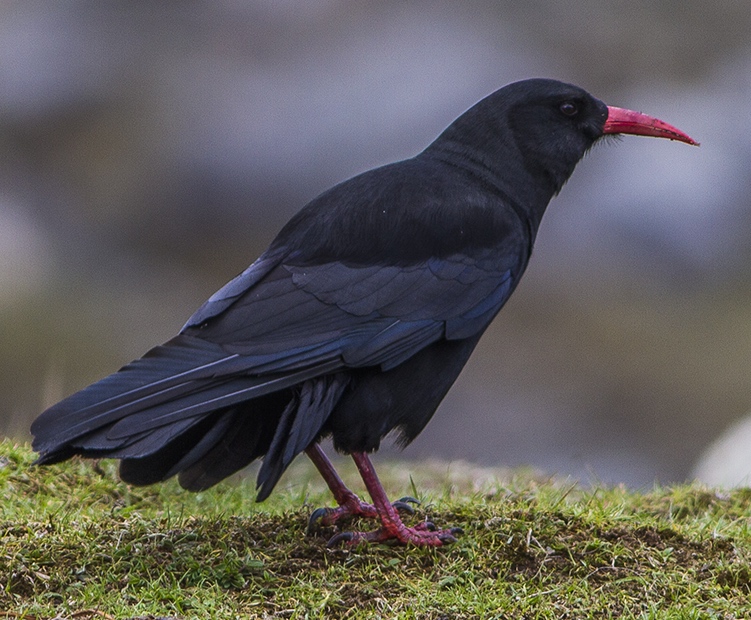 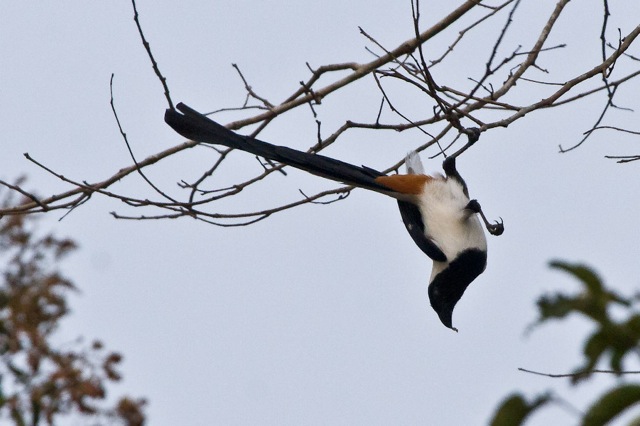 Treepies (pronounced “tree·pies”) are 11 species of birds that inhabit Southeast Asia. Smart, adaptable, agile and acrobatic, they tend to live in small flocks when not in breeding season. They’re adept at mimicking other birds. The “pie” in their name refers to the black-and-white plumage that many of them have. 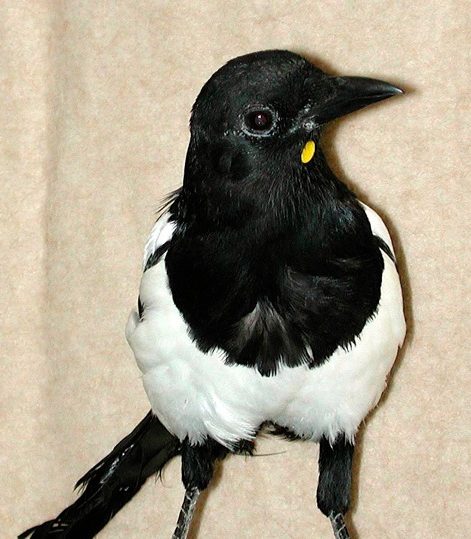 Magpies (pronounced mag·pies) can recognize themselves in a mirror. The only other animals known to share this ability are Chimpanzees, dolphins, elephants, Giant Manta Rays and humans of about two years of age and older. Magpies are capable of playing a game of hide-and-seek with performance comparable to that of 3-to-5-year-old-children.² The “pie” in their name refers to the black-and-white plumage that many of them have.

Not all birds with the word “magpie” in their name are corvids; for example, the Magpie Goose, Magpie Shrike, and the Australian Magpie aren’t corvids. The U.S. has two species of true magpies: the Black-billed, Pica hudsonia, and the Yellow-billed, Pica nuttalli. There are 11 other species in the world; all of them inhabit Europe and Asia.

Click here to watch “Gertie,” a Eurasian Magpie look at herself in a mirror, notice a spot on her throat put there by a researcher, and try to remove it. Magpies have complex emotions and are known for holding “funerals” for a fallen friend, including “bouquets” of grasses. And, here’s Rooney, an adorable and very verbal magpie.

¹Crows as Clever as Great Apes, Study Says
²The Conversation