You are at: Home » Birds » These hummingbirds migrate thousands of miles

A tiny hummingbird called the Calliope flies from Central America to the United States and Canada every spring—and back again in the fall! Some Ruby-throated Hummingbirds fly a path north across the Gulf of Mexico to the US—that’s non-stop, more than five hundred miles over water—and return in the fall! They’re just two of the remarkable North American hummingbirds that migrate long distances. Just imagine the endurance and determination that requires! Imagine, too, a nickel in your hand—because that’s how much they weigh!

A trip filled with danger

Their journey is fraught with danger. Weather extremes, for one: They may face extraordinary heat or cold, or drought conditions that make water hard to find; heavy rains can force them to the ground; strong winds may blow them into obstacles.

Predators are another danger. Larger birds, rodents, snakes, and even large dragonflies and spiders are known to kill hummingbirds. Cats, too, are a threat. Windows kill when they reflect trees and fool birds that crash into them.

With such obstacles ahead, what compels these tiny birds to migrate? Well, a couple of things. First, as winter ends and hours of daylight increase, it triggers a hormonal change that urges them to start moving north (and vice versa in the fall). Secondly, they’re tropical birds that began expanding their ranges northward in the summer and discovered abundant food and nesting resources in NA.

They’re noted for drinking nectar, which gives the impression that it’s their primary food. But, as Hummingbirds.net aptly puts it “. . . nectar is just the fuel to power their fly-catching activity . . .” Insects, in fact, are their main diet. So, when fall comes, and bugs go into decline, the birds have another strong incentive to move south.1

Here are the nine valiant hummingbirds that migrate to NA, the areas they go to and from, and the periods of their expected arrival and departure. Also, a bit of additional information about them. The time they arrive in your area will depend on your location. For instance, in the colder northern states, they’ll come a bit later in the spring and leave earlier in the fall. 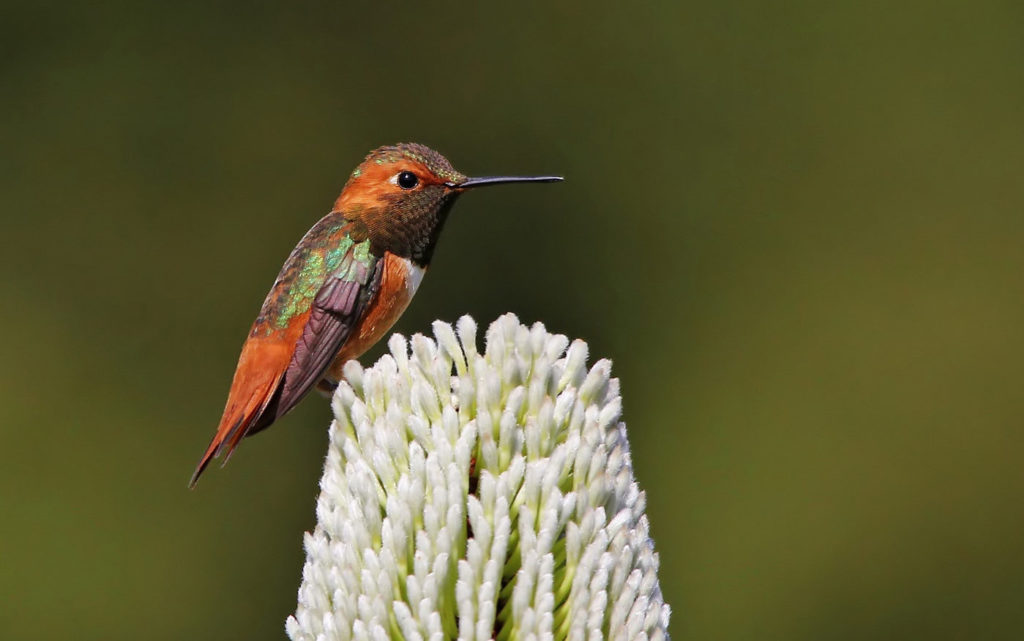 The Allen’s has a strong resemblance to the Rufous Hummingbird. Males and females look alike, except that males reveal an iridescent reddish-orange throat when the sun strikes it, and a female’s throat is speckled. They move up- and downslope following seasonal food sources, between the central Pacific Coast of Mexico and the northern part of the US West Coast. 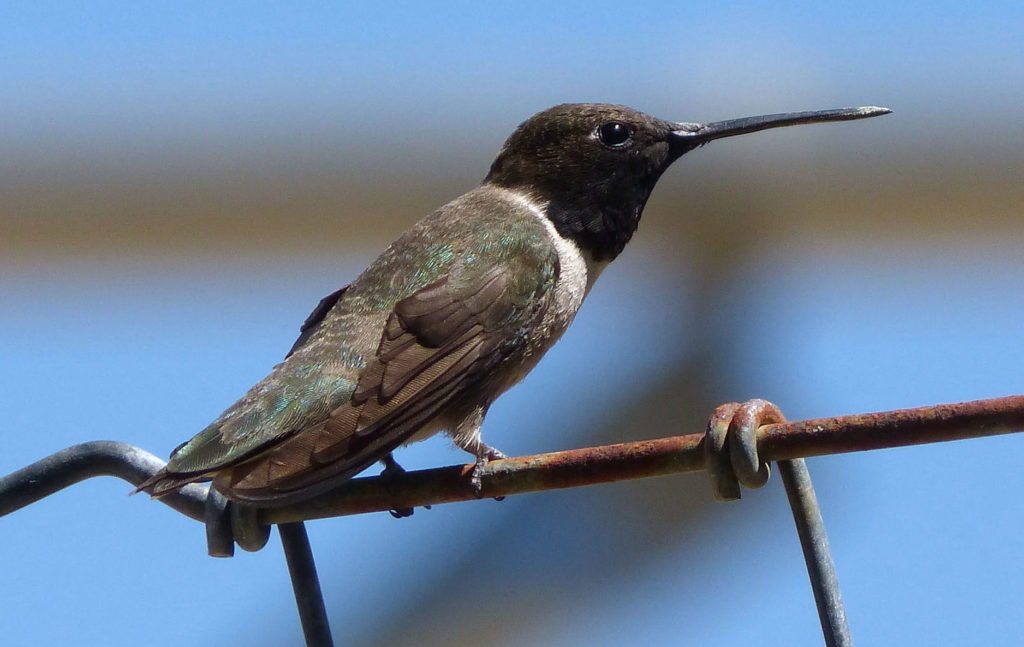 Black-chinned males have a black face and chin, and the base of the throat flashes purple in the sun. Females are lighter overall, with a pale throat. During courtship and in territorial disputes, males display by diving 66 to 100 feet (20 to 30 m) to impress females. They migrate from Mexico and the western US to southern British Columbia and back. 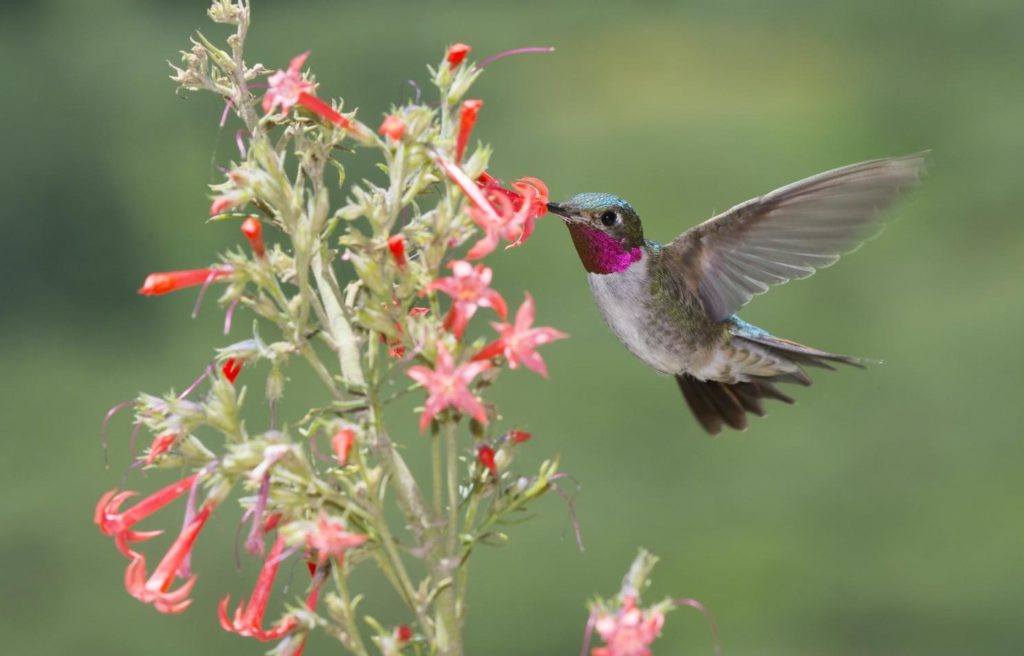 Broad-tailed males have a throat patch that flashes rose-magenta in the sun, and females have green spots on their throat and cheeks. Their summer range can have some very cold nights, so they rest in a state of torpor (a reduced metabolic rate), which lowers their body temperature to 54°F (12.2°C). They migrate between Central America and scattered areas of the western US, including the south-central Rockies. 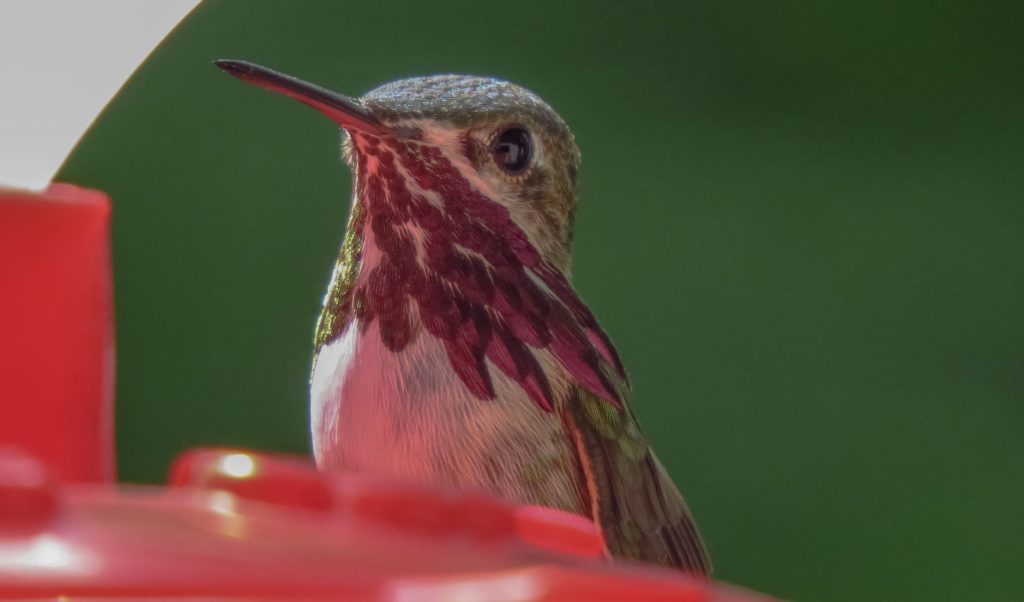 Males and females are greenish above, and the male discloses a magenta throat when seen in the light. They’re named after the muse in Greek mythology who presides over eloquence and epic poetry. That doesn’t mean these birds are delicate in disposition. They’re the smallest birds in the US and Canada, but they’re feisty and known to chase birds as large as Great-tailed Hawks! They are the smallest migrating birds in the world and move between Central America and the western US and Canada. 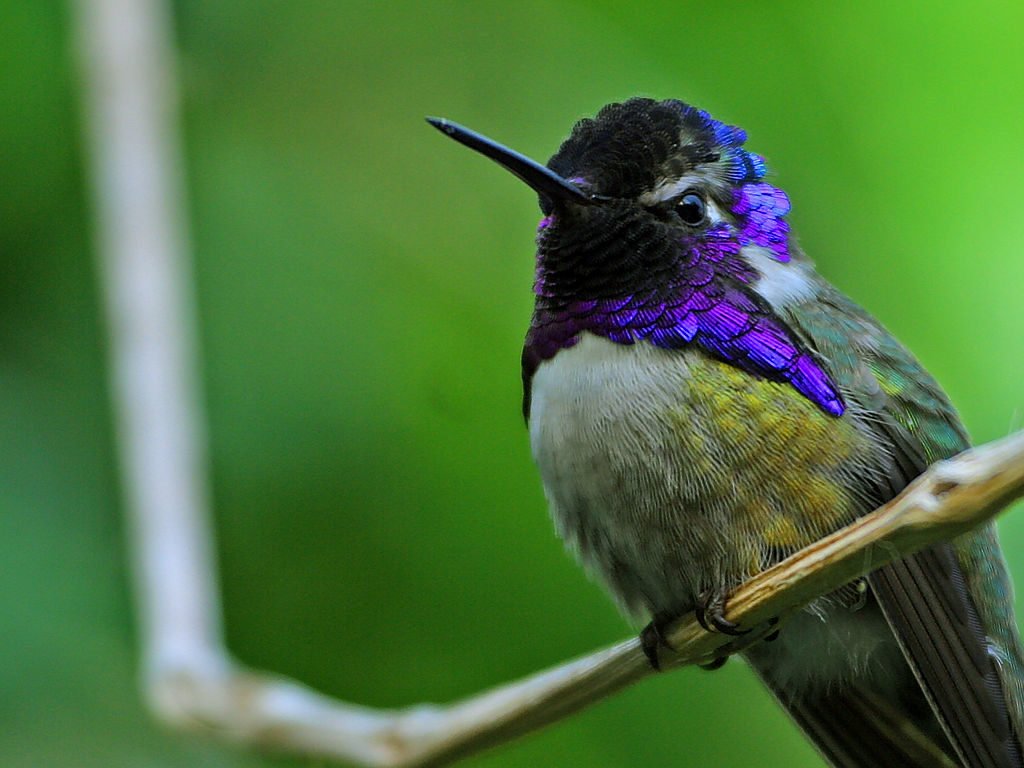 Male and female Costa’s have a green back, and males have an iridescent purple crown and throat. They need the nectar from at least 1,840 flowers to meet their daily energy needs! They migrate between Mexico and Baja California, Mexico and the southwestern US, but occasionally one is seen as far north as Alaska. 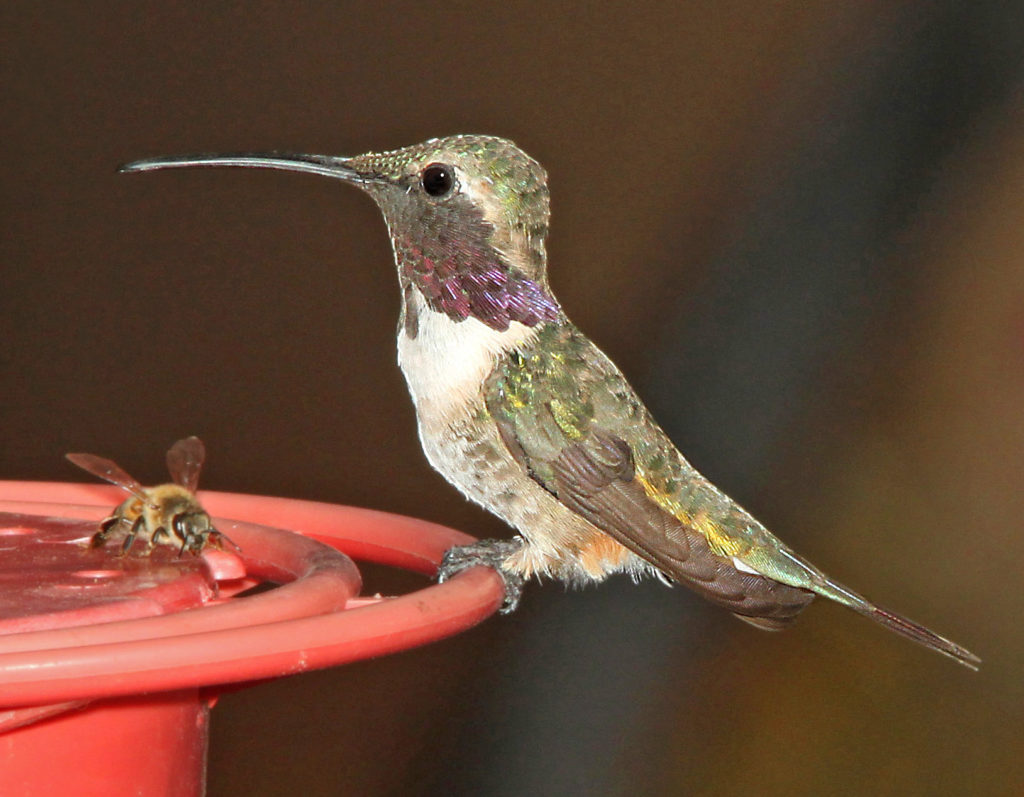 Male and female Lucifer Hummingbirds have a green back, narrow forked tail, and curved bill. The male has a beautiful purple throat when light catches it. They migrate between Central America and extreme southern Arizona, New Mexico, and Texas. They’re found in scrubby areas and favor agave flowers when available. 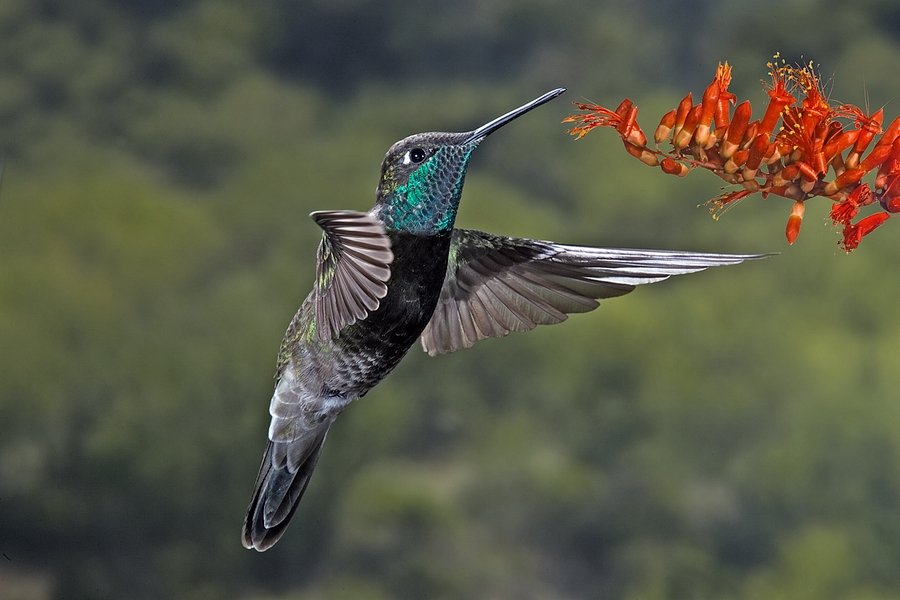 Rivoli’s Hummingbird is also known as the Magnificent Hummingbird. Judging by their appearance, “Magnificent” seems the more suitable name, doesn’t it? When light strikes them just right, they’re a blaze of color, especially the male. They’re the second-largest hummingbirds north of Mexico and have one of the highest recorded heart rates of any vertebrate in the world at 420 to 1,200 beats per minute. They migrate between Central America and the southern tip of Arizona and New Mexico. 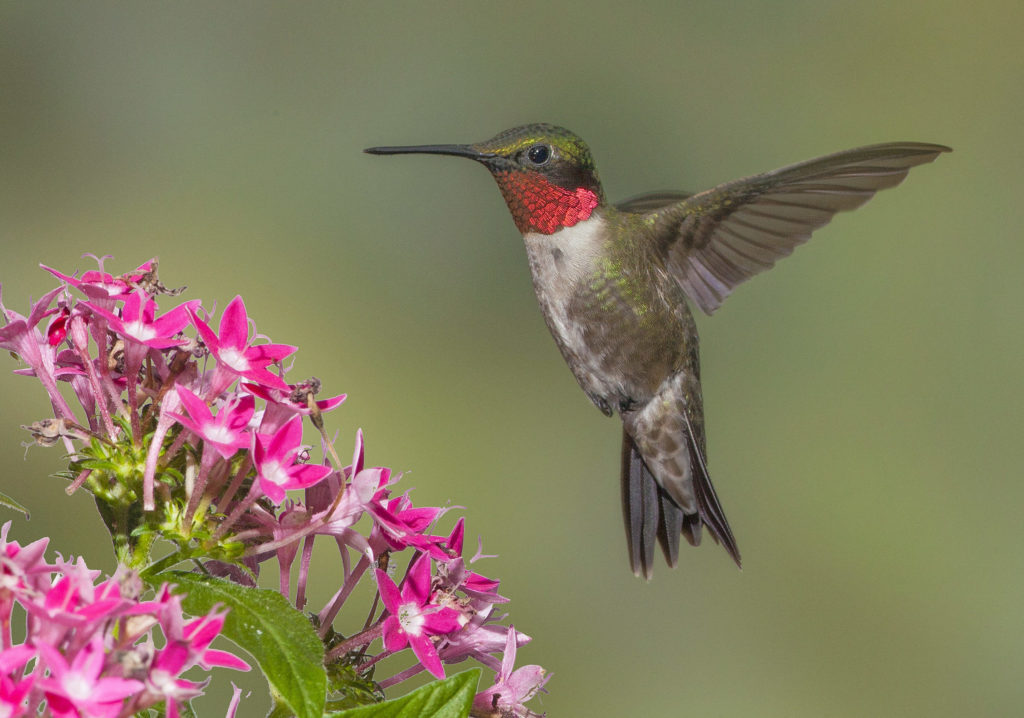 Ruby-throated Hummingbirds are the only hummingbirds that breed in eastern NA. We may see them fly or perch, but we’ll never see them walk. That’s because, like all other hummingbirds, their legs are too short for that. The best they can do is shuffle along on a branch. They migrate between Central America and the US, mostly east of the Mississippi River, and into Canada. Thousands migrate back and forth across the Gulf of Mexico, five hundred miles, non-stop each way. 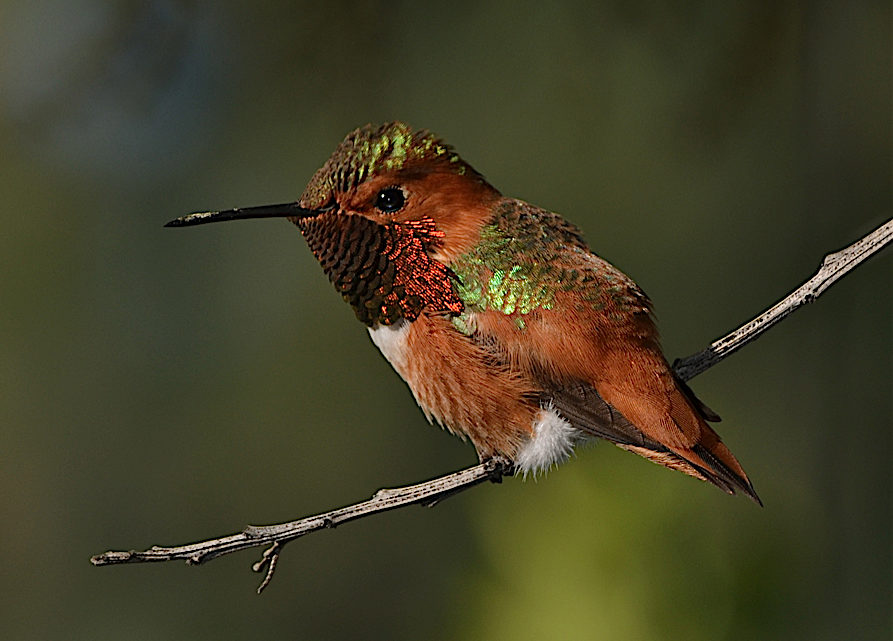 Tiny but rugged, Rufous Hummingbirds make one of the longest migrations in the world, as measured by body size. They travel 3,900 miles between Mexico and western NA and southern Alaska. They’re feisty and territorial at feeders.

1 We still can assist hummingbirds during their migration by providing nectar to help them along. So, hang nectar feeders out a little ahead of when you expect the first arrivals. The nectar is simply a sugar solution, and it’s easy to make: four parts water to one part sugar, and don’t use red dye, as it’s unhealthy for them. Shake the solution until all sugar is dissolved. Refrigerate any unused portion. That’s it! Keep the feeder fresh and replace the solution every few days. It’ll last longer in cool weather, but don’t let it become murky, a sure indicator that it’s getting moldy.)